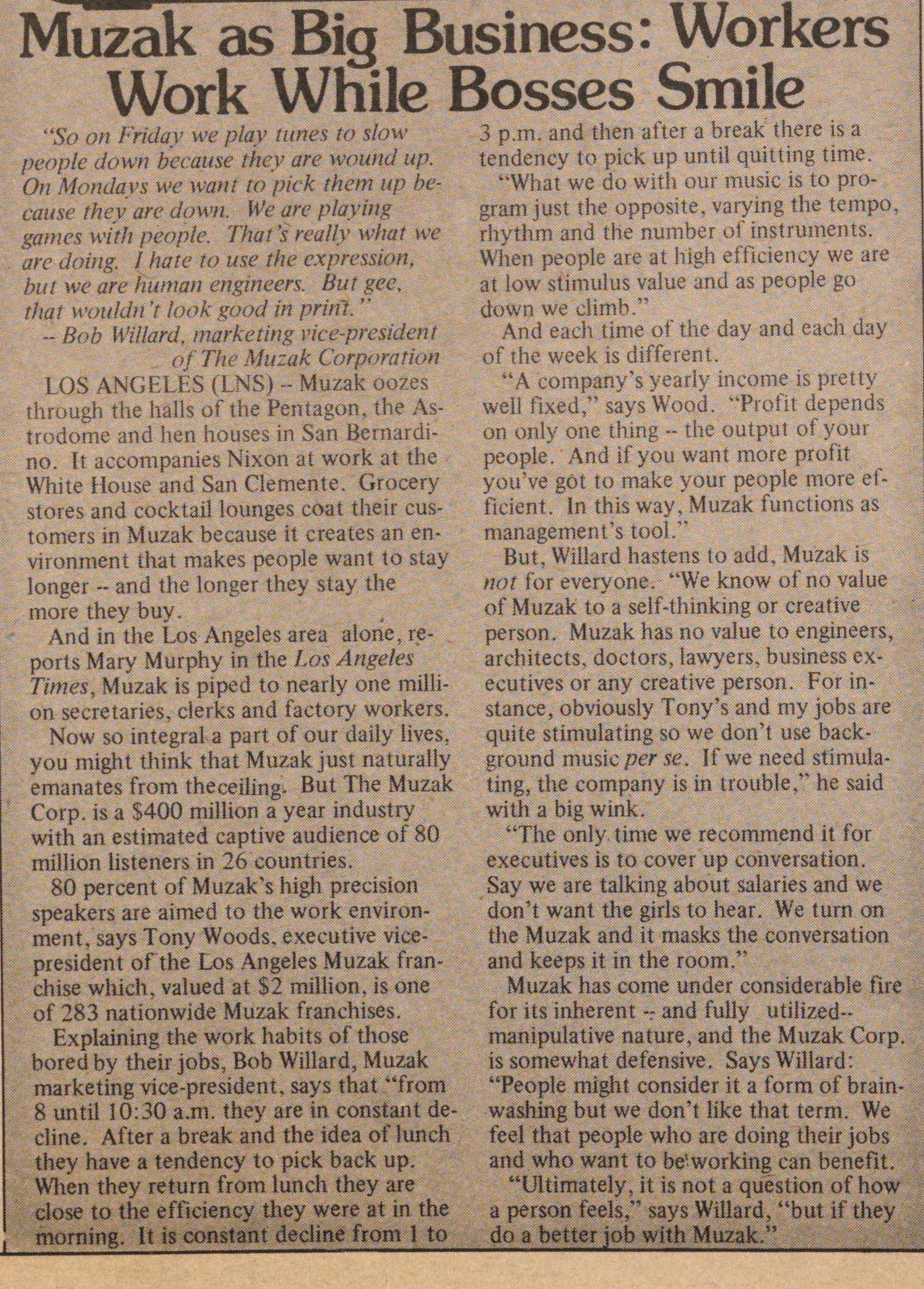 "So on Friday we play tunes to stow people down becau.se they are wouttd up. On Mondays we want to piek them up be-, cause they are down. We are pktying gantes witli people. Thai 's rcally witat we are doing. I ha te to use the expression, bu! we are human engineers. But gec. tliat wouldn 't look good in priiít. " - Bob Willard, marketing vice-prcsidetit of The Muzak Corporation LOS ANGELES (LNS) - Muzak oozes through the halls of the Pentagon, the Astrodome and hen houses in San Bemardino. It accompanies Nixon at work at the White House and San Clemente. Grocery stores and cocktail lounges coat their customers in Muzak because it creates an environment that makes people want to stay longer - and the longer they stay the more they buy. And in the Los Angeles área alone, reports Mary Murphy in the Los Angeles Times, Muzak is piped to nearly one million secretaries, clerks and factory workers. Now so integral a part of our daily lives. you might think that Muzak just naturally emanates from But The Muzak Corp. is a $400 million a year industry with an estimated captive audience of 80 million listeners in 26 countries. 80 percent of Muzak's high precisión speakers are aimed to the work environment, says Tony Woods, executive vicepresident of the Los Angeles Muzak franchise which, valued at $2 million, is one of 283 nationwide Muzak franchises. Explaining the work habits of those horedby their jobs, Bob Willard, Muzak marketing vice -president, says that "from 8 until 10:30 a.m. they are in constant decline. After a break and the idea of lunch they have a tendency to piek back up. When they return from lunch they are close to the efficiency they were at in the moming. It ts constant decline from 1 to 3 p.m. and then after a break there is a tendency to piek up until quitting time. 'What we dü with our music is to program just the opposite, varying the tempo, rhythm and the nuniber of instruments. When people are at high efficiency we are at low stimulus value and as people go down we climb." And each time of the day and each day of the week is different. "A company's yearly income is pretty well fixed," says Wood. "Profit depends on only one thing -- the output of your people. And if you want more profit you've gót to make your people more efficiënt. In this way, Muzak functions as management's tooi." But, Willard hastens to add, Muzak is nat for everyone. "We know of no value of Muzak to a self-thinking or creative person. Muzak has no value to engineers, architects, doctors, lawyers, business executives or any creative person. For instance, obviously Tony's and my jobs are quite stimulating so we don't use background music per se. If we need stimulating, the company is in trouble," he said with a big wink. "The only time we recommend it for executives is to cover up conversation. Say we are talking about salaries and we don't want the girls to hear. We turn on the Muzak and it masks the conversation and keeps it in the room." Muzak has come under considerable fire for its inherent - and fully utilizedmanipulative nature, and the Muzak Corp. issomewhat defensive. Says Willard: "People might consider it a form of brainwashing but we don't like that term. We feel that people who are doing their jobs and who want to be'working can benefit. "Ultimately, it is not a quèstion of how a person feels," says Willard, "but if they do a better job with Muzak."