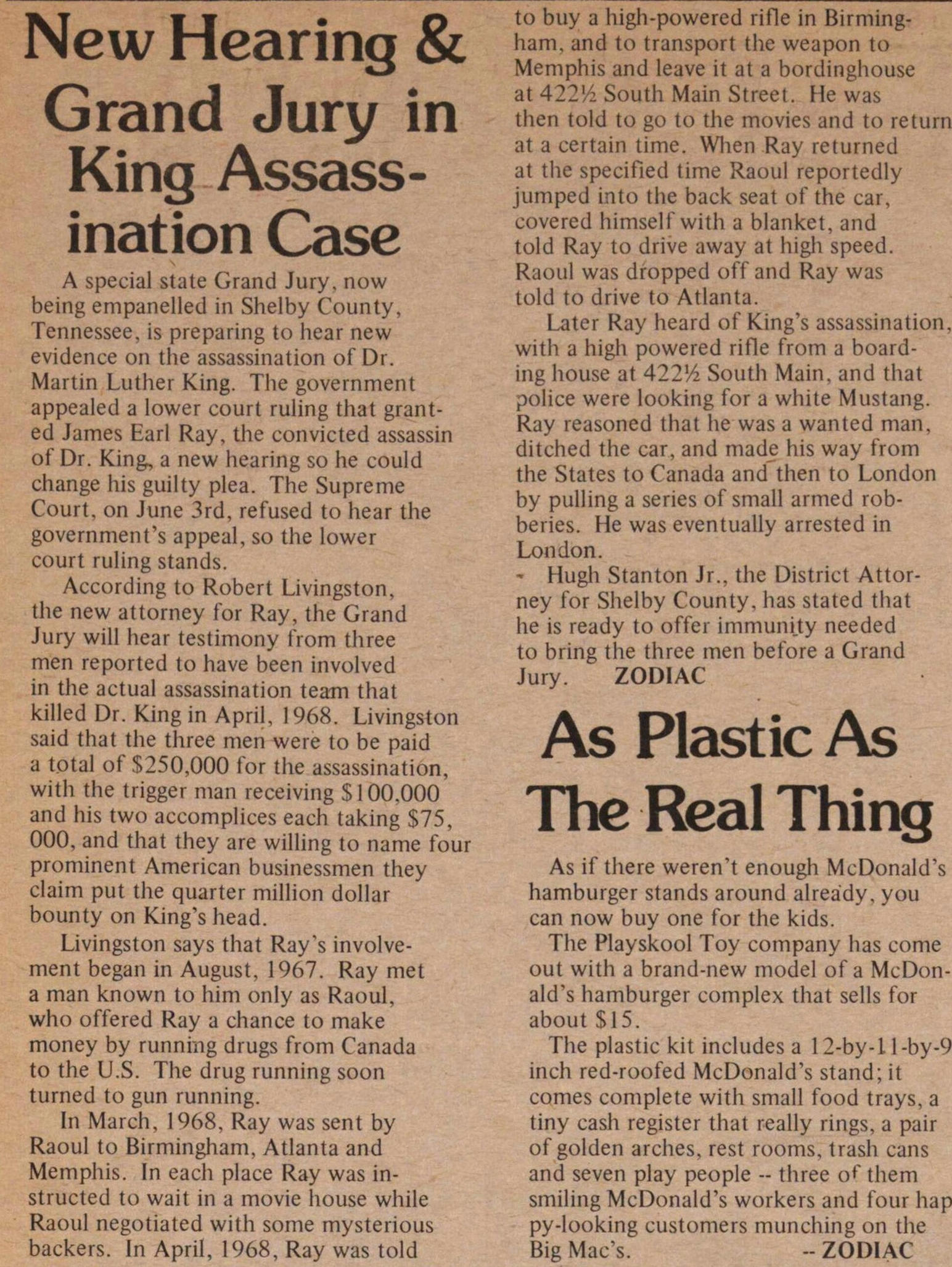 A special state Grand Jury. now being empanelled in Shelby County, Tennessee. is preparing to hear new evidence on the assassination of Dr. Martin Luther King. The government appealed a lower court ruling that granted James Earl Ray, the convicted assassin of Dr. King, a new hearing so he could change his guilty plea. The Supreme Court. on June 3rd, refused to hear the government's appeal, so the lower court ruling stands. According to Robert Livingston, the new attorney for Ray, the Grand Jury will hear testimony f rom three men reported to have been involved in the actual assassination team that killed Dr. King in April, 1968. Livingston said that the three men were to be paid a total of $250,000 for the assassination, with the trigger man receiving SI 00.000 and his two accomplices each taking $75, 000, and that they are willing to name four prominent American businessmen they claim put the quarter million dollar bounty on King's head. Livingston says that Ray"s involvement began in August, 1967. Ray met a man known to him only as Raoul, who offered Ray a chance to make money by running drugs from Canada to the U.S. The drug running soon turned to gun running. In March, 1968. Ray was sent by Raoul to Birmingham, Atlanta and Memphis. In each place Ray was instructed to wait in a movie house while Raoul negotiated with some mysterious backers. In April, 1968, Ray was told to buy a liigh-powercd rifle in Birmingliam. and to transport the weapon to Memphis and leave it at a bordinghouse at 4225a South Main Streel. He was then told to go to the movies and to return at a certain time. When Ray returned at the specified time Raoul reportedly jumped into the back seat of the car, covered himself with a blanket, and told Ray to drive away at high speed. Raoul was dropped off and Ray was told to drive to Atlanta. Later Ray heard of King's assassination, with a high powered rifle from a boarding house at 422Vi South Main, and that pólice were looking for a white Mustang. Ray reasoned that he was a wanted man, ditched the car, and made his way trom the States to Canada and then to London by puiling a series of small armed robberies. He was eventually arrested in London. - Hugh Stanton Jr.. the District Attorney for Shelby County. has stated that he is ready to offer immuni.ty needed to bring the three men before a Grand Jury.