Why Are The Police Lying? 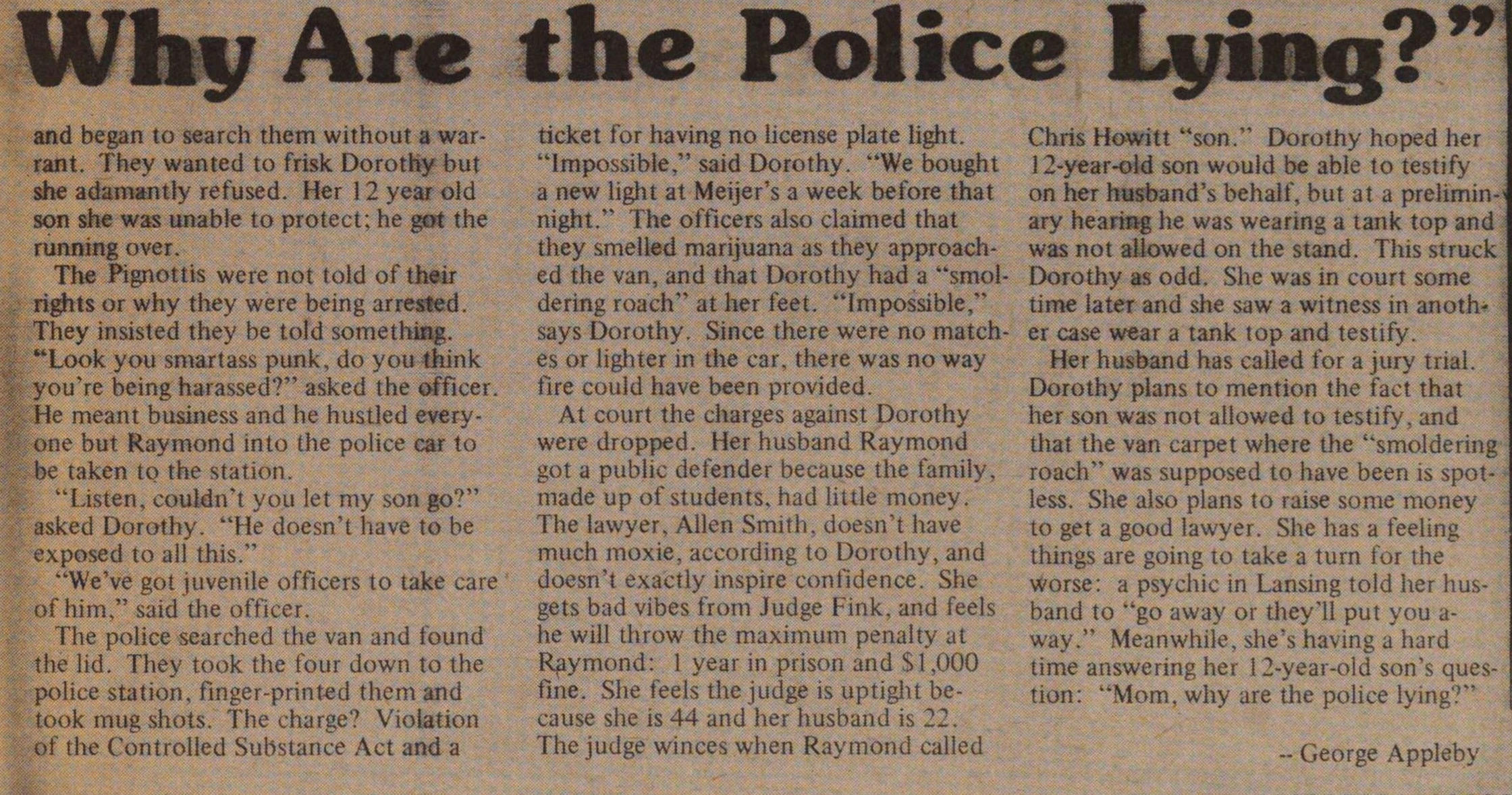 and began to search them without a warrant. They wanted to frisk Dorothy but she adamantly refused. Her 12 year old son she was unable to protect; he got the running over.

The Pignottis were not told of their rights or why they were being arrested. They insisted they be told something. “Look you smartass punk, do you think you’re being harassed?” asked the officer. He meant business and he hustled everyone but Raymond into the police car to be taken to the station.

“Listen, couldn’t you let my son go?” asked Dorothy. “He doesn’t have to be exposed to all this.”

“We’ve got juvenile officers to take care of him,” said the officer.

The police searched the van and found the lid. They took the four down to the police station, finger-printed them and took mug shots. The charge? Violation of the Controlled Substance Act and a ticket for having no license plate light. “Impossible,” said Dorothy. “We bought a new light at Meijer’s a week before that night.” The officers also claimed that they smelled marijuana as they approached the van, and that Dorothy had a “smoldering roach” at her feet. “Impossible,” says Dorothy. Since there were no matches or lighter in the car, there was no way fire could have been provided.

At court the charges against Dorothy were dropped. Her husband Raymond got a public defender because the family, made up of students, had little money. The lawyer, Allen Smith, doesn’t have much moxie, according to Dorothy, and doesn’t exactly inspire confidence. She gets bad vibes from Judge Fink, and feels he will throw the maximum penalty at Raymond: 1 year in prison and $1,000 fine. She feels the judge is uptight because she is 44 and her husband is 22. The judge winces when Raymond called Chris Howitt “son.” Dorothy hoped her 12-year-old son would be able to testify on her husband’s behalf, but at a preliminary hearing he was wearing a tank top and was not allowed on the stand. This struck Dorothy as odd. She was in court some time later and she saw a witness in another case wear a tank top and testify.

Her husband has called for a jury trial. Dorothy plans to mention the fact that her son was not allowed to testify, and that the van carpet where the ‘“smoldering roach” was supposed to have been is spotless. She also plans to raise some money to get a good lawyer. She has a feeling things are going to take a turn for the worse: a psychic in Lansing told her husband to “go away or they’ll put you away.” Meanwhile, she’s having a hard time answering her 12-year-old son’s question: “Mom, why are the police lying?”