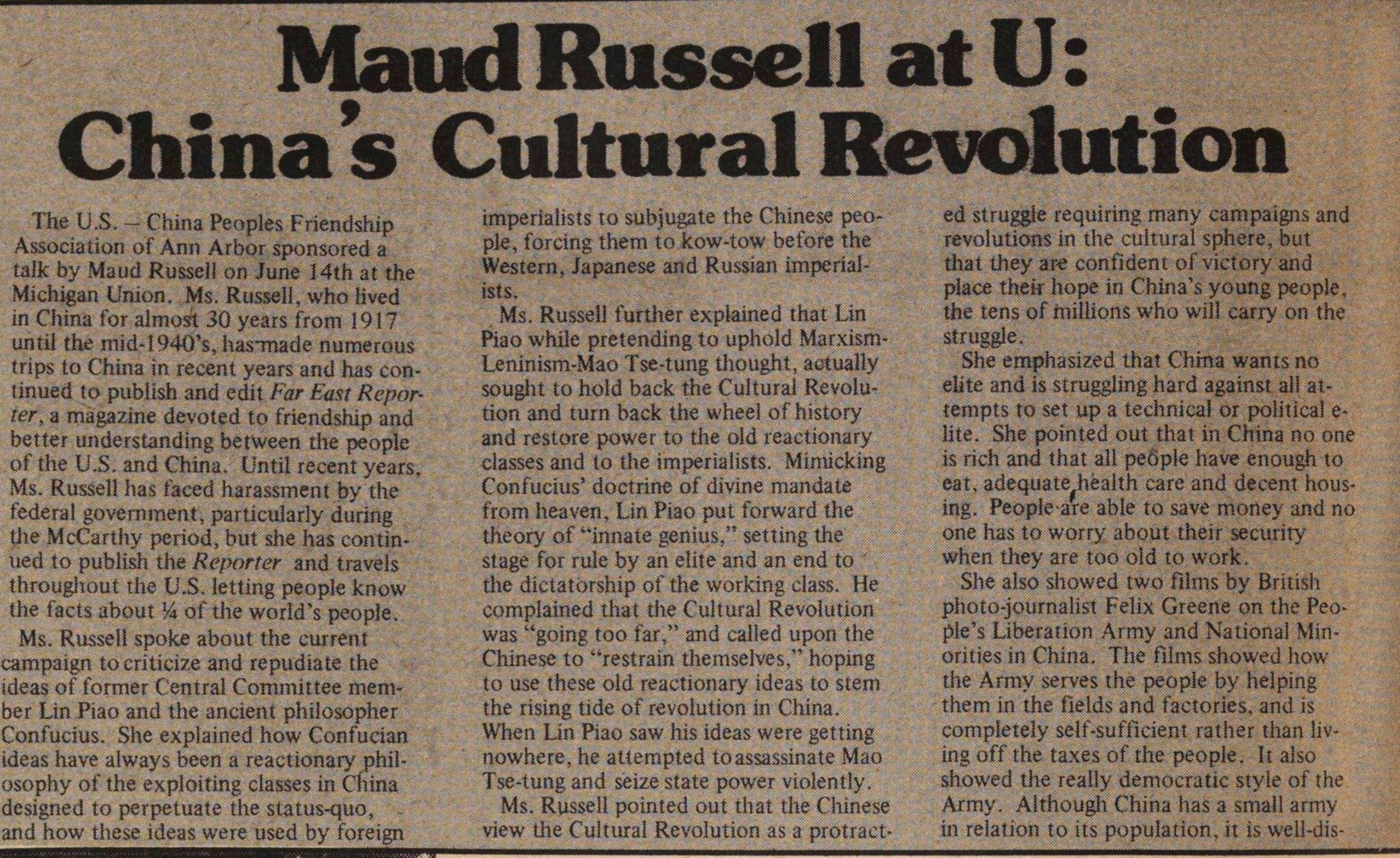 The U.S. - China Peoples Friendship Association of Ann Arbor sponsored a talk by Maud Russell on June 14th at the Michigan Union. Ms. Russeli, who lived in China for aimost 30 years from 1917 until the mid-!940's, has-made numerous trips to China in recent years and has continued to publish and edit Far East Reporter, a magazine devoted to friendship and better understanding between the people of the U.S. and China. Until recent years, Ms. Russell has faced harassment by the federal government, particularly during the McCarthy period, but she has continued to publish the Reporter and travels throughout the U.S. letting people know the facts about 1/4 of the world's people.

Ms. Russell spoke about the current campaign to criticize and repudiate the ideas of former Central Committee member Lin Piao and the ancient philosopher Confucius. She explained how Confucian ideas have always been a reactionary philosophy of the exploiting classes in China designed to perpetuate the status-quo, and how these ideas were used by foreign imperialists to subjugate the Chinese people, forcing them to kow-tow before the Western, Japanese and Russian imperialists.

Ms. Russeli further explained that Lin Piao while pretending to uphold Marxism-Leninism-Mao Tse-tung thought, actually sought to hold back the Cultural Revolution and turn back the wheel of history and restore power to the old reactionary classes and to the imperialists. Mimicking Confucius' doctrine of divine mandate from heaven, Lin Piao put forward the theory of "innate genius," setting the stage for rule by an elite and an end to the dictatorship of the working class. He complained that the Cultural Revolution was "going too far," and called upon the Chinese to "restrain themselves," hoping to use these old reactionary ideas to stem the rising tide of revolution in China. When Lin Piao saw his ideas were getting nowhere, he attempted to assassinate Mao Tse-tung and seize state power violently.

Ms. Russell pointed out that the Chinese view the Cultural Revolution as a protracted struggle requiring many campaigns and revolutions in the cultural sphere, but that they are confident of victory and place their hope in China's young people, the tens of millions who will carry on the struggle.

She emphasized that China wants no elite and is struggling hard against all attempts to set up a technical or political elite. She pointed out that in China no one is rich and that all people have enough to eat, adequate health care and decent housing. People are able to save money and no one has to worry about their security when they are too old to work.

She also showed two films by British photo-journalist Felix Greene on the People's Liberation Army and National Minorities in China. The films showed how the Army serves the people by helping them in the fields and factories, and is completely self-sufficient rather than living off the taxes of the people. It also showed the really democratic style of the Army. Although China has a small army in relation to its population. it is well-disciplined and ready for any attack.

The second film showed the daily life of China's national minorities and how they are free to develop their national cultures and languages. Mr. Greene pointed out in the film that it is significant that China has armed her national minorities with guns; something few nations can boast of.

About 90 people attended the event and many took part in the question period which followed the films and the talk by Maud Russell.

For more information about the Friendship Association in Ann Arbor and other cities and future events, call Gail at 769-7173.