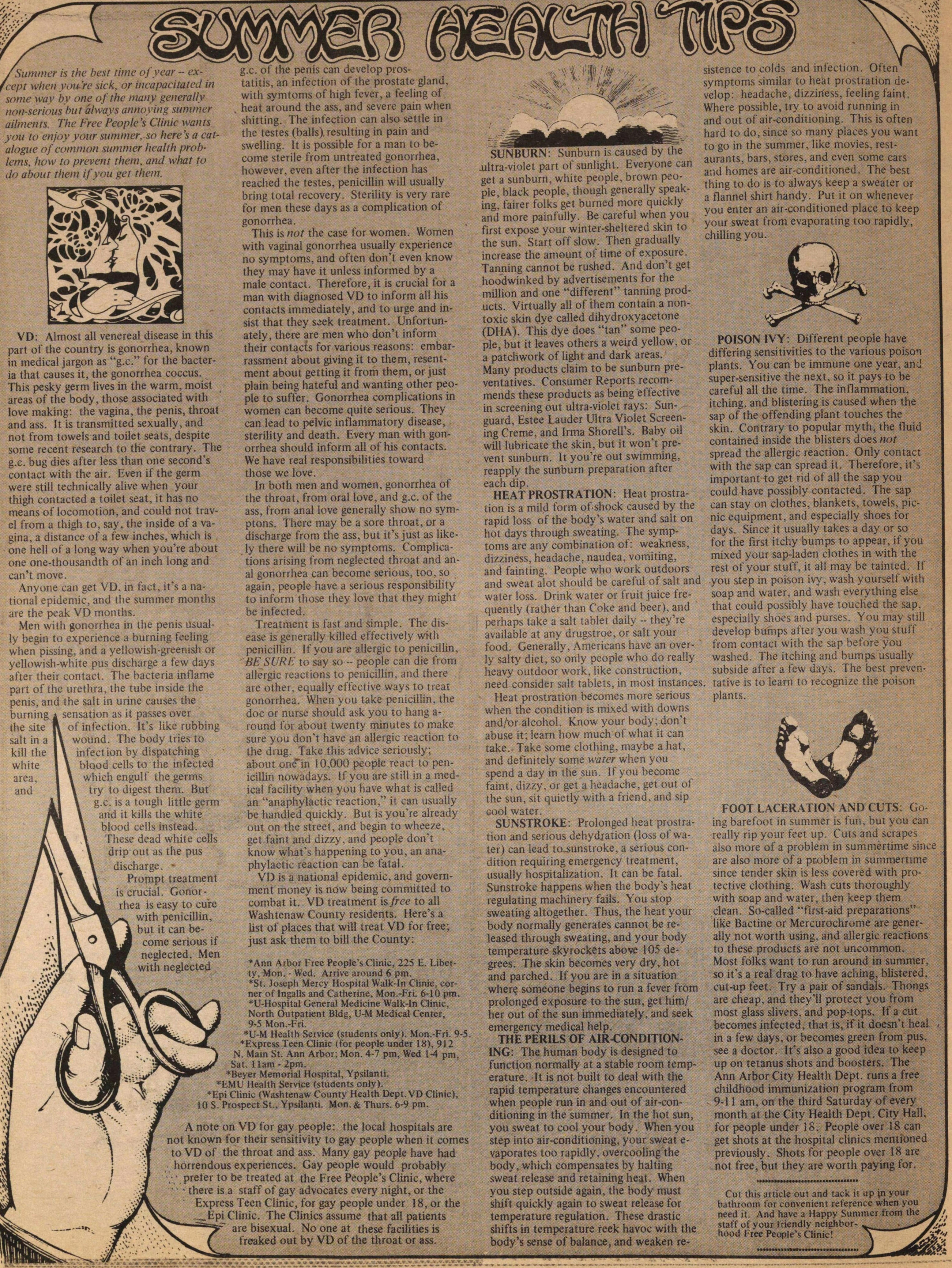 Summer is the best time of year -- except when you're sick, or incapacitated in some way by one of the many generally non-serious but always annoying summer ailments. The Free People's Clinic wants you to enjoy your summer, so here's a catalog of common summer health problems, how to prevent them, and what to do about them if you get them.

VD: Almost all venereal disease in this part of the country is gonorrhea, known in medical jargon as "g.c." for the bacteria that causes it, the gonorrhea coccus. This pesky germ lives in the warm, moist areas of the body, those associated with love making: the vagina, the penis, throat and ass. It is transmitted sexually, and not from towels and toilet seats, despite some recent research to the contrary. The g.c. bug dies after less than one second's contact with the air. Even if the germ were still technically alive when your thigh contacted a toilet seat, it has no means of locomotion, and could not travel from a thigh to, say, the inside of a vagina, a distance of a few inches, which is one hell of a long way when you're about one one-thousandth of an inch long and can't move.

Anyone can get VD. in fact, it's a national epidemic, and the summer months are the peak VD months.

Men with gonorrhea in the penis usually begin to experience a burning feeling when pissing, and a yellowish-greenish or yellowish-white pus discharge a few days after their contact. The bacteria inflame part of the urethra, the tube inside the penis, and the salt in urine causes the burning sensation as it passes over the site of infection. It's like rubbing salt in a wound. The body tries to kill the infection by dispatching white blood cells to the infected area, which engulf the germs and try to digest them. But g.c. is a tough little germ and it kills the white blood cells instead. These dead white cells drip out as the pus discharge.

Prompt treatment is crucial. Gonorrhea is easy to cure with penicillin, but it can become serious if neglected. Men with neglected g.c. of the penis can develop prostatitis, an infection of the prostate gland, with symptoms of high fever, a feeling of heat around the ass, and severe pain when shitting. The infection can also settle in the testes (balls), resulting in pain and swelling. It is possible for a man to become sterile from untreated gonorrhea, however, even after the infection has reached the testes, penicillin will usually bring total recovery. Sterility is very rare for men these days as a complication of gonorrhea.

This is not the case for women. Women with vaginal gonorrhea usually experience no symptoms, and often don't even know they may have it unless informed by a male contact. Therefore, it is crucial for a man with diagnosed VD to inform all his contacts immediately, and to urge and insist that they seek treatment. Unfortunately, there are men who don't inform their contacts for various reasons: embarrassment about giving it to them, resentment about getting it from them, or just plain being hateful and wanting other people to suffer. Gonorrhea complications in women can become quite serious. They can lead to pelvic inflammatory disease, sterility and death. Every man with gonorrhea should inform all of his contacts. We have real responsibilities toward those we love.

Treatment is fast and simple. The disease is generally killed effectively with penicillin. If you are allergic to penicillin, BE SURE to say so -- people can die from allergic reactions to penicillin, and there are other, equally effective ways to treat gonorrhea. When you take penicillin, the doc or nurse should ask you to hang around for about twenty minutes to make sure you don't have an allergic reaction to the drug. Take this advice seriously; about one in 10,000 people react to penicillin nowadays. If you are still in a medical facility when you have what is called an "anaphylactic reaction," it can usually be handled quickly. But if you're already out on the street, and begin to wheeze, get faint and dizzy, and people don't know what's happening to you, an anaphylactic reaction can be fatal.

VD is a national epidemic, and government money is now being committed to combat it. VD treatment is free to all Washtenaw County residents. Here's a list of places that will treat VD for free; just ask them to bill the County:

A note on VD for gay people: the local hospitals are not known for their sensitivity to gay people when it comes to VD of the throat and ass. Many gay people have had horrendous experiences. Gay people would probably prefer to be treated at the Free People's Clinic, where there is a staff of gay advocates every night, or the Express Teen Clinic, for gay people under 18, or the Epi Clinic. The Clinics assume that all patients are bisexual. No one at these facilities is freaked out by VD of the throat or ass.

SUNBURN: Sunburn is caused by the ultra-violet part of sunlight. Everyone can get a sunburn, white people, brown people, black people, though generally speaking, fairer folks get burned more quickly and more painfully. Be careful when you first expose your winter-sheltered skin to the sun. Start off slow. Then gradually increase the amount of time of exposure. Tanning cannot be rushed. And don't get hoodwinked by advertisements for the million and one "different" tanning products. Virtually all of them contain a nontoxic skin dye called dihydroxyacetone (DHA). This dye does "tan" some people, but it leaves others a weird yellow, or a patchwork of light and dark areas. Many products claim to be sunburn preventatives. Consumer Reports recommends these products as being effective in screening out ultra-violet rays: Sunguard, Estee Lauder Ultra Violet Screening Creme, and Irma Shorell's. Baby oil will lubricate the skin, but it won't prevent sunburn. If you're out swimming, reapply the sunburn preparation after each dip.

HEAT PROSTRATION: Heat prostration is a mild form of shock caused by the rapid loss of the body's water and salt on hot days through sweating. The symptoms are any combination of: weakness, dizziness, headache, nausea, vomiting, and fainting. People who work outdoors and sweat a lot should be careful of salt and water loss. Drink water or fruit juice frequently (rather than Coke and beer), and perhaps take a salt tablet daily - they're available at any drugstore, or salt your food. Generally, Americans have an overly salty diet, so only people who do really heavy outdoor work, like construction, need consider salt tablets, in most instances.

Heat prostration becomes more serious when the condition is mixed with downs and/or alcohol. Know your body; don't abuse it; learn how much of what it can take. Take some clothing, maybe a hat. and definitely some water when you spend a day in the sun. If you become faint, dizzy, or get a headache, get out of the sun, sit quietly with a friend, and sip cool water.

SUNSTROKE: Prolonged heat prostration and serious dehydration (loss of water) can lead to sunstroke, a serious condition requiring emergency treatment, usually hospitalization. It can be fatal. Sunstroke happens when the body's heat regulating machinery fails. You stop sweating altogether. Thus, the heat your body normally generates cannot be released through sweating, and your body temperature skyrockets above 105 degrees. The skin becomes very dry, hot and parched. If you are in a situation where someone begins to run a fever from prolonged exposure to the sun, get him/her out of the sun immediately, and seek emergency medical help.

THE PERILS OF AIR-CONDITIONING: The human body is designed to function normally at a stable room temperature. It is not built to deal with the rapid temperature changes encountered when people run in and out of air-conditioning in the summer. In the hot sun, you sweat to cool your body. When you step into air-conditioning, your sweat evaporates too rapidly, over-cooling the body, which compensates by halting sweat release and retaining heat. When you step outside again, the body must shift quickly again to sweat release for temperature regulation. These drastic shifts in temperature reek havoc with the body's sense of balance, and weaken resistance to colds and infection. Often symptoms similar to heat prostration develop: headache, dizziness, feeling faint. Where possible, try to avoid running in and out of air-conditioning. This is often hard to do, since so many places you want to go in the summer, like movies, restaurants, bars, stores, and even some cars and homes are air-conditioned. The best thing to do is to always keep a sweater or a flannel shirt handy. Put it on whenever you enter an air-conditioned place to keep your sweat from evaporating too rapidly, chilling you.

POISON IVY: Different people have differing sensitivities to the various poison plants. You can be immune one year, and super-sensitive the next, so it pays to be careful all the time. The inflammation, itching, and blistering is caused when the sap of the offending plant touches the skin. Contrary to popular myth, the fluid contained inside the blisters does not spread the allergic reaction. Only contact with the sap can spread it. Therefore, it's important to get rid of all the sap you could have possibly contacted. The sap can stay on clothes, blankets, towels, picnic equipment, and especially shoes for days. Since it usually takes a day or so for the first itchy bumps to appear, if you mixed your sap-laden clothes in with the rest of your stuff, it all may be tainted. If you step in poison ivy, wash yourself with soap and water, and wash everything else that could possibly have touched the sap, especially shoes and purses. You may still develop bumps after you wash your stuff from contact with the sap before you washed. The itching and bumps usually subside after a few days. The best preventative is to learn to recognize the poison plants.

FOOT LACERATION AND CUTS: Going barefoot in summer is fun, but you can really rip your feet up. Cuts and scrapes are also more of a problem in summertime since tender skin is less covered with protective clothing. Wash cuts thoroughly with soap and water, then keep them clean. So-cal!ed "first-aid preparations" like Bactine or Mercurochrome are generally not worth using, and allergic reactions to these products are not uncommon. Most folks want to run around in summer, so it's a real drag to have aching, blistered. cut-up feet. Try a pair of sandals. Thongs are cheap, and they'll protect you from most glass slivers, and pop-tops. If a cut becomes infected, that is, if it doesn't heal in a few days, or becomes green from pus, see a doctor. It's also a good idea to keep up on tetanus shots and boosters. The Ann Arbor City Health Dept. runs a free childhood immunization program from 9-11 am, on the third Saturday of every month at the City Health Dept. City Hall for people under 18. People over 18 can get shots at the hospital clinics mentioned previously. Shots for people over 18 are not free, but they are worth paying for.

Cut this article out and tack it up in your bathroom for convenient reference when you need it. And have a Happy Summer from the staff of your friendly neighborhood Free People's Clinic!