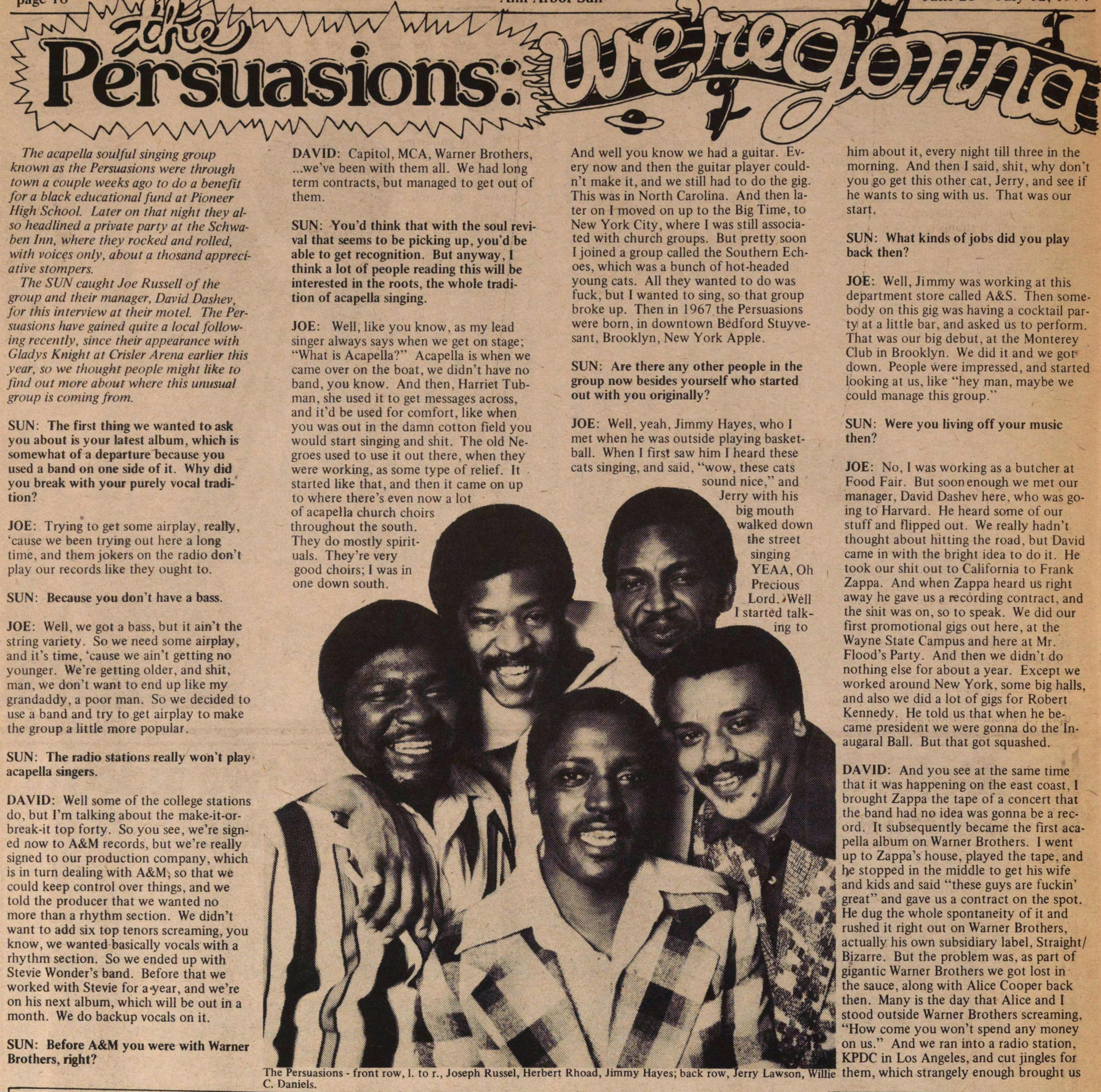 The acapella soulful singing group known as the Persuasions were through town a couple weeks ago to do a benefit for a black educational fund at Pioneer High School. Later on that night they also headlined a private party at the Schwaben Inn, where they rocked and rolled, with voices only, about a thousand appreciative stompers.

The SUN caught Joe Russell of the group and their manager, David Dashev, for this interview at their motel. The Persuasions have gained quite a local following recently, since their appearance with Gladys Knight at Crisler Arena earlier this year, so we thought people might like to find out more about where this unusual group is coming from.

SUN : The first thing we wanted to ask you about is your latest album, which is somewhat of a departure because you used a band on one side of it. Why did you break with your purely vocal tradition?

JOE: Trying to get some airplay, really, 'cause we been trying out here a long time, and them jokers on the radio don't play our records like they ought to.

SUN: Because you don't have a bass.

JOE: Well, we got a bass, but it ain't the string variety. So we need some airplay, and it's time, 'cause we ain't getting no younger. We're getting older, and shit, man, we don't want to end up like my granddaddy, a poor man. So we decided to use a band and try to get airplay to make the group a little more popular.

DAVID: Well some of the college stations do, but I'm talking about the make-it-or-break-it top forty. So you see, we're signed now to A&M records, but we're really signed to our production company, which is in turn dealing with A&M, so that we could keep control over things, and we told the producer that we wanted no more than a rhythm section. We didn't want to add six top tenors screaming, you know, we wanted basically vocals with a rhythm section. So we ended up with Stevie Wonder's band. Before that we worked with Stevie for a year, and we're on his next album, which will be out in a month. We do backup vocals on it.

SUN: Before A&M you were with Warner Brothers, right?

DAVID: Capitol, MCA, Warner Brothers, ...we've been with them all. We had long term contracts, but managed to get out of them.

SUN: You'd think that with the soul revival that seems to be picking up, you'd be able to get recognition. But anyway, I think a lot of people reading this will be interested in the roots, the whole tradition of acapella singing.

JOE: Well, like you know, as my lead singer always says when we get on stage; "What is Acapella?" Acapella is when we came over on the boat, we didn't have no band, you know. And then, Harriet Tubman, she used it to get messages across, and it'd be used for comfort, like when you was out in the damn cotton field you would start singing and shit. The old Negroes used to use it out there, when they were working, as some type of relief. It started like that, and then it came on up to where there's even now a lot of acapella church choirs throughout the south. They do mostly spirituals. They're very good choirs; I was in one down south. And well you know we had a guitar. Every now and then the guitar player couldn't make it, and we still had to do the gig. This was in North Carolina. And then later on I moved on up to the Big Time, to New York City, where I was still associated with church groups. But pretty soon I joined a group called the Southern Echoes, which was a bunch of hot-headed young cats. All they wanted to do was fuck, but I wanted to sing, so that group broke up. Then in 1967 the Persuasions were born, in downtown Bedford Stuyvesant, Brooklyn, New York Apple.

SUN: Are there any other people in the group now besides yourself who started out with you originally?

JOE: Well, yeah, Jimmy Hayes, who I met when he was outside playing basketball. When I first saw him I heard these cats singing, and said, "wow, these cats sound nice," and Jerry with his big mouth walked down the street singing YEAA,Oh Precious Lord. Well I started talking to him about it, every night till three in the morning. And then I said, shit, why don't you go get this other cat, Jerry, and see if he wants to sing with us. That was our start.

SUN: What kinds of jobs did you play back then?

JOE: Well, Jimmy was working at this department store called A&S. Then somebody on this gig was having a cocktail party at a little bar, and asked us to perform. That was our big debut, at the Monterey Club in Brooklyn. We did it and we got down. People were impressed, and started looking at us, like "hey man, maybe we could manage this group."

SUN: Were you living off your music then?

JOE: No, I was working as a butcher at Food Fair. But soon enough we met our manager, David Dashev here, who was going to Harvard. He heard some of our stuff and flipped out. We really hadn't thought about hitting the road, but David came in with the bright idea to do it. He took our shit out to California to Frank Zappa. And when Zappa heard us right away he gave us a recording contract, and the shit was on, so to speak. We did our first promotional gigs out here, at the Wayne State Campus and here at Mr. Flood's Party. And then we didn't do nothing else for about a year. Except we worked around New York, some big halls, and also we did a lot of gigs for Robert Kennedy. He told us that when he became president we were gonna do the Inaugural Ball. But that got squashed.

DAVID: And you see at the same time that it was happening on the east coast, I brought Zappa the tape of a concert that the band had no idea was gonna be a record. It subsequently became the first acapella album on Warner Brothers. I went up to Zappa's house, played the tape, and he stopped in the middle to get his wife and kids and said "these guys are fuckin' great" and gave us a contract on the spot. He dug the whole spontaneity of it and rushed it right out on Warner Brothers, actually his own subsidiary label, Straight/Bizarre. But the problem was, as part of gigantic Warner Brothers we got lost in the sauce, along with Alice Cooper back then. Many is the day that Alice and I stood outside Warner Brothers screaming, "How come you won't spend any money on us." And we ran into a radio station, KPDC in Los Angeles, and cut jingles for them, which strangely enough brought us