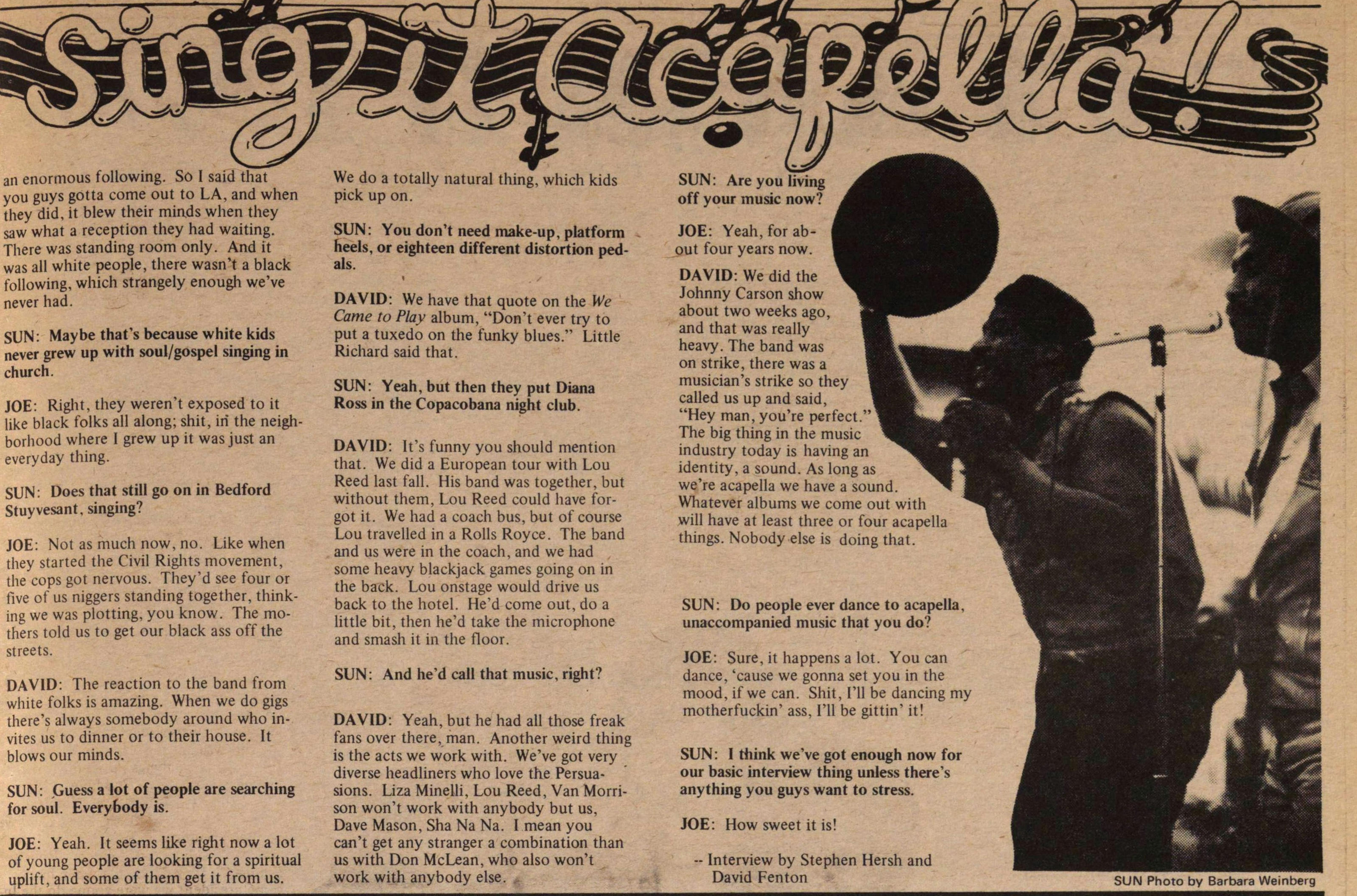 an enormous following. So I said that you guys gotta come out to LA, and when they did, it blew their minds when they saw what a reception they had waiting. There was standing room only. And it was all white people, there wasn't a black following, which strangely enough we've never had.

JOE: Right, they weren't exposed to it like black folks all along; shit, in the neighborhood where I grew up it was just an everyday thing.

SUN: Does that still go on in Bedford Stuyvesant, singing?

JOE: Not as much now, no. Like when they started the Civil Rights movement, the cops got nervous. They'd see four or five of us niggers standing together, thinking we was plotting, you know. The mothers told us to get our black ass off the streets.

DAVID: The reaction to the band from white folks is amazing. When we do gigs there's always somebody around who invites us to dinner or to their house. It blows our minds.

SUN: Guess a lot of people are searching for soul. Everybody is.

JOE: Yeah. It seems like right now a lot of young people are looking for a spiritual uplift, and some of them get it from us. We do a totally natural thing, which kids pick up on.

DAVID: We have that quote on the We Came to Play album, "Don't ever try to put a tuxedo on the funky blues." Little Richard said that.

SUN: Yeah, but then they put Diana Ross in the Copacabana night club.

DAVID: It's funny you should mention that. We did a European tour with Lou Reed last fall. His band was together, but without them, Lou Reed could have forgot it. We had a coach bus, but of course Lou traveled in a Rolls Royce. The band and us were in the coach, and we had some heavy blackjack games going on in the back. Lou onstage would drive us back to the hotel. He'd come out, do a little bit, then he'd take the microphone and smash it in the floor.

DAVID: Yeah, but he had all those freak fans over there, man. Another weird thing is the acts we work with. We've got very diverse headliners who love the Persuasions. Liza Minelli, Lou Reed, Van Morrison won't work with anybody but us, Dave Mason, Sha Na Na. I mean you can't get any stranger a combination than us with Don McLean, who also won't work with anybody else.

SUN: Are you living off your music now?

DAVID: We did the Johnny Carson show about two weeks ago, and that was really heavy. The band was on strike, there was a musician's strike so they called us up and said, "Hey man, you're perfect." The big thing in the music industry today is having an identity, a sound. As long as we re acapella we have a sound. Whatever albums we come out with will have at least three or four acapella things. Nobody else is doing that.

SUN: Do people ever dance to acapella, unaccompanied music that you do?

JOE: Sure, it happens a lot. You can dance, 'cause we gonna set you in the mood, if we can. Shit, I'll be dancing my mother fuckin' ass, I'll be gittin' it!

SUN: I think we've got enough now for our basic interview thing unless there's anything you guys want to stress.

JOE: How sweet it is!