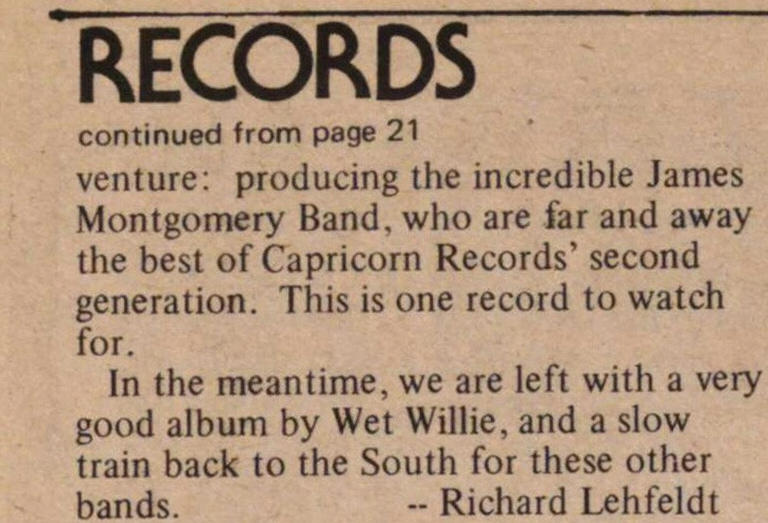 Two of these bands have written tunes about Alabama. Georgia is mentioned. The country life is the good life. The thing to do is "keep on smilin' through the rain/laughin' at the pain/flowin' with the changes/'till the sun comes out again." To what extent can we call this representative Southern music? Not at all. These are all rock and roll bands operating out of the South. Wet Willie pays homage to aspects of the Southern musical heritage, Marshall Tucker pays homage only to the Allman Brothers, and Lynyrd Skynyrd (produced by the legendary Southern Baptist minister Al Kooper) could just as easily be a Detroit band.

The theory behind the creation of the "Southern Sound" is conceptually similar to that of the "British Invasion", where the public is coaxed to endorse not just a band, but an entire context out of which that music supposedly comes. This encourages sales, the buyer ideally getting interested in the entire "British sound". With the three bands here, as with most of the British bands of the Sixties, one can find few musical similarities. What lumps them together is the lip service they pay to some vague, fantasied South. They have as much country authenticity as The Eagles, who operate out of the vast prairie-lands of Los Angeles.

The weakest of these bands, Marshall Tucker, is currently the most successful, with this particular album riding high in the charts. The songwriting (all the tunes are written by guitarist Toy Caldwell) is painfully weak. The lyrics are trite, and the record is overpopulated with endless, uninteresting improvisation by second-rate soloists (particularly the sax-player, who sounds very out of place). The rhythm section is mediocre when it lays back; in the clutch, they are unreliable. The sound of the band is middle-of-the-road country rock, a kind of limp Allman Bros. Band with Grateful Dead overtones. An experience approximating sleep.

Lynyrd Skynyrd is a Straight-ahead rock and roll band, not very original but highly competent. They sound as if they have been playing together for a long time. The band boasts three screaming guitars recorded a la Neil Young, a vocalist who sounds very California, a nearly inaudible piano player (usually the case with guitar-oriented bands), and a solid but unadventurous rhythm section. Al Kooper has produced the group intelligently, but Lynyrd Skynyrd is still indistinguishable from a few hundred other bands in the arena.

Wet Willie is the best group of this batch. The band sound is almost always tight (with the exception of their funkier tunes, where they seem, if not looser at least a little bit hesitant), demonstrating both roots and a creative direction. The songwriting is split between country-style tunes and funky rock. The funky tunes are more energetically executed; "Soul Sister" and "Soul Jones" are also very well-conceived songs whose only flaws are some lapses in the rhythmic precision. The lead vocalist, Jimmy Hall, plays some excellent alto sax; and the bass player is outstanding. Wet Willie is at its lowest on a string of tunes about that good old country life, complete with religion and organic flow. The execution of these lackluster country-folk tunes is unconvincing. Still and all, this is the most promising band of the three. Veteran producer Tom Dowd, on loan from Atlantic Records, has done an excellent job. One looks forward to the results of his current venture: producing the incredible James Montgomery Band, who are far and away the best of Capricorn Records' second generation. This is one record to watch for.

In the meantime, we are left with a very good album by Wet Willie, and a slow train back to the South for these other bands.  --Richard Lehfeldt