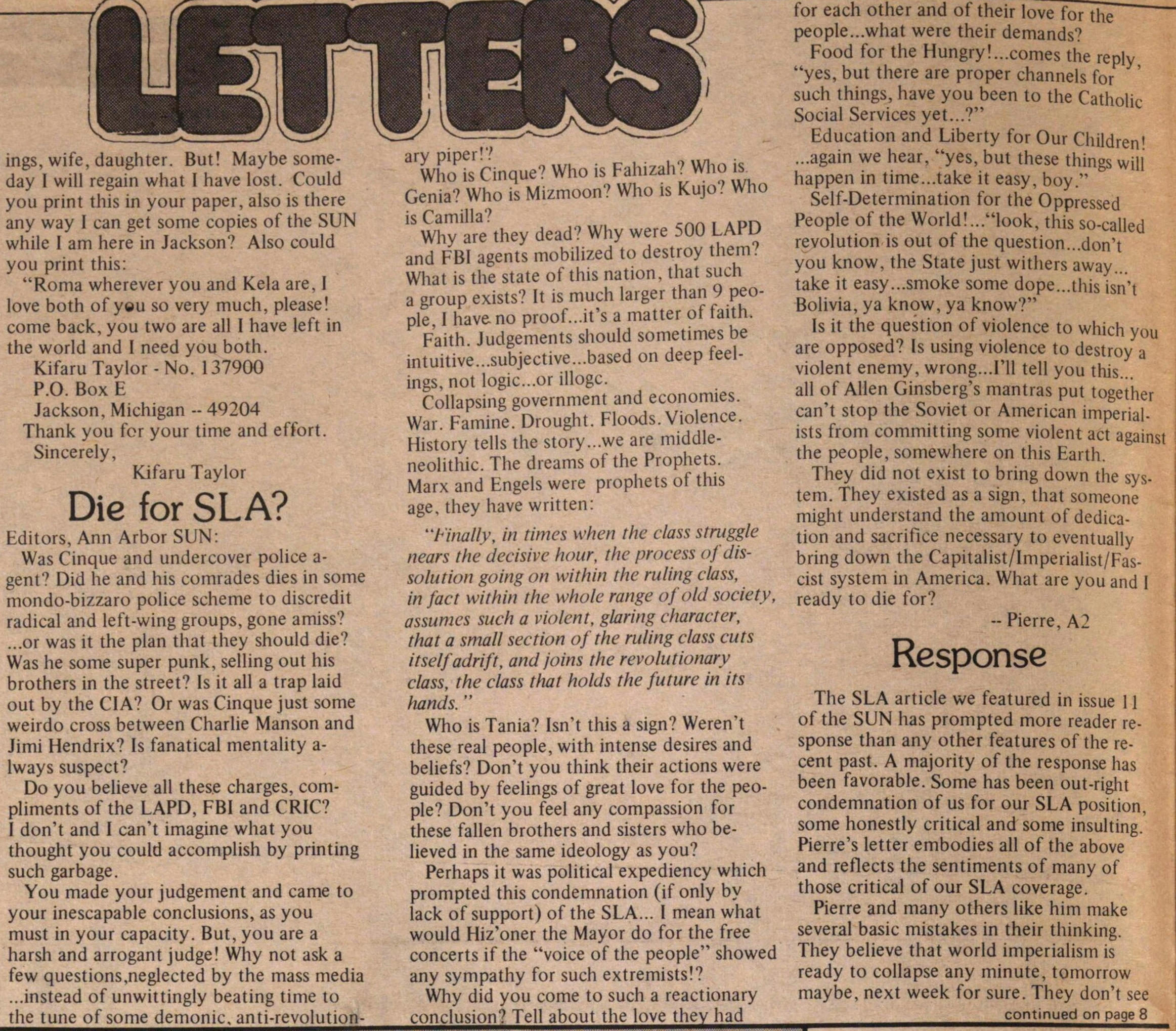 Editors, Ann Arbor SUN: Was Cinque and undercover pólice agent? Did he and his comrades dies in some mondo-bizzaro pólice scheme to discredit radical and left-wing groups, gone amiss? ...or was it the plan that they should die? Was he some super punk, selling out his brothers in the street? Is it all a trap laid out by the CIA? Or was Cinque just some weirdo cross between Charlie Manson and Jimi Hendrix? Is fanatical mentality always suspect? Do you believe all these charges, compliments of the LAPD, FBI and CRIC? I don't and I can't imagine what you thought you could accomplish by printing such garbage. You made your judgement and carne to your inescapable conclusions, as you must in your capacity. But, you are a harsh and arrogant judge! Why not ask a few questions.neglected by the mass media ...instead of unwittingly beating time tg the tune of some demonic. "'wEcinque? Who is Fahizah? Who is Cenia? Who is Mizmoon? Who is Kujo? Who ISWhy"are they dead? Why were 500 LAPD and FBI agents mobilized to destroy them í What is the state of this nation. ihat such a group exists? It is much larger than 9 people, 1 have-no proof...it's a matter of faith. Faith. Judgements should sometimes be intuitive...subjective...based on deep feelings, not logic.or illogc. Collapsing government and economies. War. Famine. Drought. Floods. Violence. History tells the story. ..we are middleneolithic. The dreams of the Prophets. Marx and Engels were prophets of this age, they have written: "Hnally, in times when the class struggle nears the decisive hour, the process of dissolution going on within the ruling class, in fact within the whole range ofold society, assunics such a violent, glaring diameter, that a small section of the ruling class cuts itselfadrift, and joins the revolutionary class, the class tliat holds the future in its hands. " Who is Tania? Isn't this a sign? Weren't these real people, with intense desires and beliefs? Don't you think their actions were guided by feelings of great love for the people? Don't you feel any compassion for these fallen brothers and sisters who believed in the same ideology as you? Perhaps it was political expediency which prompted this condemnation (if only by lack of support) of the SLA... I mean what would Hiz'oner the Mayor do for the free concerts if the "voice of the people" showed any sympathy for such extremists!? Why did you come to such a reactionary conclusión? Teil about the love they had for each other and of their love for the " people. ..what were their demands? Food for the Hungry!... comes the reply "yes, but there are proper channels for ' such things, have you been to the Catholic Social Services yet...?" Education and Liberty for Our Children! ...again we hear, "yes, but these things will happen in time...take it easy, boy." Self-Determination for the Oppressed People of the World!... "look, this so-called revolution is out of the question...don't you know, the State just withers away.. take it easy...smoke some dope. ..this isn't Bolivia, ya know, ya know?" Is it the question of violence to which you are opposed? Is using violence to destroy a violent enemy, wrong.. .I'll teil you this... all of Allen Ginsberg's mantras put together can't stop the Soviet or American imperialists from committing some violent act against the people, somewhere on this Earth. They did not exist to bring down the system. They existed as a sign, that someone might understand the amount of dedication and sacrifice necessary to eventually bring down the CapitalistImperialistFascist system in America. What are you and I ready to die for?