All 'u' Groups Facing Financial Control 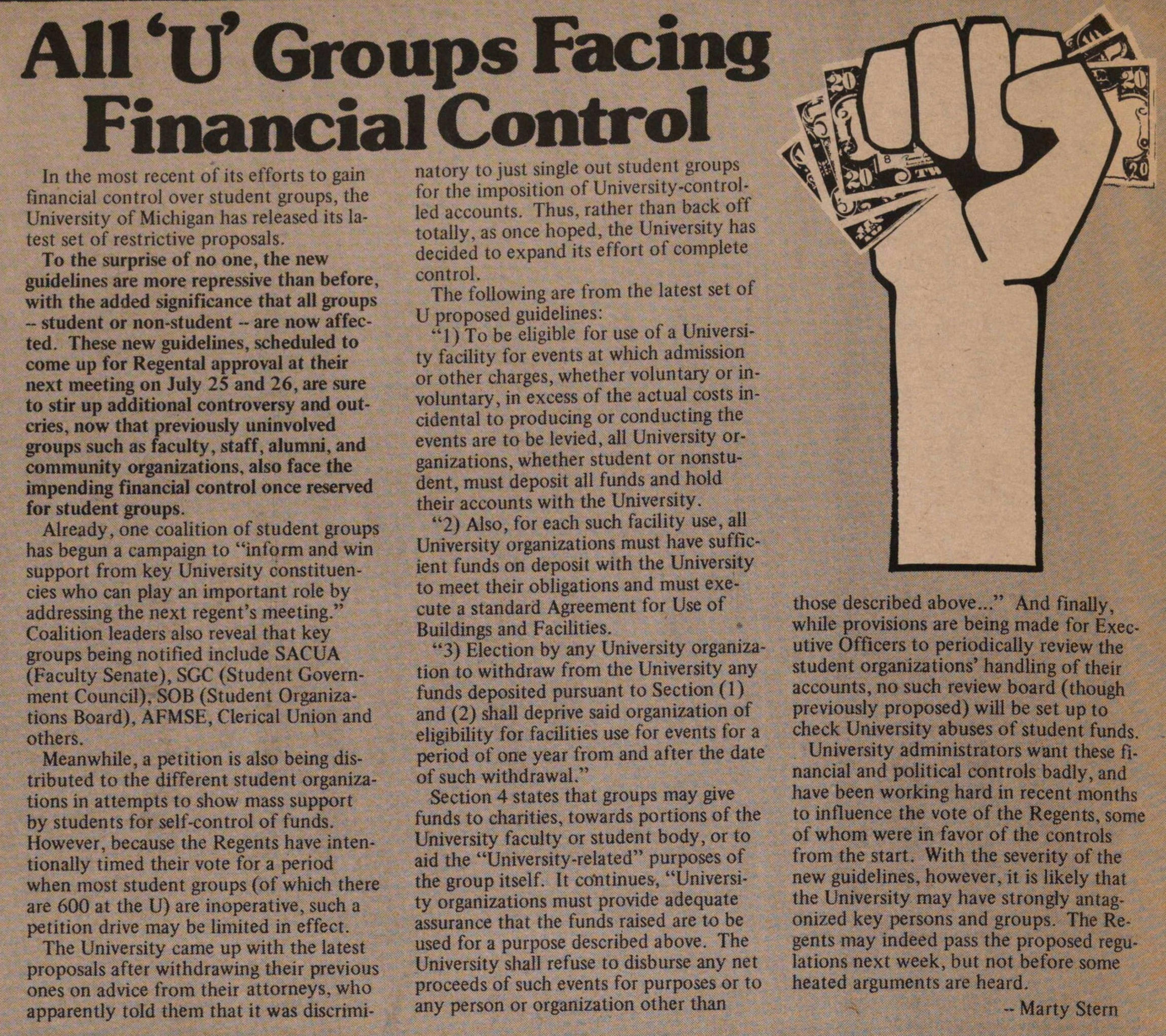 In the most recent of its efforts to gain financial control over student groups, the University of Michigan has released its latest set of restrictive proposals. To the surprise of no one, the new guidelines are more repressive than before, with the added significance that all groups - student or non-student - are now affected. These new guidelines, scheduled to come up for Regenta! approval at their next meeting on July 25 and 26, are sure to stir up additional controversy and outcries, now that previously uninvolved groups such as faculty, staff, alumni, and community organizations, also face the impending financia] control once reserved for student groups. Already, one coalition of student groups has begun a campaign to "infqrm and win support from key University constituencies who can play an important role by addressing the next regent's meeting." Coalition leaders also reveal that key groups being notified include SACUA (Faculty Senate), SGC (Student Government Councii), SOB (Student Oganizations Board), AFMSE, Clerical Union and others. Meanwhile, a petition is also being distributed to the different student organizations in attempts to show mass support by students for self-control of funds. However, because the Regents have intentionally timed their vote for a period when most student groups (of which there are 600 at the U) are inoperative, such a petition drive may be limited in effect. The University carne up with the la test proposals after withdrawing their previous ones on advice from their attorneys, who apparently told them that it was natory to just single out student groups for the imposition of University-controlled accounts. Thus, rather than back off totaily. as once hoped, the University has decided to expand its effort of complete control. The following are from the latest set of U proposed guidelines: "!) To be eligible for use of a University facility for events at which admission or other charges, whether voluntary or involuntary, in excess of the actual costs incidental to producing or conducting the events are to be levied, all University organizations, whether student or nonstudent, must deposit all funds and hold their accounts with the University. "2) Also, for each such facility use, all University organizations must have sufficient funds on deposit with the University to meet their obligations and must execute a standard Agreement for Use of Buildings and Facilities. "3) Election by any University organization to withdraw from the University any funds deposited pursuant to Section (1) and (2) shall deprive said organization of eligibility for facilities use for events for a period of one year from and after the date of such withdrawal." Section 4 states that groups may give funds to charities, towards portions of the University faculty or student body, or to aid the "University-related" purposes of the group itself. It continúes, "University organizations must provide adequate assurance that the funds raised are to be used for a purpose described above. The University shall refuse to disburse any net proceeds of such events for purposes or to any person or organization other than those described above..." And finally, while provisíons are being made for Executive Officers to periodically review the student organizations' handling of their accounts, no such review board (though previously proposed) will be set up to check University abuses of student funds. University administrators want these financial and politica! controls badly, and have been working hard in recent months to influence the vote of the Regents, some of whom were in favor of the controls f rom the start. With the severity of the new guidelines, however, it is likely that the University may have strongiy antagonized key persons and groups. The Regents may indeed pass the proposed regulations next week, but not before some heated arguments are heard.