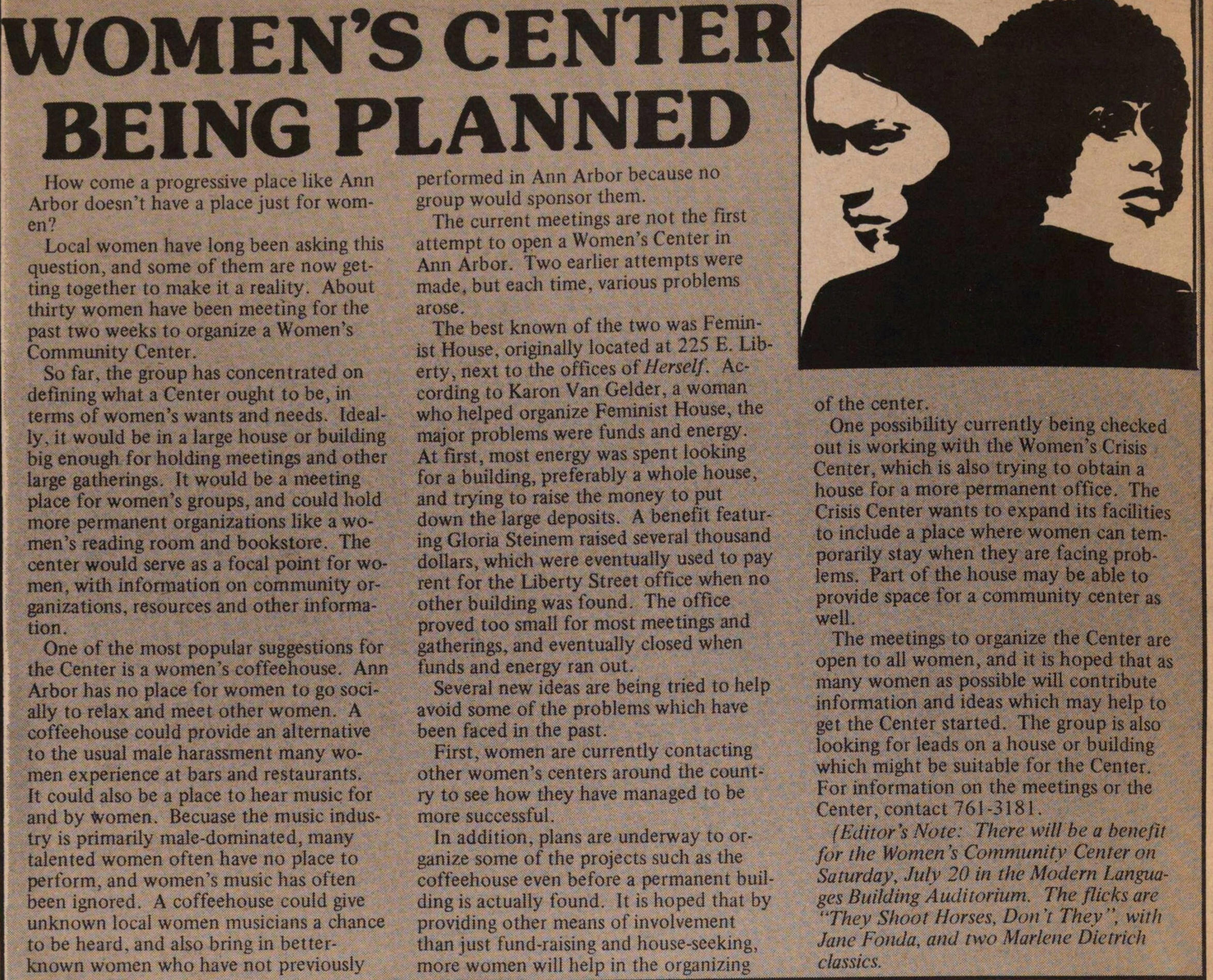 How come a progressive place like Ann Arbor doesn't have a place just for women? Local women have long been asking this question, and some of them are now getting together to make it a reality. About thirty women have been meeting for the past two weeks to organize a Women 's Community Center. So far, the group has concentrated on defining what a Center ought to be, in terms of women's wants and needs. Ideally, it would be in a large house or building big enough for holding meetings and other large gatherings. It would be a meeting place for wornen's groups, and could hold more permanent organizations like a women's reading room and bookstore. The center would serve as a focal point for women, with inforrnation on community organizations, resources and other information. One of the most popular suggestions for the Center is a women's coffeehouse. Ann Arbor has no place for women to go socially to relax and meet other women. A coffeehouse could provide an alternative to the usual male harassment many women experience at bars and restaurants. it could also be a place to hear music for and by women. Becuase the music industry is primarily inale-dominated, many talented women often have no place to perform, and women's music has often been ignored. A coffeehouse could give unknown local women musicians a chance to be heard, and also bring in betterknown women who have not previously performed in Ann Arbor because no group would sponsor them. The current meetings are not the first attempt to open a Women's Center in Ann Arbor. Two earlier attempts were made, but each time, various problems arose. The best known of the two was Feminist House, originally located at 225 E. Liberty, next to the offices of Herself. According to Karon Van Gelder, a woman who helped organize Feminist House, the major probiems were funds and energy. At first, most energy was spent iooking for a building, preferably a whole house, and trying to raise the money to put down the large deposits. A benefit featuring Gloria Steinem raised several thousand dollars, which were eventually used to pay rent for the Liberty Street office when no other building was found. The office proved too small for most meetings and gatherings, and eventually closed when funds and energy ran out. Several new ideas are being tried to help avoid some of the problems which have been faced in the past. First, women are currently contacting other women's centers around the country to see how they have managed to be more successful . In addition, plans are underway to organize some of the projects such as the coffeehouse even before a permanent building is actually found. lt is hoped that by providing other means of involvement than just fund-raising and house-seeking, more women will help in the organizing of the center. One possibiiity currently being checked out is working with the Women's Crisis Center, which is also trying to obtain a house for a more permanent office. The Crisis Center wants to expand its facilities to include a place where women can temporarily stay when they are facing problems. Part of the house may be able to provide space for a community center as well. The meetings to organize the Center are open to all women, and it is hoped that as many women as possible will contribute information and ideas which may help (o get the Center started. The group is also looking for leads on a house or building which might be suitable for the Center. For information on the meetings or the Center, contact 761-3181. (Editor's Note: Títere will be a benefit for the Women 's Community Center on Saturday, July 20 in the Modern Languages Building Auditorium. The flicks are "they Shoot forses, Don't They", with Jane Fonda, and two Marlene Dietrieh classics.