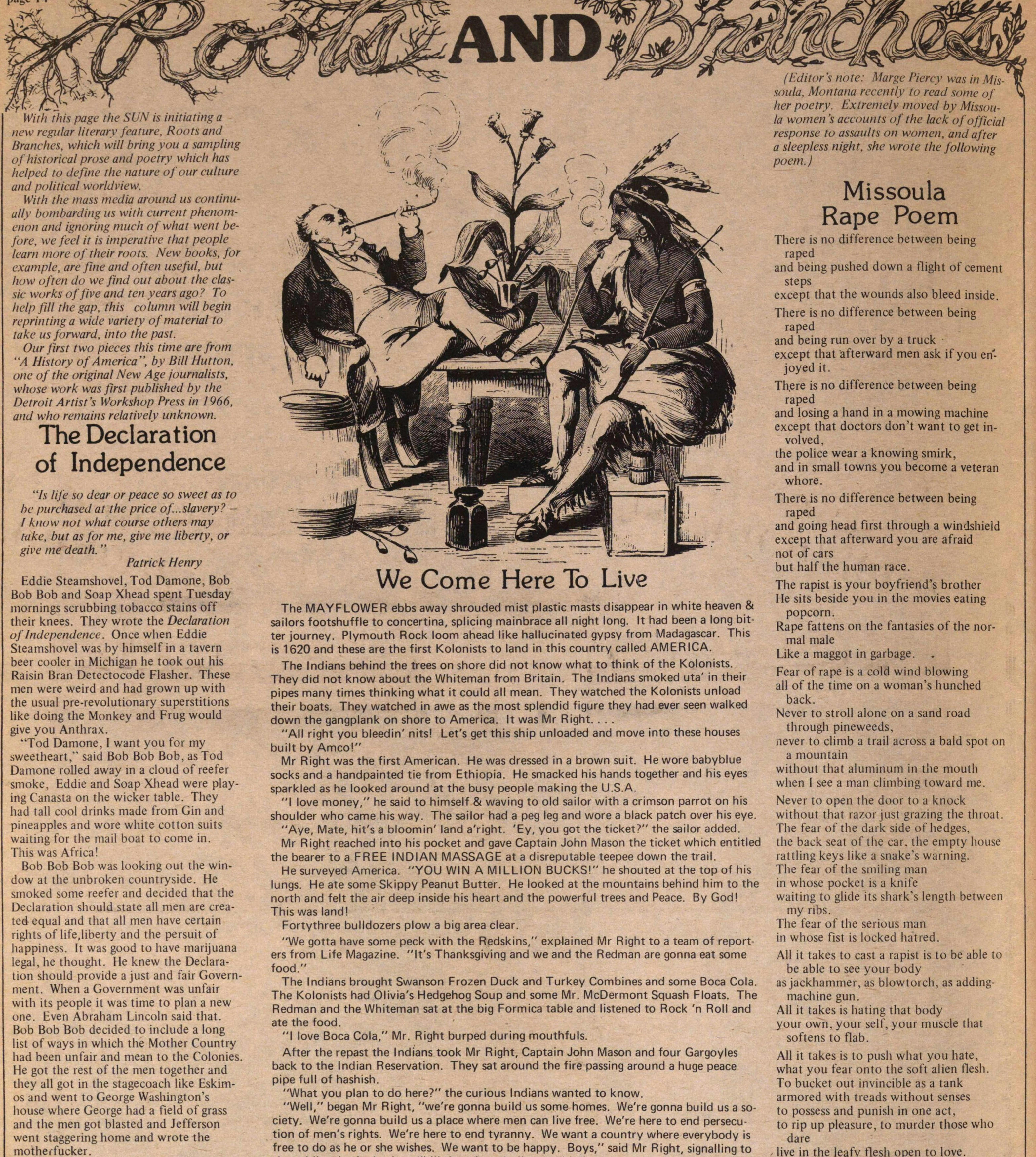 With Flus page the SUN is initiating a new regular literary feature, Roots and Branches, which will bring you a sampling of historica! prose and poetry which has helped to define the nature of our culture and politieel worldview. With the mass media around us continually bombarding us with current pheiiomenon and ignoring inuch ofwhat went befone, wefeel it is imperattve that people learn more oftheir roots. New books, for example, are fine and aften useful, but liow aften do we flnd out about the classic works offive and ten years ago? To help Jill the gap, this column will begin reprint ing a wide variety of material to take usforward, int o the past. Ourfirst two pieces this time are from "A History of America", by Bill Hutton, one of the original New Age journalists, whase work was Jirst published by the Detroit Artist 's Workshop Press in 1966, and who remains relatively unknown. The Declaration of Independence "Is lije so dear or peace so sweet as to he purchased at the price of...slavery? - I hww not what course others may tukc, but as for me, give me liberty, or giPe me üeath. " Patrick Henry Eddie Steamshove!, Tod Damone, Bob Bob Bob and Soap Xhead spent Tuesday mornings scrubbing tobáceo stains off their knees. They wrote the Declaration of Independence . Once when Eddie Steamshovel was by himself in a tavern beer cooler in Michigan he took out his Raisin Bran Detectocode Flasher. These men were weird and had grown up with the usual pre-revolutionary superstitions like doing the Monkey and Frug would give you Anthrax. "Tod Damone, I want you for my sweetheart," said Bob Bob Bob, as Tod Damone rolled away in a cloud of reefer smoke, Eddie and Soap Xhead were playing Canasta on the wicker table. They had tall cool drinks made from Gin and pineapples and wore white cotton suits waiting for the mail boat to come in. This was África! Bob Bob Bob was looking out the window at the unbroken countryside. He smoked some reefer and decided that the Declaration should state all men are createdequal and that all men have certain rights of life, liberty and the persuit of happiness. It was good to have marijuana legal, he thought. He knew the Declaration should provide a just and fair Government. When a Government was unfair with its peopie it was time to plan a new one. Even Abraham Lincoln said that. Bob Bob Bob decided to include a long list of ways in which the Mother Country had been unfair and mean to the Colonies. He got the rest of the men together and they all got in the stagecoach like Eskimos and went to George Washington's house where George had a field of grass and the men got blasted and Jefferson went staggering home and wrote the motherfucker.