We Come Here To Live 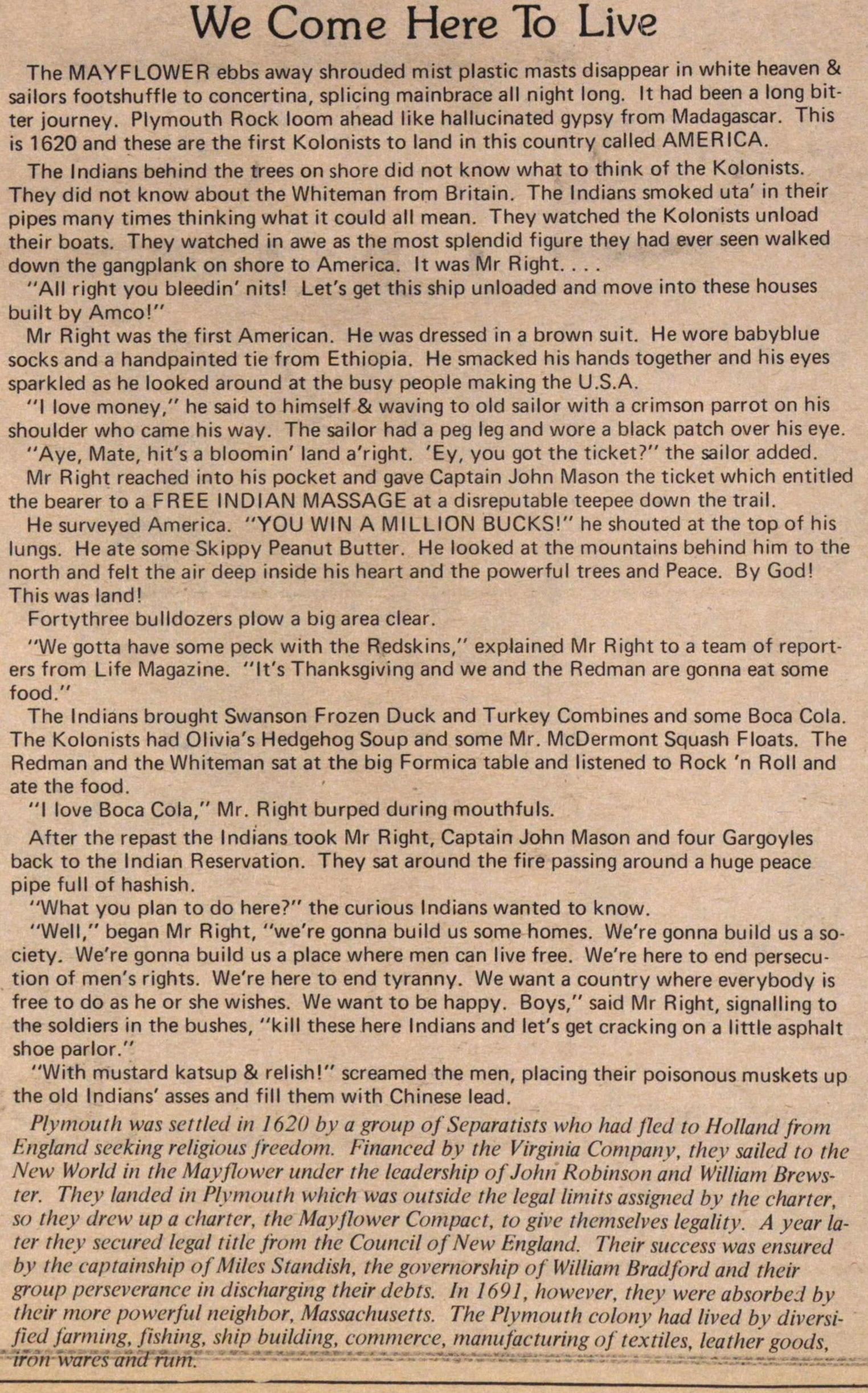 The MAYFLOWER ebbs away shrouded mist plastic masts disappear in white heaven & sailors footshuffle to concertina, splicing mainbrace all night long. It had been a long bitter journey. Plymouth Rock loom ahead like hallucinated gypsy from Madagascar. This is 1620 and these are the first Kolonists to land in this country called AMERICA. The Indians behind the trees on shore did not know what to think of the Kolonists. They did not know about the Whiteman from Britain. The Indians smoked uta' in their pipes many times thinking what t could all mean. They watched the Kolonists unload their boats. They watched in awe as the most splendid figure they had ever seen walked down the gangplank on shore to America. It was Mr Right. . . . "All right you bleedin' nits! Let's get this ship unloaded and move into these houses built by Amco!" Mr Right was the first American. He was dressed in a brown suit. He wore babyblue socks and a handpainted tie from Ethiopia. He smacked his hands together and his eyes sparkled as he looked around at the busy people making the U.S.A. "I love money," he said to himself & waving to oíd sailor with a crimson parrot on his shoulder who came his way. The sailor had a peg leg and wore a black patch over his eye. "Aye, Mate, hit's a bloomin' land a'right. 'Ey, you got the ticket?" the sailor added. Mr Right reached into his pocket and gave Captain John Mason the ticket which entitled the bearer to a FREE INDIAN MASSAGE at a disreputable teepee down the trail. He surveyed America. "YOU WIN A MILLION BUCKS!" he shouted at the top of his lungs. He ate some Skippy Peanut Butter. He looked at the mountains behind him to the north and feit the air deep inside his heart and the powerful trees and Peace. By God! This was land! Fortythree bulldozers plow a big area clear. "We gotta have some peck with the Redskins," explained Mr Right to a team of reporters from Life Magazine. "It's Thanksgiving and we and the Redman are gonna eat some food." The Indians brought Swanson Frozen Duck and Turkey Combines and some Boca Cola. The Kolonists had Olivia's Hedgehog Soup and some Mr. McDermont Squash Floats. The Redman and the Whiteman sat at the big Formica table and listened to Rock 'n Roll and ate the food. "I love Boca Cola," Mr. Right burped during mouthfuls. After the repast the Indians took Mr Right, Captain John Mason and four Gargoyles back to the Indian Reservation. They sat around the fire passing around a huge peace pipe full of hashish. "What you plan to do here?" the curious Indians wanted to know. "Well," began Mr Right, "we're gonna build us some homes. We're gonna build us a society. We're gonna build us a place where men can live free. We're here to end persecution of men's rights. We're here to end tyranny. We want a country where everybody is free to do as he or she wishes. We want to be happy. Boys," said Mr Right, signalling to the soldiers in the bushes, "kill these here Indians and let's get cracking on a little asphalt shoe parlor." "With mustard katsup & relish!" screamed the men, placing their poisonous muskets up the old Indians' asses and fill them with Chinese lead. Plymouth was set t led in 1620 by a group of 'Separatists who had flcd to Holland from Hngland seeking religious freedom. Financed by the Virginia Compon v, they sailed to the New World in the Mayflower under the leadership of John Robinson and William Brewster. They landed in Plymouth which was outside the legal limits assigned by the charter, so they iircw up a charter, the Mayflower Compact, to give themselves legality. A year later they secured legal titlc from the Council of New England. Their success was ensured by the captainship of Miles Standish. the governorship of William Bradford and their group perseverante in discharging their debts. In 1691, however, they werc absorbed bv their more powerful neighhor, Massachusetts. The Plymouth colonv had lived bv diversifiedfarming, fijhing, ship building, commerce, manufacturing of textiles, leather goods, imn wares umi mm. ■ ■ '