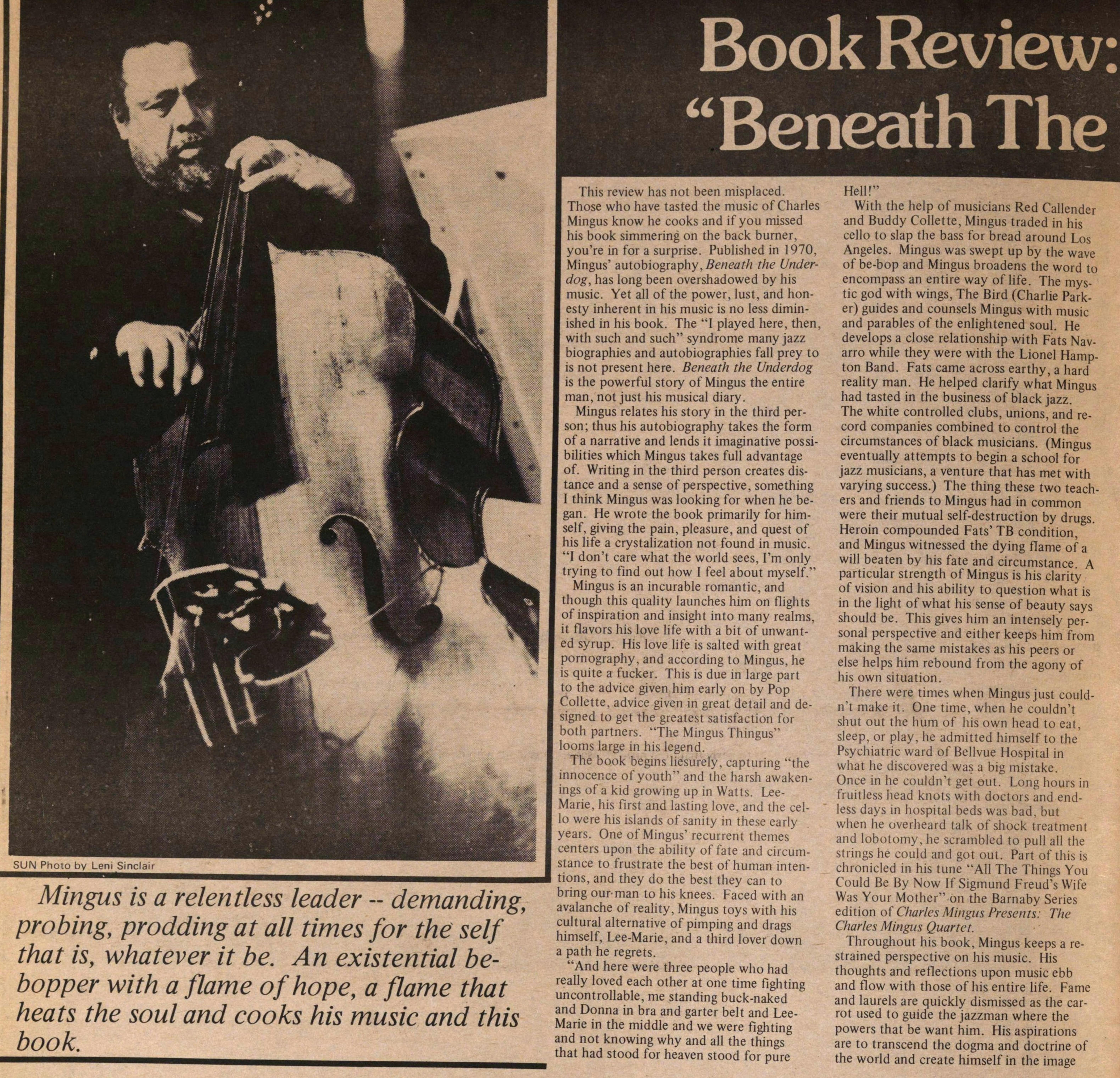 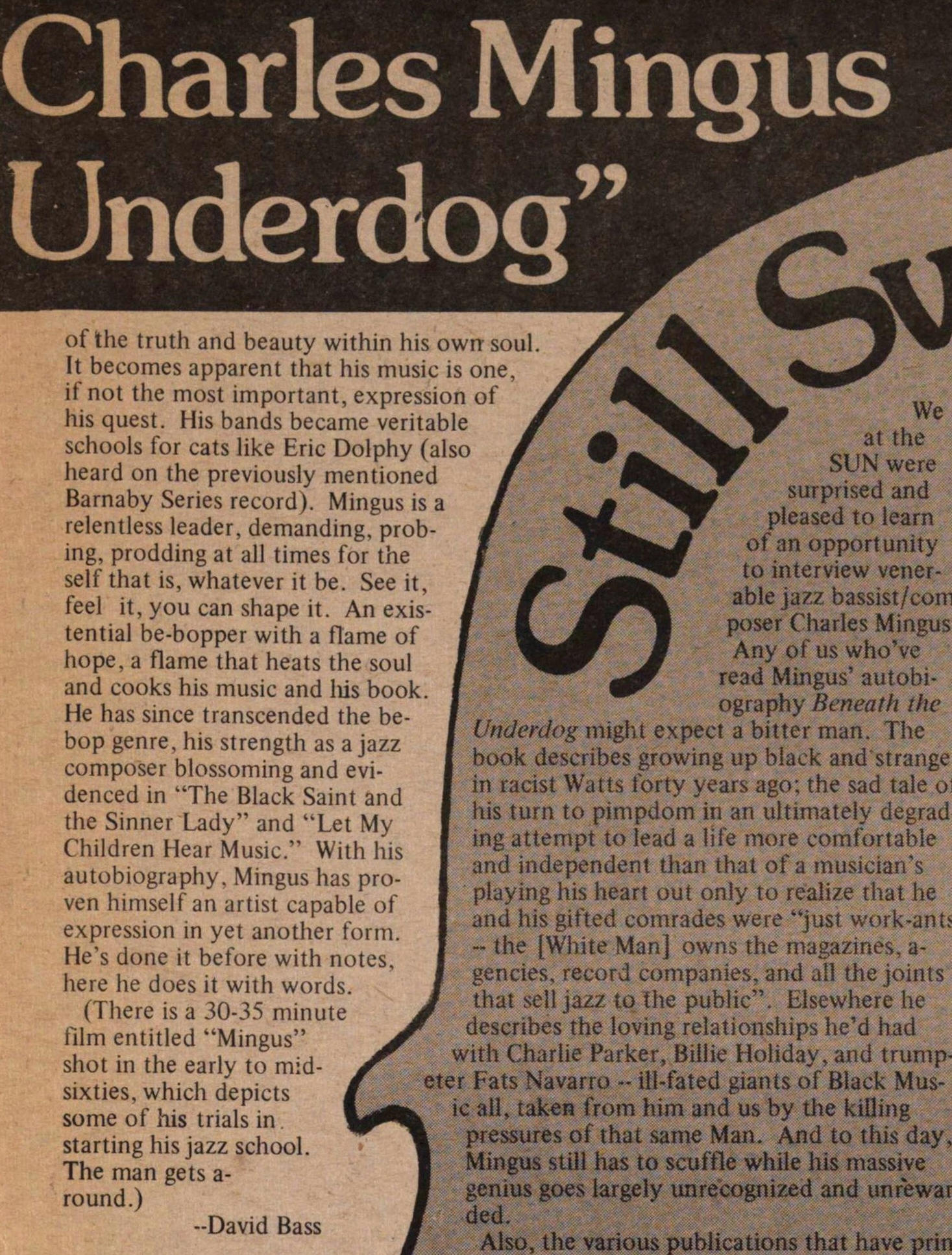 This review has not been misplaced. Those who have tasted the music of Charles Mingus know he cooks and if you missed his book simmering on the back burner, you're in for a surprise. Published in 1970, Mingus' autobiography, Beneath the Underdog, has long been overshadowed by his music. Yet all of the power, lust, and honesty inherent in his music is no less diminished in his book. The "I played here, then, with such and such" syndrome many jazz biographies and autobiographies fall prey to is not present here. Beneath the Underdog is the powerful story of Mingus the entire man, not just his musical diary.

Mingus relates his story in the third person; thus his autobiography takes the form of a narrative and lends it imaginative possibilities which Mingus takes full advantage of. Writing in the third person creates distance and a sense of perspective, something I think Mingus was looking for when he began. He wrote the book primarily for himself, giving the pain, pleasure, and quest of his life a crystalization not found in music. "I don't care what the world sees, I'm only trying to find out how I feel about myself."

Mingus is an incurable romantic, and though this quality launches him on flights of inspiration and insight into many realms, it flavors his love life with a bit of unwanted syrup. His love life is salted with great pornography, and according to Mingus, he is quite a fucker. This is due in large part to the advice given him early on by Pop Collette, advice given in great detail and designed to get the greatest satisfaction for both partners. "The Mingus Thingus" looms large in his legend.

The book begins liesurely, capturing "the innocence of youth" and the harsh awakenings of a kid growing up in Watts. Lee-Marie, his first and lasting love, and the cello were his islands of sanity in these early years. One of Mingus' recurrent themes centers upon the ability of fate and circumstance to frustrate the best of human intentions, and they do the best they can to bring our man to his knees. Faced with an avalanche of reality, Mingus toys with his cultural alternative of pimping and drags himself, Lee-Marie, and a third lover down a path he regrets.

"And here were three people who had really loved each other at one time fighting uncontrollable, me standing buck-naked and Donna in bra and garter belt and LeeMarie in the middle and we were fighting and not knowing why and all the things that had stood for heaven stood for pure Hell!"
With the help of musicians Red Callender and Buddy Collette, Mingus traded in his cello to slap the bass for bread around Los Angeles. Mingus was swept up by the wave of be-bop and Mingus broadens the word to encompass an entire way of life. The mystic god with wings, The Bird (Charlie Parker) guides and counsels Mingus with music and parables of the enlightened soul. He develops a close relationship with Fats Navarro while they were with the Lionel Hampton Band. Fats came across earthy, a hard reality man. He helped clarify what Mingus had tasted in the business of black jazz. The white controlled clubs, unions, and record companies combined to control the circumstances of black musicians. (Mingus eventually attempts to begin a school for jazz musicians, a venture that has met with varying success.) The thing these two teachers and friends to Mingus had in common were their mutual self-destruction by drugs. Heroin compounded Fats' TB condition, and Mingus witnessed the dying flame of a will beaten by his fate and circumstance. A particular strength of Mingus is his clarity of vision and his ability to question what is in the light of what his sense of beauty says should be. This gives him an intensely personal perspective and either keeps him from making the same mistakes as his peers or else helps him rebound from the agony of his own situation.

There were times when Mingus just couldn't make it. One time, when he couldn't shut out the hum of his own head to eat, sleep, or play, he admitted himself to the Psychiatric ward of Bellvue Hospital in what he discovered was a big mistake. Once in he couldn't get out. Long hours in fruitless head knots with doctors and endless days in hospital beds was bad, but when he overheard talk of shock treatment and lobotomy, he scrambled to pull all the strings he could and got out. Part of this is chronicled in his tune "All The Things You Could Be By Now If Sigmund Freud's Wife Was Your Mother" on the Barnaby Series edition of Charles Mingus Presents: The Charles Mingus Quartet.

Throughout his book, Mingus keeps a restrained perspective on his music. His thoughts and reflections upon music ebb and flow with those of his entire life. Fame and laurels are quickly dismissed as the carrot used to guide the jazzman where the powers that be want him. His aspirations are to transcend the dogma and doctrine of the world and create himself in the image Mingus of the truth and beauty within his own soul. It becomes apparent that his music is one, it not the most important, expression of his quest. His bands became veritable schools for cats like Eric Dolphy (also heard on the previously mentioned Barnaby Series record). Mingus is a relentless leader, demanding, probing, prodding at all times for the self that is, whatever it be. See it, feel it, you can shape it. An existential be-bopper with a flame of hope, a flame that heats the soul and cooks his music and hi book.  He has since transcended the be-bop genre, his strength as a jazz I composer blossoming and evidenced in "The Black Saint and I the Sinner Lady" and "Let My Children Hear Music." With his autobiography. Mingus has proven himself an artist capable of expression in yet another form. He's done it before with notes, here he does it with words.

(There is a 30-35 minute A film entitled "Mingus" shot in the early to mid-sixties, which depicts some of his trials in starting his jazz school. The man gets round.)
-- David Bass