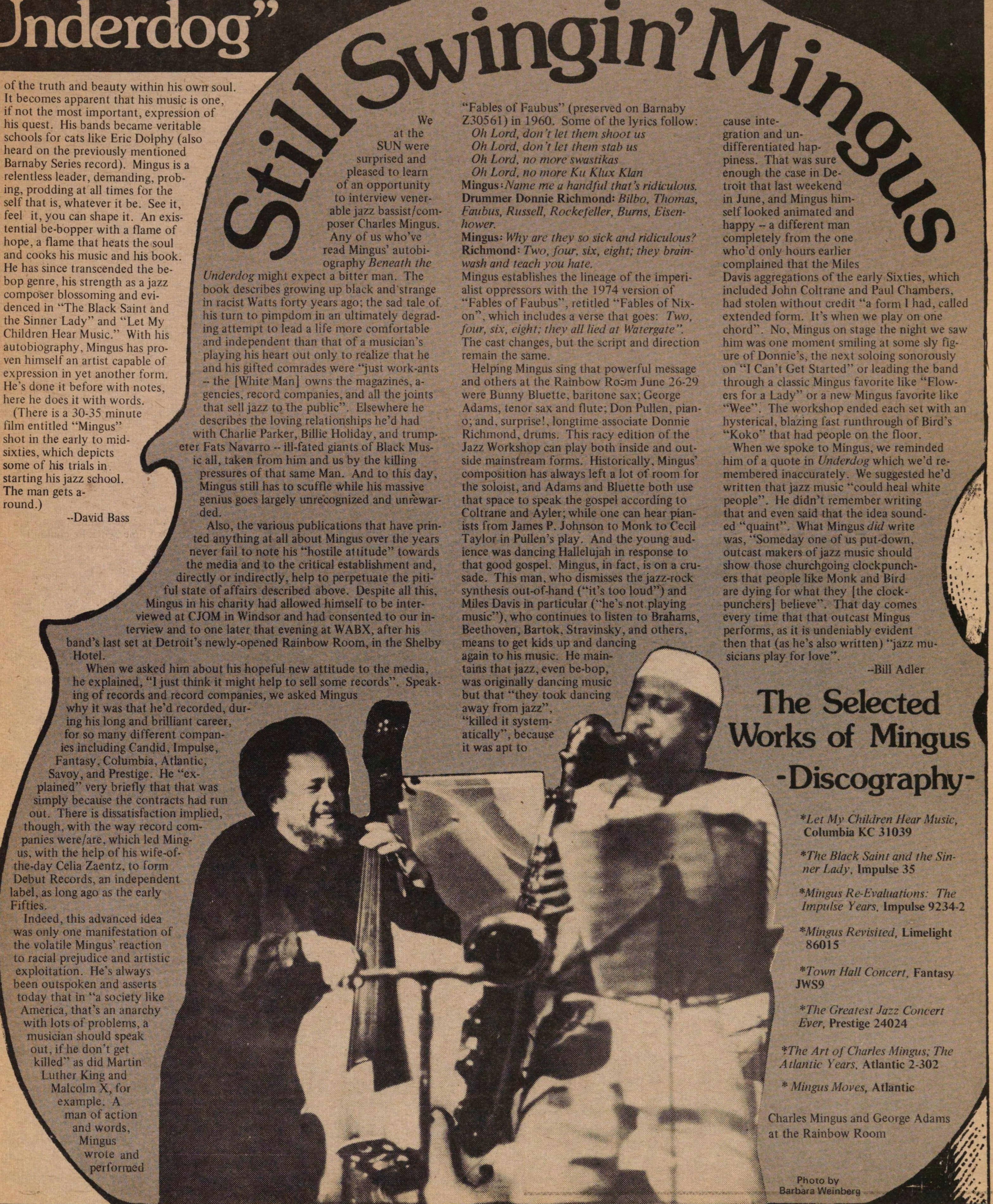 We at the SUN were surprised and pleased to learn of an opportunity to interview venerable jazz bassist/composer Charles Mingus. Any of us who've read Mingus' autobiography Beneath the Underdog might expect a bitter man. The book describes growing up black and strange in racist Watts forty years ago; the sad tale of his turn to pimpdom in an ultimately degrading attempt to lead a life more comfortable and independent than that of a musician's playing his heart out only to realize that he and his gifted comrades were "just work-ants - the [White Man] owns the magazines, agencies, record companies, and all the joints that sell jazz to the public". Elsewhere he describes the loving relationships he'd had with Charlie Parker, Billie Holiday, and trumpeter Fats Navarro -- ill-fated giants of Black Music all, taken from him and us by the killing É pressures of that same Man. And to this day, Mingus still has to scuffle while his massive I genius goes largely unrecognized and unrewarded.
AIso, the various publications that have printed anything at all about Mingus over the years never fail to note his "hostile attitude" towards the media and to the critical establishment and, directly or indirectly, help to perpetuate the pitiful state of affairs described above. Despite all this, Mingus in his charity had allowed himself to be interviewed at CJOM in Windsor and had consented to our interview and to one later that evening at WABX, after his band's last set at Detroit's newly-opened Rainbow Room, in the Shelby Hotel.
When we asked him about his hopeful new attitude to the media, he explained, "I just think it might help to sell some records". Speaking of  records and record companies, we asked Mingus why it was that he'd recorded, during his long and brilliant career, for so many different companies including Candid, Impulse, f Fantasy, Columbia, Atlantic, Savoy, and Prestige. He "explained" very briefly that that was simply because the contracts had run out. There is dissatisfaction implied, though, with the way record companies were/are, which led Mingus, with the help of his wife-of-the-day Celia Zaentz, to form Debut Records, an independent label, as long ago as the early Fifties.
Indeed, this advanced idea was only one manifestation of the volatile Mingus' reaction to racial prejudice and artistic exploitation. He's always been outspoken and asserts today that in "a society like America, that's an anarchy with lots of problems, a musician should speak out, if he don't get killed" as did Martin Luther King and Malcolm X, for example. A man of action and words, Mingus wrote and performed "Fables of Faubus" (preserved on Barnaby Z30561) in 1960. Some of the lyrics follow:
Oh Lord, don't let them shoot us
Oh Lord, don't let them stab us
Oh Lord, no more swastikas
Oh Lord, no more Ku Klux Klan
Mingus: name me a handful that's ridiculous. Drummer Donnie Richmond: Bilbo, Thomas, Faubus, Russell, Rockefeller, Bums, Eisenhower.
Mingus: Why are they so sick and ridiculous? Richmond : Two, four, six, eight; they brainwash and teach you hate.
Mingus establishes the lineage of the imperialist oppressors with the 1974 version of "Fables of Faubus", retitled "Fables of Nixon" which includes a verse that goes: Two, four, six, eight; they all lied at Watergate". The cast changes, but the script and direction remain the same.
Helping Mingus sing that powerful message and others at the Rainbow Room June 26-29 were Bunny Bluette, baritone sax; George Adams, tenor sax and flute; Don Pullen, piano; and, surprise!, longtime associate Donnie Richmond, drums. This racy edition of the Jazz Workshop can play both inside and outside mainstream forms. Historically, Mingus' composition has always Ieft a lot of room for the soloist, and Adams and Bluette both use that space to speak the gospel according to Coltrane and Ayler; while one can hear pianists from James P. Johnson to Monk to Cecil Taylor in Pullen's play. And the young audience was dancing Hallelujah in response to that good gospel. Mingus, in fact, is on a crusade. This man, who dismisses the jazz-rock synthesis out-of-hand ("it's too loud") and Miles Davis in particular ("he's not playing music"), who continues to listen to Brahams, Beethoven, Bartok, Stravinsky, and others, means to get kids up and dancing again to his music. He maintains that jazz, even be-bop, was originally dancing music but that "they took dancing away from jazz", "killed it systematically", because it was apt to cause integration and undifferentiated happiness. That was sure enough the case in Detroit that last weekend in June, and Mingus himself looked animated and happy - a different man completely from the one who'd only hours earlier complained that the Miles Davis aggregations of the early Sixties, which included John Coltrane and Paul Chambers. had stolen without credit "a form l had, called extended form. It's when we play on one chord". No, Mingus on stage the night we saw him was one moment smiling at some sly figure of Donnie's, the next soloing sonorously on "I Can't Get Started" or leading the band through a classic Mingus favorite like "Flowers for a Lady" or a new Mingus favorite like "Wee". The workshop ended each set with an hysterical, blazing fast runthrough of Bird's "Koko" that had people on the floor.
When we spoke to Mingus, we reminded him of a quote in Underdog which we'd remembered inaccurately. We suggested he'd written that jazz music "could heal white people". He didn't remember writing that and even said that the idea sounded "quaint". What Mingus did write was, "Someday one of us put-down, outcast makers of jazz music should show those churchgoing clockpunchers that people like Monk and Bird are dying for what they [the clockpunchers] believe". That day comes every time that that outcast Mingus performs, as it is undeniably evident then that (as he's also written) "jazz musicians play for love".
-- Bill Adler