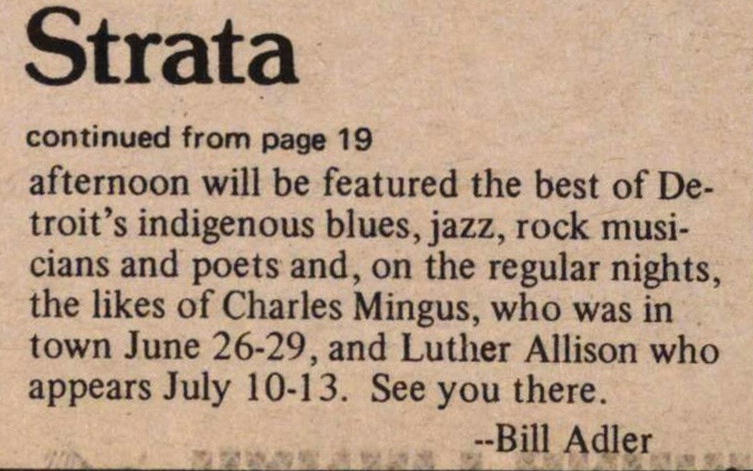 Strata Records has a new release. The simple fact of this statement is the result of a relatively complex history. You see, Detroit 's Strata Corporation, 1974 edition, is only the latest, most together incarnation of an idea which began to fire imaginations in the Fifties. Their existence is growing, a glowing response to the cultural rip-off of artists, and the communities which bear them, perpetrated for centuries by the imperialists in power.

Ron English, guitarist with the CJQ and the Lyman Woodard Trio and president of the Allied Artists Association of 3 America (AAAA), laid it all out on the table in an article originally printed in Detroit's "Tribe" magazine -- "The mechanics of this rip-off are simple, and familiar: take the young and gifted creators and performers out of the community, and ripoff some of the elements of their art; addict the population to the assembly-line "hits" that "keep on coming," each just like the other (because that way they're easier to grind out and "market", i.e., sell back to the people); actively discourage development and innovation by controlling the communications media and keeping the money in the entertainment (financial) capitals of Hollywood and New York. (Quiet as its kept, that's who makes the big money - the companies and their financiers, not this year's star/next year's has-been.) Today, most record companies catering to Black music are mere cogs in an enormous machine which is seeking (through the technique mentioned above) to monopolize, cheapen and standardize a Black Culture so as to exploit it most widely and efficiently."

The Strata Corporation and allied organizations mean to I turn all this around with a concerted self-determination effort to control all the aspects of the creation, production and distribution of their art; establishing themselves at the community level, which is where the rip-off begins.

Historically according to, Ron, Detroit has always had an advanced political scene although it was less politics and more a practical response to a lack of gigs during a time of creative ferment that led guitarist Kenny Burrell and other musicians to form the "Musicians Brotherhood" which ran the very successful World Stage during the late Fifties. Even then. however, an additional element was "fuck the clubowners, we can do it selves." Unfortunately, the jazz scene was soon to dry up. A lot of musicians left for New York where proverbially the grass is greener and it wasn't until John Sinclair, Charles Moore, and others instituted the non-profit, cooperative Artist Workshop, 1964-1966, that things got to brewing again. The Workshop was open to all artists. It was a place to exchange ideas and to create in peace and was essentially an underground phenomenon. It thrived for that two-year span but slowly disintegrated after that because of a combination of police repression of the hip community (56 people arrested one night for possession of "narcotics"; all except John Sinclair released the next day) and the fact that a lot of the people who would naturally have supported the jazz scene, had been seduced by the attractive lure of the Beatles instead.

In 1968 people anywhere with visible left leaning (and artists are always suspect) were feeling the effects of government repression. While life was grim on a day-to-day basis. Ron, who observed that jazz seems to flourish during bad times, asserted that there was a "flock of talent in town " at the time. A lot of this flock decided to stay and fight in Detroit rather than split for New York because eventually they found that it's the same fight everywhere. The members of the Contemporary Jazz Quintet, Ron, and others formed the Detroit Creative Musicians Association which sponsored Sunday afternoon concerts at the Detroit Repertory Theatre and the VFW Hall on the Wayne State campus. It was during this time that the CJQ recorded for Blue Note Records. They discovered that the specific production ideas they's brought to the session had to be iced. A good part of their three-hour session time was used to learn the "Blue Note" sound, the rest to record what they'd been forced to learn. It was from this experience and others like it that Detroit musicians realized that the fight indeed is, as Marx said, to get hold of the means of production. The DCMA folded due to a lack of organizational sense but the Strata Corporation rose from their ashes in July of 1969 with a much broader, clearer concept of what they were about. Their purpose was/is: 1 ) To bring genuine economic stability to the artistic community; 2) To bring artistic integrity to those commercial endeavors perpetrated upon artistic talents; 3) To bring events of cultural relevence to our contemporary community; and 4) To bring genuine communication and cohesion between the various art media by the joint production of education events and projects, thereby bringing real education of other art forms to each artisan and an expression of  his awareness.

Strata organized the "synergry Series" in 1970 with Bud Spangler- drummer with the CJQ, WDET-FM program director, and generally conceded hale fellow - as executive producer. (He remains a principal in the organization to this day). The Series was presented at the Detroit Institute of Art and engendered much good feeling.

It was decided that for both the continued development of the music and for the stability of the organization for Strata to find a permanent place of their own, and in the summer of 1970 they landed on Michigan Avenue, just west of Tiger Stadium. There, almost continuously for the next 18 months the Strata Concert Gallery brought to Detroit the best of both the national and local jazz scenes including appearances by Herbie Hancock, McCoy Tyner, Howard Lucas, the CJQ, and Joe Henderson. And about three months after the move, encouraged by Strata's success. the lbo Cultural Center opened in northwest Detroit and the city found itself blessed with another serious jazz showcase.

Incredibly, the Strata and the lbo each found themselves losing money, frightening amounts of it, and on great groups. Ron attributes the poor turnouts to a number of factors not the least of which was the lack of vision and support of the record companies whose artists the Strata presented. The companies almost never came up with the cash to help promote "their" artists through the local media. Also, as concerns those media, there seemed/seems to be what amounts to institutional racism crippling their ability to discover and support indigenous, albeit countercultural, talent. For example, although there are "classical" music concert reviewers and art show reviewers, there isn't a single person working for either major newspaper who regularly, or even sporadically, covers jazz events. (Which partially explains why, by the way, alternative papers like The Ann Arbor SUN or the Fifth Estate in Detroit spring up).

Meanwhile, back on Michigan Avenue, about Christmas 1971, the furnace blew up and the building had to be vacated just as Strata was recovering from their financial reverses. While they were looking for a new home, the musicians and friends involved with Strata slightly changed their strategy concerning the implementation of the previously-stated purpose and the non-profit AAAA was formed. With financial help from the Michigan Council of the Arts, the A4 began to present concerts at the new Strata Concert Gallery, 46 Selden Street, just off the Wayne State Campus. The Strat Corporation began to concentrate on publishing, production, and records.

And today, in 1974, the Strata Corporation has effected a beachhead with the establishment of a permanent gallery and a 3-way cooperative with Rainbow Multi-Media and and Butterfly Productions (whose 16-track mobile recording unit - the same one used to record The Concert for Bangla-Desh and JCOA's Escaltor Over The Hill - will be kicking out Strata Records fall release) that means the continued realization of purpose No. 4 - affiliation with similarly-oriented groups; organizations dedicated to artistic integrity and commercial autonomy. All of this activity represents the most advanced, complete, cultural self-determination effort in the country, because the Strata Corp, unlike, say Grateful Dead Records, controls all the aspects of the production of their art, including distribution. Consider also that the joint efforts of Strata and RMM produced the opening of "The Rainbow Room" in the Shelby Hotel in Detroit, where every Sunday afternoon will be featured the best of Detroit's indigenous blues, jazz, rock musicians and poets and, on the regular nights, the likes of Charles Mingus, who was in town June 26-29, and Luther Allison who appears July 10-13. See you there.