It Ain't Like They Say On Tv! The Truth About Non-prescription Drugs 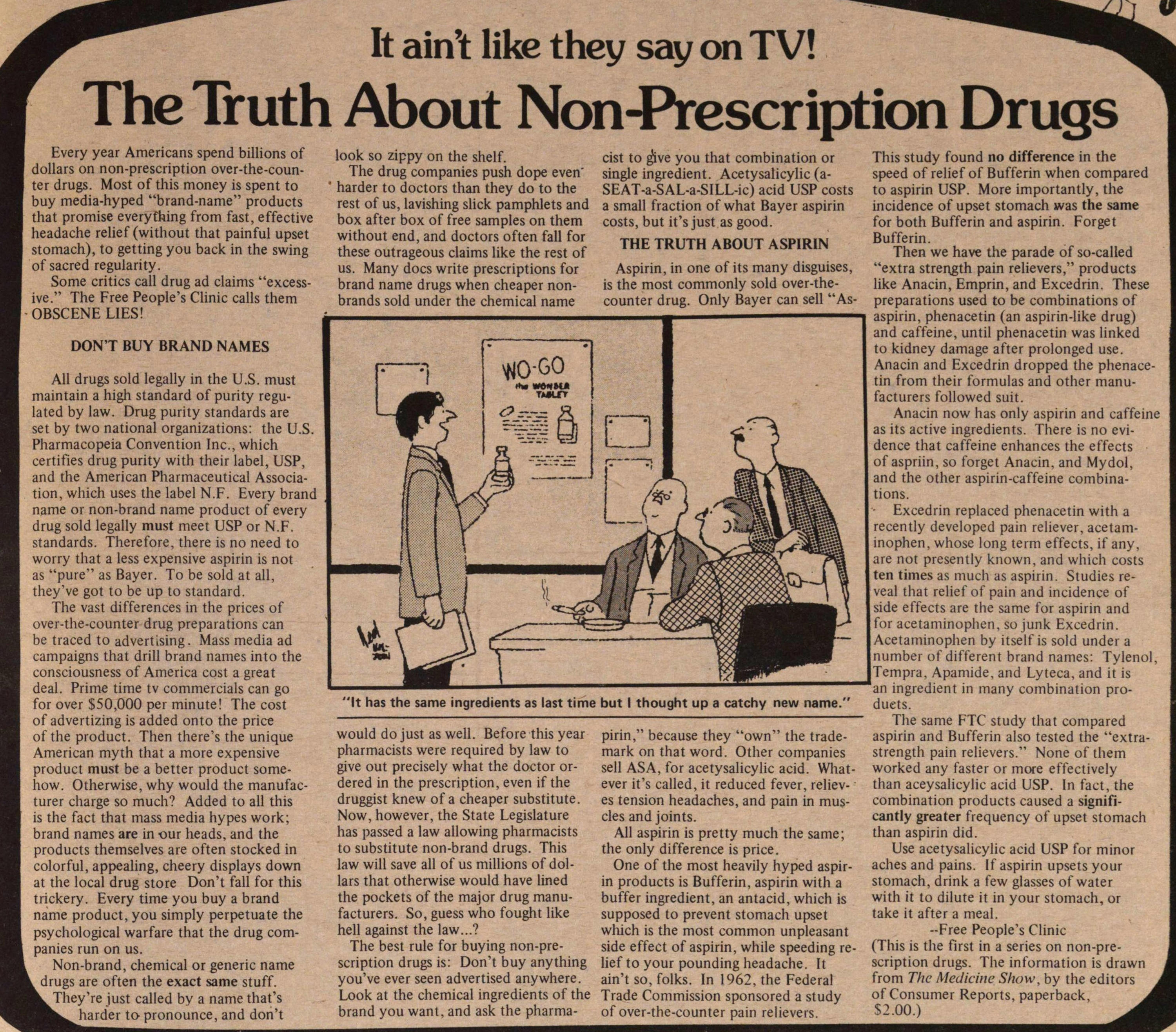 Every year Americans spend billions of I dollars on non-prescription over-the-counI ter drugs. Most of this money is spent to I buy media-hyped "brand-name" products I that promise everyfhing from fast, effective I headache relief (without that painful upset I stomach), to getting you back in the swing I of sacred regularity. Some critics cali drug ad claims "excessI ive." The Free People's Clinic calis them ■ OBSCENE LIES! DONT BUY BRAND NAMES All drugs sold legally in the U.S. must maintain a high standard of purity regulated by law. Drug purity standards are set by two national organizations: the U.S. Pharmacopeia Convention Inc., which certifies drug purity with their label, USP, and the American Phannaceutical Association, which uses the label N.F. Every brand name or non-brand name product of every drug sold legally must meet USP or N.F. standards. Therefore, there is no need to I worry that a less expensive aspirin is not I as "pure" as Bayer. To be sold at all, they've got to be up to standard. The vast differences in the prices of over-the-counter drug preparations can be traced to advertising. Mass media ad I campaigns that drill brand names into the I consciousness of America cost a great I deal. Prime time tv commercials can go for over $50,000 per minute! The cost I of advertizing is added onto the price I of the product. Then there's the unique American myth that a more expensive product must be a better product somehow. Otherwise, why would the manufacI turer charge so much? Added to all this I is the fact that mass media hypes work; brand names are in our heads, and the products themselves are often stocked in colorful, appealing, cheery displays down at the local drug store Don't fall for this trickery. Every time you buy a brand I name product, you simply perpetúate the I psychological warfare that the drug comI panies run on us. H Non-brand, chemical or generic name L drugs are often the exact same stuff. L They're just called by a name that's V harder to pronounce, and don't look so zippy on the shelf. The drug companies push dope even' ' harder to doctors than they do to the rest of us, lavishing slick pamphlets and box after box of free samples on them without end, and doctors often fall for these outrageous claims like the rest of us. Many does write prescriptions for brand name drugs when cheaper nonbrands sold under the chemical name would do just as well. Before this year pharmacists were required by law to give out precisely what the doctor ordered in the prescription, even if the druggist knew of a cheaper substitute. Now, however, the State Legislature has passed a law allowing pharmacists to substitute non-brand drugs. This law will save all of us millions of dollars that otherwise would have lined the pockets of the major drug manufacturers. So, guess who fought like heil against the law...? The best rule for buying non-prescription drugs is: Don't buy anything you've ever seen advertised anywhere. Look at the chemical ingredients of the brand you want, and ask the eist to gW you that combination or single ingrediënt. Acetysalicylic (aSEAT-a-SAL-a-SILL-ic) acid USP costs a small fraction of what Bayer aspirin costs, but it's just as good. THE TRUTH ABOUT ASPIRIN Aspirin, in one of its many disguises, is the most commonly sold over-thecounter drug. Only Bayer can sell pirin," because they "own" the trademark on that word. Other companies sell ASA, for acetysalicylic acid. Wliatever it's called, it reduced fever, relieves tensión headaches, and pain in muscles and joints. All aspirin is pretty much the same; the only difference is price. One of the most heavily hyped aspirin products is Bufferin, aspirin with a buffer ingrediënt, an antacid, which is supposed to prevent stomach upset wlüch is the most common unpleasant side effect of aspirin, while speeding relief to your pounding headache. it ain't so, folks. In 1962, the Federal Trade Commission sponsored a study of over-the-counter pain relievers. This study found no difference in the speed of relief of Bufferin when compared to aspirin USP. More importantly, the incidence of upset stomach was the same for both Bufferin and aspirin. Forget Bufferin. Then we have the parade of so-called "extra strergth pain relievers," products like Anacin, Emprin, and Excedrin. These preparations used to be combinations of aspirin, phenacetin (an aspirin-like drug) and caffeine, until phenacetin was linked to kidney damage after prolonged use. Anacin and Excedrin dropped the phenacetin from their formulas and other manufacturers followed suit. Anacin now has only aspirin and caffeine as its active ingredients. There is no evidence that caffeine enhances the effects of aspriin, so forget Anacin, and Mydol, and the other aspirin-caffeine combinations. Excedrin replaced phenacetin with a recently developed pain reliever, acetaminophen, whose long term effects, if any, are not presently known, and which costs ten times as much as aspirin. Studies reveal that relief of pain and incidence of side effects are the same for aspirin and for acetaminophen, so junk Excedrin. Acetaminophen by itself is sold under a number of different brand names: Tylenol, Tempra, Apamide, and Lyteca, and it is an ingrediënt in many combination produets. The same FTC study that compared aspirin and Bufferin also tested the "extrastrength pain relievers." None of them worked any faster or more effectively than aceysalicylic acid USP. In fact, the combination products caused a significantly greater frequency of upset stomach than aspirin did. Use acetysalicylic acid USP for minor aches and pains. If aspirin upsets your stomach, drink a few glasses of water with it to dilute it in your stomach, or take it after a meal. (This is the first in a series on non-preI scription drugs. The information is drawn Ë from The Medicine Show, by the editors Ê ofConsumer Reports, paperback, M $2.00.)