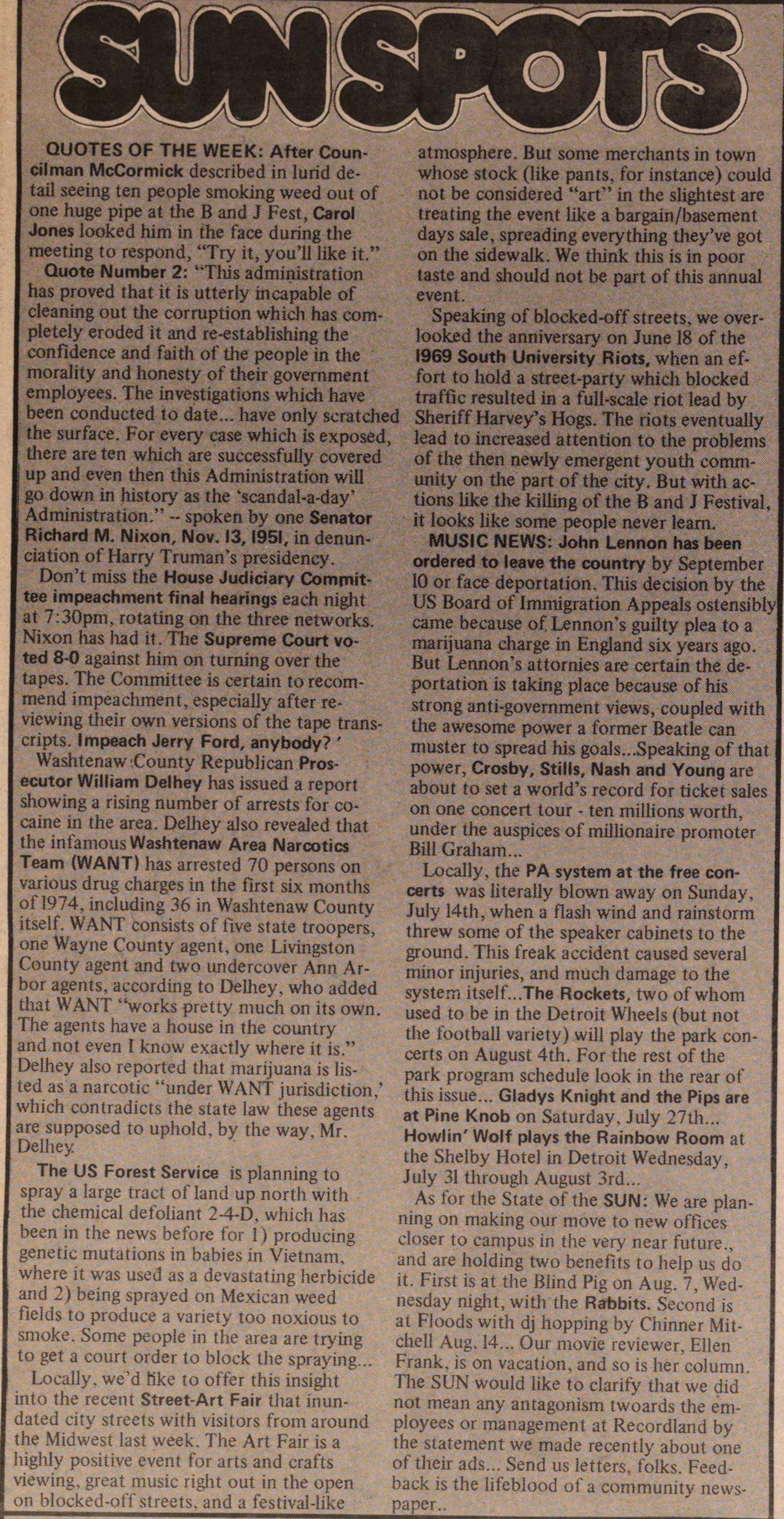 QUOTES OF THE WEEK: After Councilman McCormick described in lurid detail seeing ten people smoking weed out of one huge pipe at the B and J Fest, Carol Jones looked him in the face during the meeting to respond, "Try it, you'Il like it."

Quote Number 2: "This administration has proved that it is utterly incapable of cleaning out the corruption which has completely eroded it and re-establishing the confidence and faith of the people in the morality and honesty of their government employees. The investigations which have been conducted to date... have only scratched the surface. For every case which is exposed, there are ten which are successfully covered up and even then this Administration will go down in history as the 'scandal-a-day' Administration." -- spoken by one Senator Richard M. Nixon, Nov. 13, 1951, in denunciation of Harry Truman's presidency.

Don't miss the House Judiciary Committee impeachment final hearings each night at 7:30pm, rotating on the three networks. Nixon has had it. The Supreme Court voted 8-0 against him on turning over the tapes. The Committee is certain to recommend impeachment, especially after reviewing their own versions of the tape transcripts. Impeach Jerry Ford, anybody?

Washtenaw County Republican Prosecutor William Delhey has issued a report showing a rising number of arrests for cocaine in the area. Delhey also revealed that the infamous Washtenaw Area Narcotics Team (WANT) has arrested 70 persons on various drug charges in the first six months of 1974, including 36 in Washtenaw County itself. WANT consists of five state troopers, one Wayne County agent, one Livingston County agent and two undercover Ann Arbor agents, according to Delhey, who added that WANT "works pretty much on its own. The agents have a house in the country and not even I know exactly where it is." Deihey also reported that marijuana is listed as a narcotic "under WANT jurisdiction,' which contradicts the state law these agents are supposed to uphold, by the way Mr Deihey.

The US Forest Service is planning to spray a large tract of land up north with the chemical defoliant 2-4-D, which has been in the news before for 1) producing genetic mutations in babies in Vietnam, where it was used as a devastating herbicide and 2) being sprayed on Mexican weed fields to produce a variety too noxious to smoke. Some people in the area are trying to get a court order to block the spraying...

Locally, we'd like to offer this insight into the recent Street-Art Fair that inundated city streets with visitors from around the Midwest last week. The Art Fair is a highly positive event for arts and crafts viewing, great music right out in the open on blocked-off streets. and a festival-like atmosphere. But some merchants in town whose stock (like pants, for instance) could not be considered "art" in the slightest are treating the event like a bargain / basement days sale, spreading everything they've got on the sidewalk. We think this is in poor taste and should not be part of this annual event.

Speaking of blocked-off streets, we overlooked the anniversary on June 18 of the 1969 South University Riots, when an effort to hold a street-party which blocked traffic resulted in a full-scale riot lead by Sheriff Harvey's Hogs. The riots eventually lead to increased attention to the problems of the then newly emergent youth community on the part of the city. But with actions like the killing of the B and J Festival, it looks like some people never learn.

MUSIC NEWS: John Lennon has been ordered to leave the country by September 10 or face deportation. This decision by the US Board of Immigration Appeals ostensibly came because of Lennon's guilty plea to a marijuana charge in England six years ago. But Lennon's attorneys are certain the deportation is taking place because of his strong anti-government views, coupled with the awesome power a former Beatle can muster to spread his goals...Speaking of that power, Crosby, Stills, Nash and Young are about to set a world's record for ticket sales on one concert tour - ten millions worth, under the auspices of millionaire promoter Bill Graham...

Locally, the PA system at the free concerts was literally blown away on Sunday, July 14th, when a flash wind and rainstorm threw some of the speaker cabinets to the ground. This freak accident caused several minor injuries, and much damage to the system itself...The Rockets, two of whom used to be in the Detroit Wheels (but not the football variety) will play the park concerts on August 4th. For the rest of the park program schedule look in the rear of this issue... Gladys Knight and the Pips are at Pine Knob on Saturday, July 27th... Howlin' Wolf plays the Rainbow Room at the Shelby Hotel in Detroit Wednesday, July 31 through August 3rd...

As for the State of the SUN: We are planning on making our move to new offices closer to campus in the very near future, and are holding two benefits to help us do it. First is at the Blind Pig on Aug. 7, Wednesday night, with the Rabbits. Second is at Floods with dj hopping by Chinner Mitchell Aug. 14... Our movie reviewer, Ellen Frank, is on vacation, and so is her column. The SUN would like to clarify that we did not mean any antagonism towards the employees or management at Recordland by the statement we made recently about one of their ads... Send us letters, folks. Feedback is the lifeblood of a community newspaper.