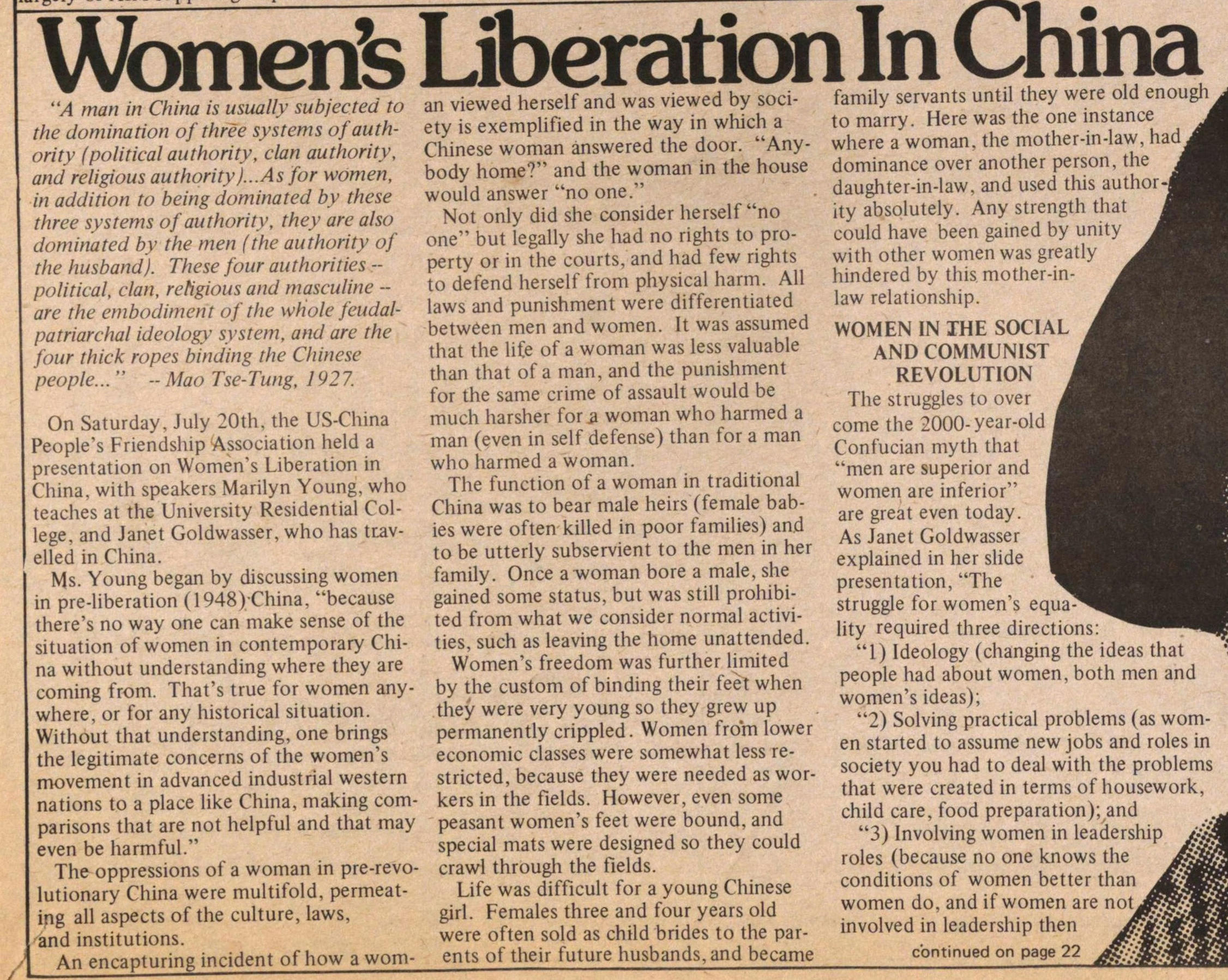 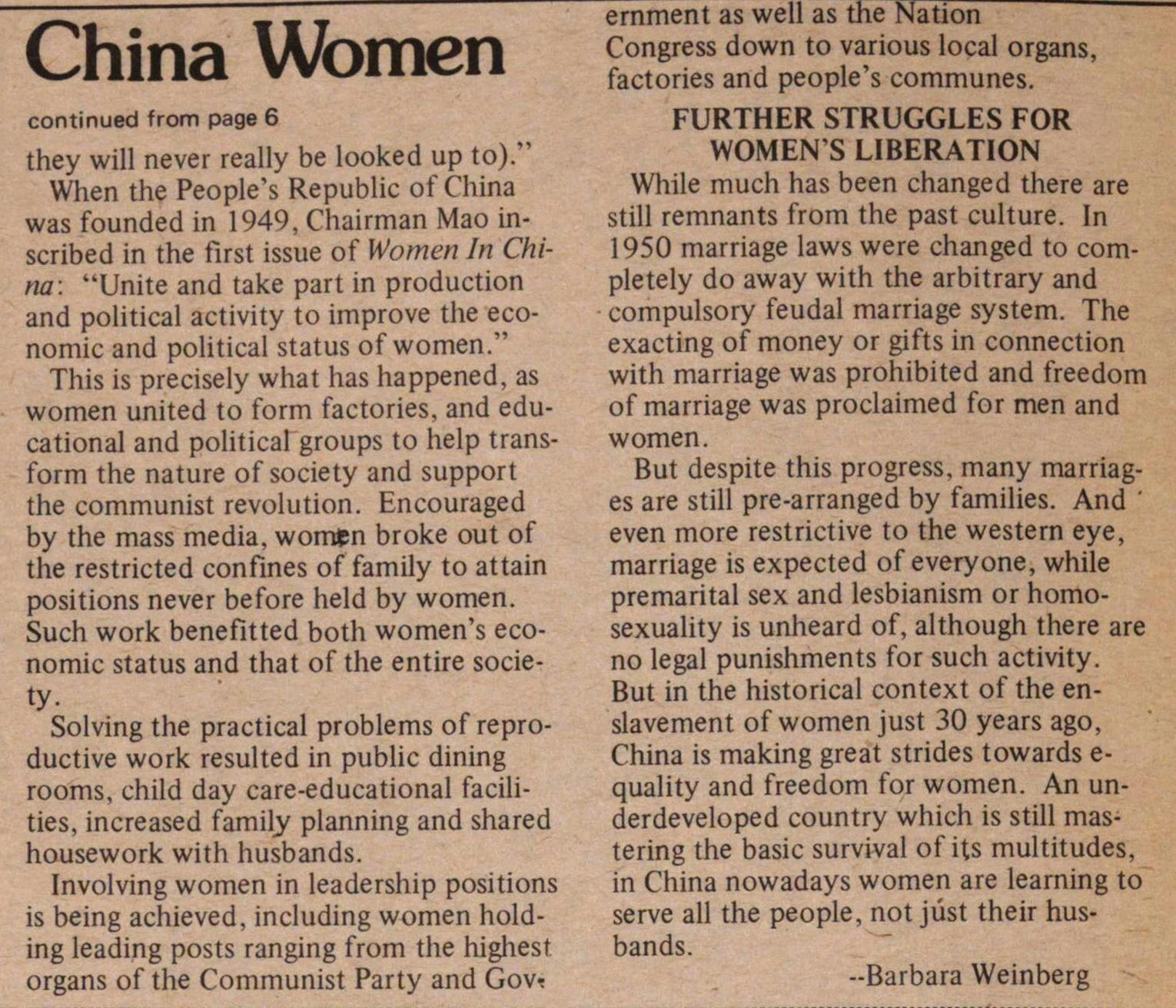 "A man in China is usually subjected to the domination of three systems of authority (political authority, clan authority, and religious authority )...As for women, in addition to being dominated by these three systems of authority, they are also dominated by the men (the authority of the husband). These four authorities - political, clan, religious and masculine -- are the embodiment of the whole feudal-patriarchal ideology system, and are the four thick ropes binding the Chinese people... " - Mao Tse-Tung, 1927.

On Saturday, July 20th, the US-China People's Friendship Association held a presentation on Women's Liberation in China, with speakers Marilyn Young, who teaches at the University Residential College, and Janet Goldwasser, who has travelled in China.

Ms. Young began by discussing women in pre-liberation (1948) China, "because there's no way one can make sense of the situation of women in contemporary China without understanding where they are coming from. That's true for women anywhere, or for any historical situation. Without that understanding, one brings the legitimate concerns of the women's movement in advanced industrial western nations to a place like China, making comparisons that are not helpful and that may even be harmful."

The oppressions of a woman in pre-revolutionary China were multifold, permeating all aspects of the culture, laws, and institutions.

An encapturing incident of how a woman viewed herself and was viewed by society is exemplified in the way in which a Chinese woman answered the door. "Anybody home?" and the woman in the house would answer "no one."

Not only did she consider herself "no one" but legally she had no rights to property or in the courts, and had few rights to defend herself from physical harm. All laws and punishment were differentiated between men and women. It was assumed that the life of a woman was less valuable than that of a man, and the punishment for the same crime of assault would be much harsher for a woman who harmed a man (even in self defense) than for a man who harmed a woman.

The function of a woman in traditional China was to bear male heirs (female babies were often killed in poor families) and to be utterly subservient to the men in her family. Once a woman bore a male, she gained some status, but was still prohibited from what we consider normal activities, such as leaving the home unattended.

Women's freedom was further limited by the custom of binding their feet when they were very young so they grew up permanently crippled. Women from lower economic classes were somewhat less restricted, because they were needed as workers in the fields. However, even some peasant women's feet were bound, and special mats were designed so they could crawl through the fields.

Life was difficult for a young Chinese girl. Females three and four years old were often sold as child brides to the parents of their future husbands, and became family servants until they were old enough to marry. Here was the one instance where a woman, the mother-in-law, had dominance over another person, the daughter-in-law, and used this authority absolutely. Any strength that could have been gained by unity with other women was greatly hindered by this mother-in-law relationship.

WOMEN IN THE SOCIAL AND COMMUNIST REVOLUTION

The struggles to over come the 2000 year-old Confucian myth that "men are superior and women are inferior" are great even today. As Janet Goldwasser explained in her slide presentation, "The struggle tor women's equality required three directions: "1) Ideology (changing the ideas that people had about women, both men and women's ideas); "2) Solving practical problems (as women started to assume new jobs and roles in society you had to deal with the problems that were created in terms of housework, child care, food preparation); and "3) Involving women in leadership roles (because no one knows the conditions of women better than women do, and if women are not involved in leadership then they will never really be looked up to)."

When the People's Republic of China was founded in 1949, Chairman Mao inscribed in the first issue of Women In China: "Unite and take part in production and political activity to improve the economic and political status of women."

This is precisely what has happened, as women united to form factories, and educational and political groups to help transform the nature of society and support the communist revolution. Encouraged by the mass media, women broke out of the restricted confines of family to attain positions never before held by women. Such work benefitted both women's economic status and that of the entire society.

Involving women in leadership positions is being achieved, including women holding leading posts ranging from the highest organs of the Communist Party and Government as well as the Nation Congress down to various local organs, factories and people's communes.

While much has been changed there are still remnants from the past culture. In 1950 marriage laws were changed to completely do away with the arbitrary and compulsory feudal marriage system. The exacting of money or gifts in connection with marriage was prohibited and freedom of marriage was proclaimed for men and women.

But despite this progress, many marriages are still pre-arranged by families. And even more restrictive to the western eye, marriage is expected of everyone, while premarital sex and lesbianism or homosexuality is unheard of, although there are no legal punishments for such activity. But in the historical context of the enslavement of women just 30 years ago, China is making great strides towards equality and freedom for women. An underdeveloped country which is still mastering the basic survival of its multitudes, in China nowadays women are learning to serve all the people, not just their husbands.