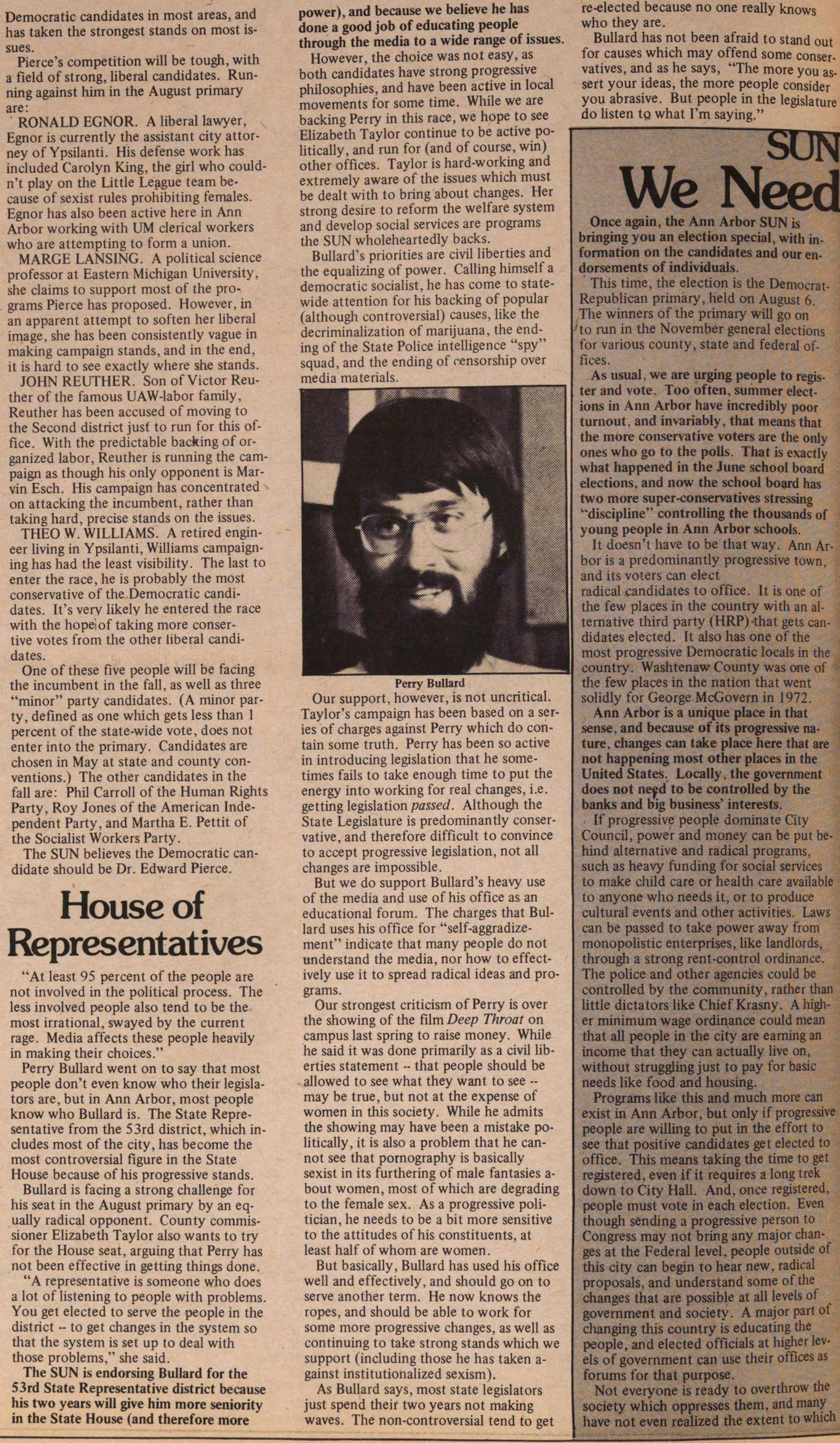 "At least 95 percent of the people are not involved in the political process. The less involved people also tend to be the most irrational, swayed by the current rage. Media affects these people heavily in making their choices."

Perry Bullard went on to say that most people don't even know who their legislators are, but in Ann Arbor, most people know who Bullard is. The State Representative from the 53rd district, which includes most of the city, has become the most controversial figure in the State House because of his progressive stands.

Bullard is facing a strong challenge for his seat in the August primary by an equally radical opponent. County commissioner Elizabeth Taylor also wants to try for the House seat, arguing that Perry has not been effective in getting things done.

"A representative is someone who does a lot of listening to people with problems. You get elected to serve the people in the district -- to get changes in the system so that the system is set up to deal with those problems," she said.

The SUN is endorsing Bullard for the 53rd State Representative district because his two years will give him more seniority in the State House (and therefore more power), and because we believe he has done a good job of educating people through the media to a wide range of issues.

However, the choice was not easy, as both candidates have strong progressive philosophies, and have been active in local movements for some time. While we are backing Perry in this race, we hope to see Elizabeth Taylor continue to be active politically, and run for (and of course, win) other offices. Taylor is hard-working and extremely aware of the issues which must be dealt with to bring about changes. Her strong desire to reform the welfare system and develop social services are programs the SUN wholeheartedly backs.

Bullard's priorities are civil liberties and the equalizing of power. Calling himself a democratic socialist, he has come to statewide attention for his backing of popular (although controversial) causes, like the decriminalization of marijuana, the ending of the State Police intelligence "spy" squad, and the ending of censorship over media materials.

Our support, however, is not uncritical. Taylor's campaign has been based on a series of charges against Perry which do contain some truth. Perry has been so active in introducing legislation that he sometimes fails to take enough time to put the energy into working for real changes, i.e. getting legislation passed. Although the State Legislature is predominantly conservative, and therefore difficult to convince to accept progressive legislation, not all changes are impossible.

But we do support Bullard's heavy use of the media and use of his office as an educational forum. The charges that Bullard uses his office for "self-aggradizement" indicate that many people do not understand the media, nor how to effectively use it to spread radical ideas and programs.

Our strongest criticism of Perry is over the showing of the film Deep Throat on campus last spring to raise money. While he said it was done primarily as a civil liberties statement - that people should be allowed to see what they want to see -- may be true, but not at the expense of women in this society. While he admits the showing may have been a mistake politically, it is also a problem that he cannot see that pornography is basically sexist in its furthering of male fantasies about women, most of which are degrading to the female sex. As a progressive politician, he needs to be a bit more sensitive to the attitudes of his constituents, at least half of whom are women.

But basically, Bullard has used his office well and effectively, and should go on to serve another term. He now knows the ropes, and should be able to work for some more progressive changes, as well as continuing to take strong stands which we support (including those he has taken against institutionalized sexism).

As Bullard says, most state legislators just spend their two years not making waves. The non-controversial tend to get re-elected because no one really knows who they are.

Bullard has not been afraid to stand out for causes which may offend some conservatives, and as he says, "The more you assert your ideas, the more people consider you abrasive. But people in the legislature do listen to what I'm saying."