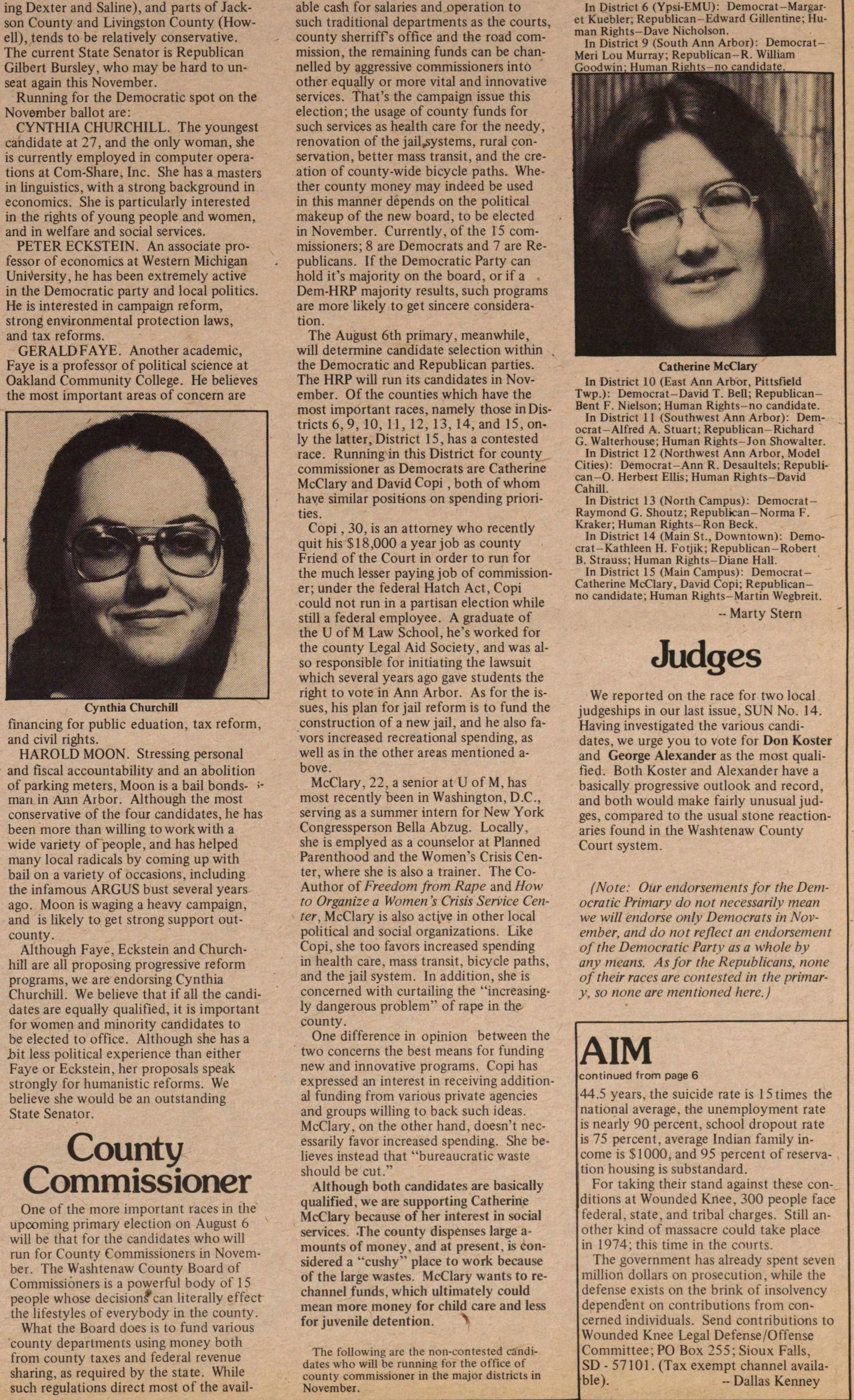 One of the more important races in the upcoming primary election on August 6 will be that for the candidates who will run for County Commissioners in November. The Washtenaw County Board of Commissioners is a powerful body of 15 people whose decisions can literally effect the lifestyles of everybody in the county.

What the Board does is to fund various county departments using money both from county taxes and federal revenue sharing, as required by the state. While such regulations direct most of the available cash for salaries and operation to such traditional departments as the courts, county sherriff's office and the road commission, the remaining funds can be channelled by aggressive commissioners into other equally or more vital and innovative services. That's the campaign issue this election; the usage of county funds for such services as health care for the needy, renovation of the jail systems, rural conservation, better mass transit, and the creation of county-wide bicycle paths. Whether county money may indeed be used in this manner depends on the political makeup of the new board, to be elected in November. Currently, of the 15 commissioners; 8 are Democrats and 7 are Republicans. If the Democratic Party can hold it's majority on the board, or if a Dem-HRP majority results, such programs are more likely to get sincere consideration.

The August 6th primary, meanwhile, will determine candidate selection within the Democratic and Republican parties. The HRP will run its candidates in November. Of the counties which have the most important races, namely those in Districts 6, 9,10,11,12,13,14, and 15, only the latter, District 15, has a contested race. Running in this District for county commissioner as Democrats are Catherine McClary and David Copi, both of whom have similar positions on spending priorities.

Copi , 30, is an attorney who recently quit his $18,000 a year job as county Friend of the Court in order to run for the much lesser paying job of commissioner; under the federal Hatch Act, Copi could not run in a partisan election while still a federal employee. A graduate of the U of M Law School, he's worked for the county Legal Aid Society, and was also responsible for initiating the lawsuit which several years ago gave students the right to vote in Ann Arbor. As for the issues, his plan for jail reform is to fund the construction of a new jail, and he also favors increased recreational spending, as well as in the other areas mentioned above.

McClary, 22, a senior at U of M, has most recently been in Washington, D.C., serving as a summer intern for New York Congressperson Bella Abzug. Locally, she is employed as a counselor at Planned Parenthood and the Women's Crisis Center, where she is also a trainer. The Co-Author of Freedom from Rape and How to Organize a Women's Crisis Service Center, McClary is also active in other local political and social organizations. Like Copi, she too favors increased spending in health care, mass transit, bicycle paths, and the jail system. In addition, she is concerned with curtailing the "increasingly dangerous problem" of rape in the county.

One difference in opinion between the two concerns the best means for funding new and innovative programs. Copi has expressed an interest in receiving additional funding from various private agencies and groups willing to back such ideas. McClary, on the other hand, doesn't necessarily favor increased spending. She believes instead that "bureaucratic waste should be cut."

Although both candidates are basically qualified, we are supporting Catherine McClary because of her interest in social services. The county dispenses large amounts of money, and at present, is considered a "cushy" place to work because of the large wastes. McClary wants to rechannel funds, which ultimately could mean more money for child care and less for juvenile detention.

The following are the non-contested candidates who will be running for the office of county commissioner in the major districts in November.