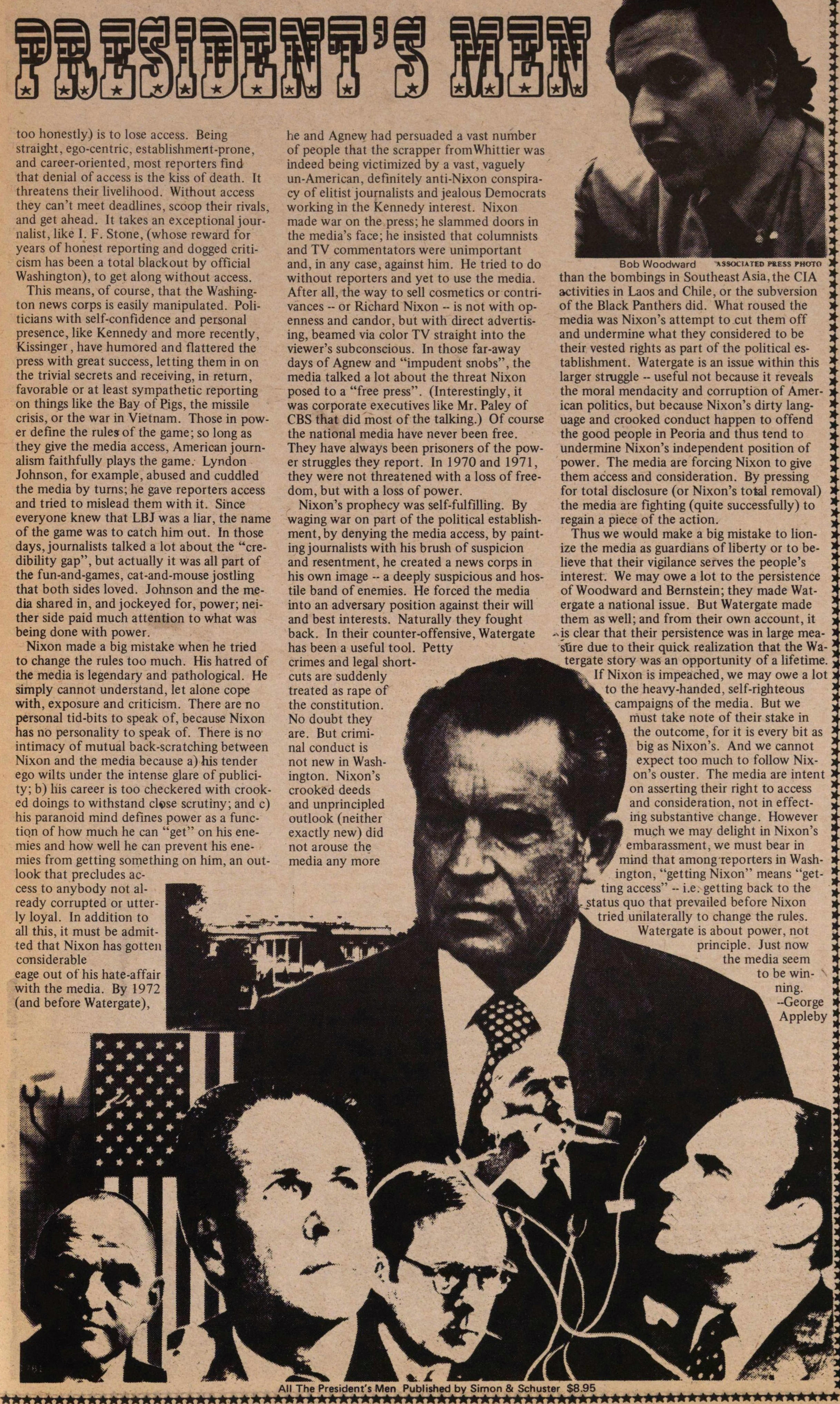 [BOOK REVIEW: ALL THE] PRESIDENT'S MEN

too honestly) is to lose access. Being straight, ego-centric, establishment-prone, and career-oriented, most reporters find that denial of access is the kiss of death. It threatens their livelihood. Without access they can't meet deadlines, scoop their rivals, and get ahead. It takes an exceptional journalist, like I. F. Stone, (whose reward for years of honest reporting and dogged criticism has been a total blackout by official Washington), to get along without access.

This means, of course, that the Washington news corps is easily manipulated. Politicians with self-confidence and personal presence, like Kennedy and more recently, Kissinger , have humored and flattered the press with great success, letting them in on the trivial secrets and receiving, in return, favorable or at least sympathetic reporting on things like the Bay of Pigs, the missile crisis, or the war in Vietnam. Those in power define the rules of the game; so long as they give the media access, American journalism faithfully plays the game. Lyndon Johnson, for example, abused and cuddled the media by turns; he gave reporters access and tried to mislead them with it. Since everyone knew that LBJ was a liar, the name of the game was to catch him out. In those days, journalists talked a lot about the "credibility gap", but actually it was all part of the fun-and-games, cat-and-mouse jostling that both sides loved. Johnson and the media shared in, and jockeyed for, power; neither side paid much attention to what was being done with power.

Nixon made a big mistake when he tried to change the rules too much. His hatred of the media is legendary and pathological. He simply cannot understand, let alone cope with, exposure and criticism. There are no personal tid-bits to speak of, because Nixon has no personality to speak of. There is no intimacy of mutual back-scratching between Nixon and the media because a) his tender ego wilts under the intense glare of publicity; b) his career is too checkered with crooked doings to withstand close scrutiny; and c) his paranoid mind defines power as a function of how much he can "get" on his enemies and how well he can prevent his enemies from getting something on him, an outlook that precludes access to anybody not already corrupted or utterly loyal. In addition to all this, it must be admitted that Nixon has gotten considerable mileage out of his hate-affair with the media. By 1972 (and before Watergate), he and Agnew had persuaded a vast number of people that the scrapper from Whittier was indeed being victimized by a vast, vaguely un-American, definitely anti-Nixon conspiracy of elitist journalists and jealous Democrats working in the Kennedy interest. Nixon made war on the press; he slammed doors in the media's face; he insisted that columnists and TV commentators were unimportant and, in any case, against him. He tried to do without reporters and yet to use the media. After all, the way to sell cosmetics or contrivances -- or Richard Nixon -- is not with openness and candor, but with direct advertising, beamed via color TV straight into the viewer's subconscious. In those far-away days of Agnew and "impudent snobs", the media talked a lot about the threat Nixon posed to a "free press". (Interestingly, it was corporate executives like Mr. Paley of CBS that did most of the talking.) Of course the national media have never been free. They have always been prisoners of the power struggles they report. In 1970 and 1971, they were not threatened with a loss of freedom, but with a loss of power.

Nixon's prophecy was self-fulfilling. By waging war on part of the political establishment, by denying the media access, by painting journalists with his brush of suspicion and resentment, he created a news corps in his own image - a deeply suspicious and hostile band of enemies. He forced the media into an adversary position against their will and best interests. Naturally they fought back. In their counter-offensive, Watergate has been a useful tool. Petty crimes and legal cuts are suddenly treated as rape of the constitution. No doubt they are. But criminal conduct is i not new in Washington. Nixon's crooked deeds and unprincipled outlook (neither exactly new) did not arouse the media any more than the bombings in Southeast Asia, the CIA activities in Laos and Chile, or the subversion of the Black Panthers did. What roused the media was Nixon's attempt to cut them off and undermine what they considered to be their vested rights as part of the political establishment. Watergate is an issue within this larger struggle -- useful not because it reveals the moral mendacity and corruption of American politics, but because Nixon's dirty language and crooked conduct happen to offend the good people in Peoria and thus tend to undermine Nixon's independent position of power. The media are forcing Nixon to give them access and consideration. By pressing for total disclosure (or Nixon's total removal) the media are fighting (quite successfully) to regain a piece of the action.

Thus we would make a big mistake to lionize the media as guardians of liberty or to believe that their vigilance serves the people's interest. We may owe a lot to the persistence of Woodward and Bernstein; they made Watergate a national issue. But Watergate made them as well; and from their own account, it is clear that their persistence was in large measure due to their quick realization that the Watergate story was an opportunity of a lifetime.

If Nixon is impeached, we may owe a lot to the heavy-handed, self-righteous campaigns of the media. But we must take note of their stake in the outcome, for it is every bit as big as Nixon's. And we cannot expect too much to follow Nixon's ouster. The media are intent on asserting their right to access and consideration, not in effecting substantive change. However much we may delight in Nixon's embarrassment. we must bear in mind that among reporters in Washington, "getting Nixon" means getting access" -- i.e. getting back to the status quo that prevailed before Nixon tried unilaterally to change the rules. Watergate is about power, not principle. Just now the media seem to be winning.