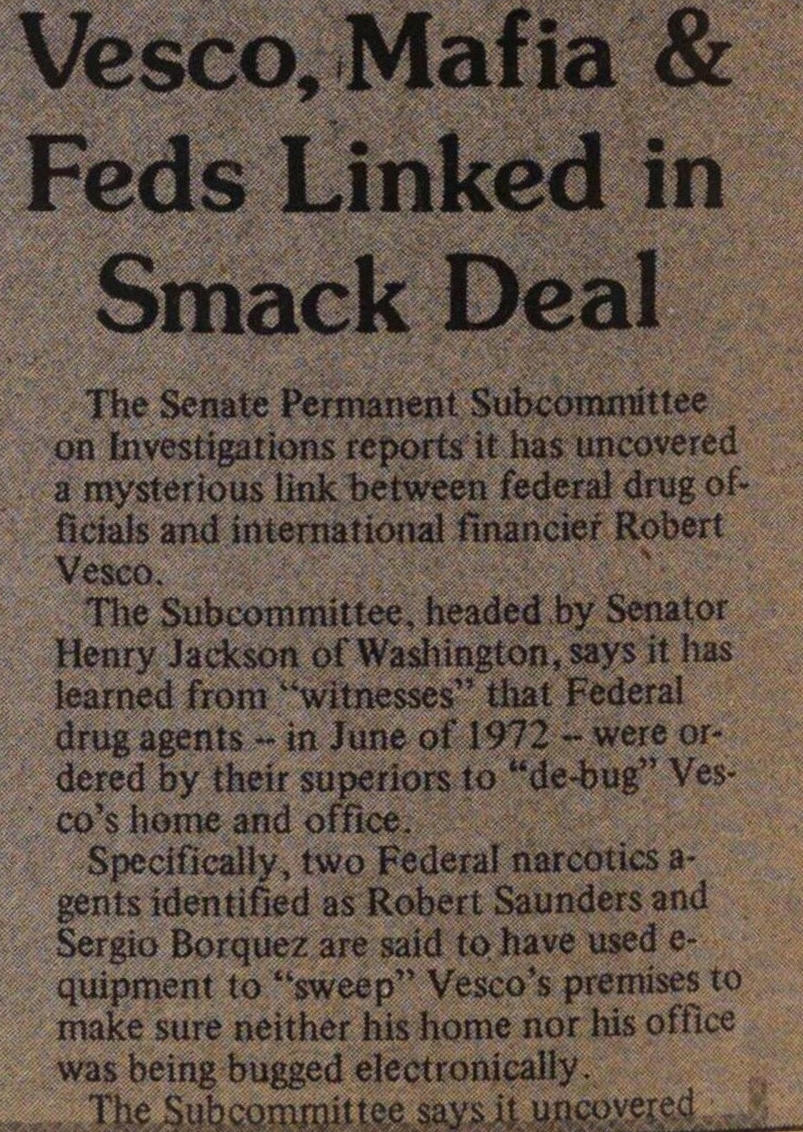 The Senate Permanent Subcommittee on Investigations reports it has uncovered a mysterious link between federal drug officials and international financier Robert Vesco.

The Subcommittee, headed by Senator Henry Jackson of Washington, says it has learned from "witnesses" that Federal drug agents - in June of 1972 - were ordered by their superiors to "de-bug" Vesco's home and office.

Specifically, two Federal narcotics agents identified as Robert Saunders and Sergio Borquez are said to have used equipment to "sweep" Vesco's premises to make sure neither his home nor his office was being bugged electronically.

The Subcommittee says it uncovered this Vesco--drug agency link while looking into virtually incredible charges made by a former US Drug Agency informer named Frank Peroff.

Peroff has testified that, last summer, he had infiltrated an international heroin smuggling ring involving members of the Mafia in Montreal. According to Peroff, he was instructed by his Mafia connections to rent a Lear jet, fly to the Bahamas and pick up $300,000 in cash, and then to fly to Europe to purchase heroin.

Peroff told Senators that he would then return to the United States with the heroin, where he had made arrangements with US drug agents to be on hand to make arrests. Peroff says that the plan was all set to go when Vesco's name suddenly appeared in the middle of the heroin scheme. The drug informer says he was told that Vesco would be the source of the $300,000, to be used to purchase the drugs and that he passed this information along to his superiors.

As Peroff tells it, the minute he mentioned Vesco's name, the Federal investigation was halted. Peroff states that he proceeded to warn White House officials about the "sabotaged investigation", but that his warnings were ignored.

Both the Washington Post and the New York Times have previously reported that Peroff has surrended tapes of his telephone conversations -- backing up his allegations -- to Senate investigators.

Senator Henry Jackson's subcommittee will hold the first public hearings into this potentially explosive case on July 30 in Washington.