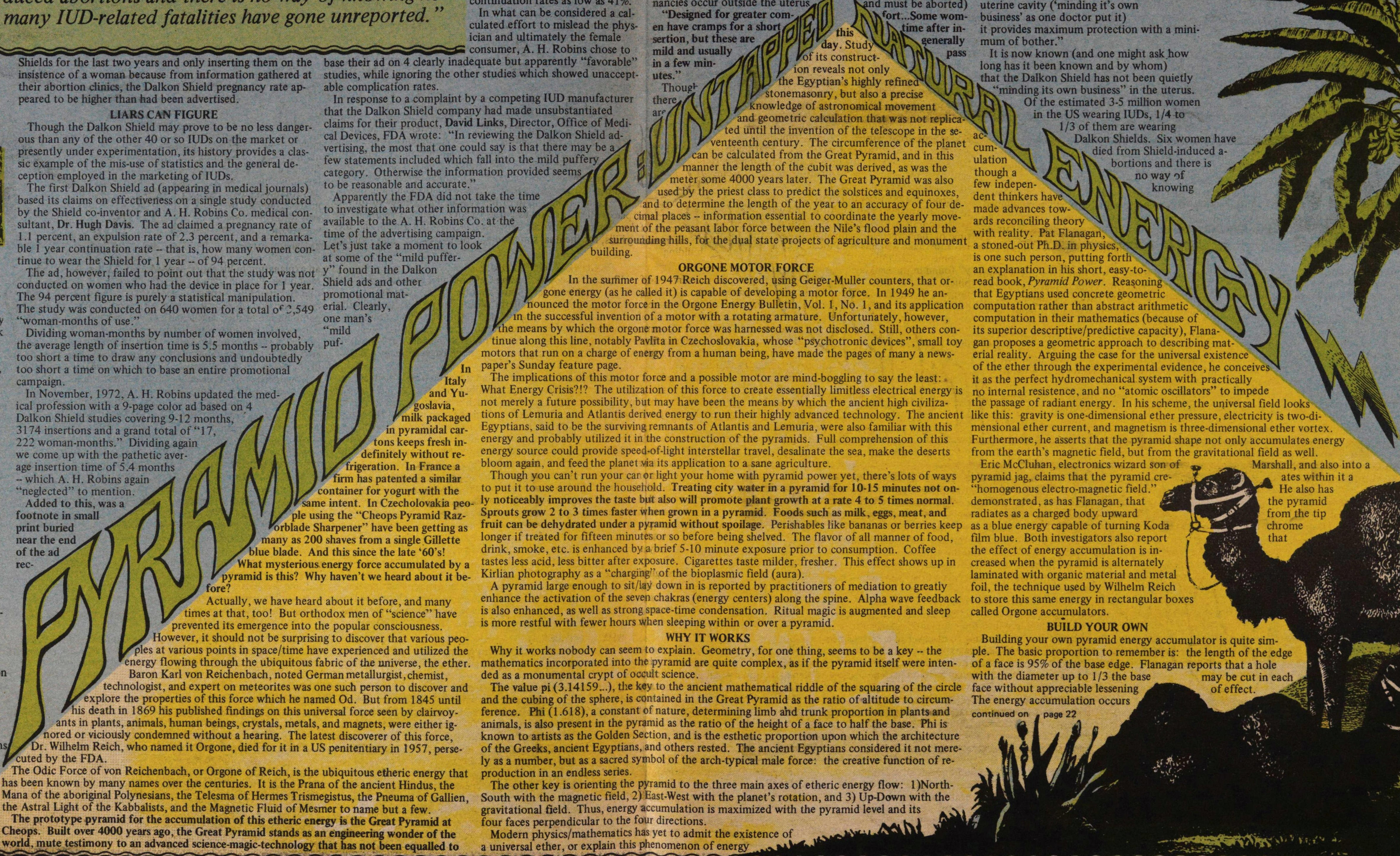 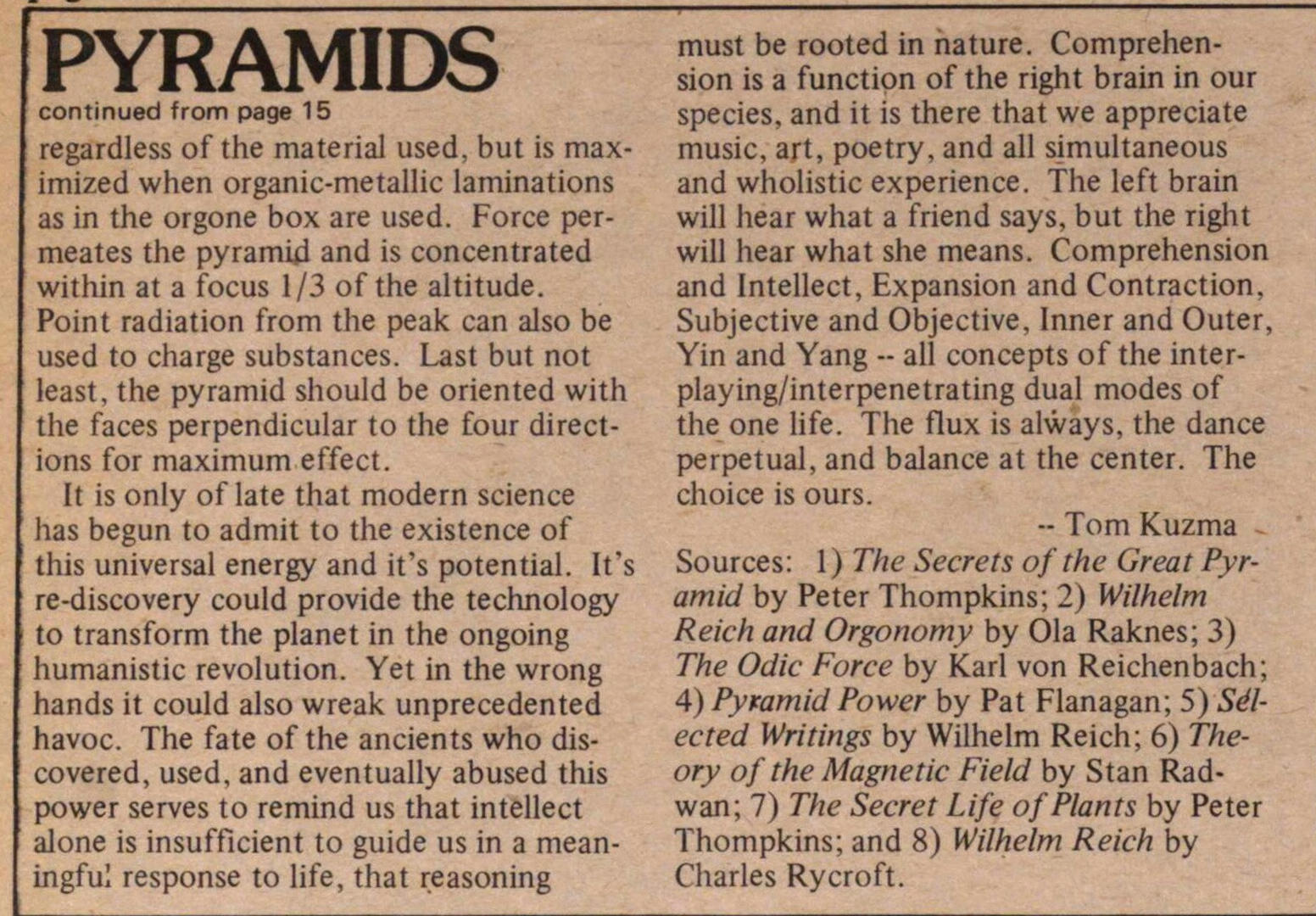 In Italy and Yugoslavia, milk packaged in pyramidal cartons keeps fresh indefinitely without refrigeration. In France, a firm has patented a similar container for yogurt with the same intent. In Czechoslovakia, people using the "Cheops Pyramid Razerblade Sharpener" have been getting as many as 200 shaves from a single Gillette blue blade. And this since the late '60s! What mysterious energy force accumulated by a pyramid is this? Why haven't we heard about it before?

Actually, we have heard about it before, and many times at that, too! But orthodox men of "science" have prevented its emergence into the popular consciousness.  However, it should not be surprising to discover that various people at various points in space/time have experienced and utilized the energy flowing through the ubiquitous fabric of the universe, the ether.

Baron Karl von Reichenbach noted German metallurgist, chemist, and expert on meteorites was one such person to discover and explore the properties of this force which he named Od. But from 1845 until his death in 1869 his published findings on this universal force seen by clairvoyant plants, animals, human beings, crystals, metals, and magnets, were either ignored or viciously condemned without a hearing. The latest discoverer of this force, Dr. Wilhelm Reich, who named it Orgone, died for it in a US penitentiary in 1957 persecuted by the FDA.

The Odie Force of von Reichenbach, or Orgone of Reich, is the ubiquitous etheric energy that has been known by many names over the centuries. It is the Prana of the ancient Hindus, the Mana of the aboriginal Polynesians, the Telesma of Hermes Trismegistus, the Pneuma of Gallien, the Astral Light of the Kabbalists, and the Magnetic Fluid of Mesmer to name but a few.

The prototype pyramid for the accumulation of this etheric energy is the Great Pyramid at Cheops. Built over 4,000 years ago, the Great Pyramid stands as an engineering wonder of the world, mute testimony to an advanced science-magic technology that has not been equaled to this day. Study of its construction reveals not only the Egyptians highly refined Stonemasonry but also a precise knowledge of astronomical movement and geometry calculation that was not replicated until the invention of the telescope in the seventeenth century. The circumference of the planet can be calculated from the Great Pyramid, and in this manner, the length of the cubit was derived as was the meter some 4000 years later. The Great Pyramid was also used by the priest class to predict the solstices and equinoxes,  and to determine the length of the year to an accuracy of four decimal places -- information essential to coordínate the yearly movement of the peasant labor force between the Nile's flood plain and the surrounding hills, for the dual state projects of agriculture and monument building

In the summer of 1947 Reich discovered, using Geiger-Muller counters, that orgone energy as he called it) is capable of developing a motor force. In 1949 he announced the Motor force in the Orgone Energy Bulletin, Vol. 1, No. 1, and its application in the successful invention of a motor with a rotating armature. Unfortunately, however, the means by which orgone motor force was harnessed was not disclosed. Still, others continue along this line, notably Pavlita in Czechoslovakia, whose "psychotronic devices", small toy motors that run on a charge of energy from a human being, have made the pages of many a paper's Sunday feature page.

The implications of this motor force and a possible motor are mind-boggling to say the least: What Energy Crisis?!? The utilization of this force to create essentially limitless electrical energy is not merely a future possibility but may have been the means by which the ancient high civilizations of Lemuria and Atlantis derived energy to run their highly advanced technology. The ancient Egyptians. said to be the surviving remnants of Atlantis and Lemuria, were also familiar with this energy and probably utilized it in the construction of the pyramids. Full comprehension of this energy source could provide speed-of-light interstellar travel, desalíñate the sea, make the deserts bloom again, and feed the planet via its application to a sane agriculture.

Though you can't run your car or light your home with pyramid power yet, there's lots of ways to put it to use around the household. Treating city water in a pyramid for 10-15 minutes not only noticeably improves the taste but also will promote plant growth at a rate 4 to 5 times normal. Sprouts grow 2 to 3 times faster when grown in a pyramid. Foods such as milk, eggs, meat, and fruit can be dehydrated under a pyramid without spoilage. Perishables like bananas or berries keep longer if treated for fifteen minutes or so before being shelved. The flavor of all manner of food, drink, smoke, etc. is enhanced by a brief 5-10 minute exposure prior to consumption. Coffee tastes less acid, less bitter after exposure. Cigarettes taste milder, fresher. This effect shows up in Kirlian photography as a "charging' of the bioplasmic field (aura).

A pyramid large enough to sit/lay down in is reported by practitioners of meditation to greatly enhance the activation of the seven chakras (energy centers) along the spine. Alpha wave feedback is also enhanced, as well as strong space-time condensation. Ritual magic is augmented and sleep is more restful with fewer hours when sleeping within or over a pyramid.

Why it works nobody can seem to explain. Geometry, for one thing, seems to be a key -- the mathematics incorporated into the pyramid are quite complex, as if the pyramid itself were intended as a monumental crypt of occult science.

The value pi (3.14159...), the key to the ancient mathematical riddle of the squaring of the circle and the cubing of the sphere, is contained in the Great Pyramid as the ratio of altitude to circumference. Phi (1 .618), a constant of nature, determining limb and trunk proportion in plants and animals, is also present in the pyramid as the ratio of the height of a face to half the base. Phi is known to artists as the Golden Section and is the esthetic proportion upon which the architecture of the Greeks, ancient Egyptians, and others rested. The ancient Egyptians considered it not merely as a number, but as a sacred symbol of the arch-typical male force: the creative function of reproduction in an endless series.

The other key is orienting the pyramid to the three main axes of etheric energy flow: 1 )North-South with the magnetic field, 2) East-West with the planet's rotation, and 3) Up-Down with the gravitational field. Thus, energy accumulation is maximized with the pyramid level and its four faces perpendicular to the four directions.

Modern physics-mathematics has yet to admit the existence of a universal ether, or explain this phenomenon of energy accumulation though a few independent thinkers have made advances towards reconciling theory with reality. Pat Flanagan, a stoned-out Ph.D. in physics is one such person, putting forth an explanation in his short, easy-to-read book, Pyramid Power. Reasoning that Egyptians used concrete geometric computation rather than abstract arithmetic computation in their mathematics (because of its superior descriptive/predictive capacity), Flanagan proposes a geometric approach to describing material reality. Arguing the case for the universal existence of the ether through the experimental evidence, he conceives it as the perfect hydromechanical system with practically no internal resistance, and no "atomic oscillators" to impede the passage of radiant energy. In his scheme, the universal field looks like this: gravity is one-dimensional ether pressure, electricity is two-dimensional ether current, and magnetism is three-dimensional ether vortex. Furthermore, he asserts that the pyramid shape not only accumulates energy from the earth's magnetic field but from the gravitational field as well.

Eric McCluhan, electronics wizard son of Marshall and also a pyramid jag, claims that the pyramid creates from within it a "homogenous electromagnetic field." He also has demonstrated, as has Flanagan, that the pyramid radiates as a charged body upward as blue energy capable of turning Kodachrome film blue. Both investigators also report the effect of energy accumulation is increased when the pyramid is alternately laminated with organic material and metal foil, the technique used by Wilhelm Reich to store this same energy in rectangular boxes called Orgone accumulators.

Building your own pyramid energy accumulator is quite simple. The basic proportion to remember is: the length of the edge of a face is 95% of the base edge. Flanagan reports that a hole with the diameter up to 1/3 the base may be cut in each face without appreciable lessening of effect.

The energy accumulation occurs regardless of the material used but is maximized when organic-metallic laminations as in the orgone box are used. Force permeates the pyramid and is concentrated within at a focus 1/3 of the altitude. Point radiation from the peak can also be used to charge substances. Last but not least, the pyramid should be oriented with the faces perpendicular to the four directions for maximum effect.

It is only of late that modern science has begun to admit to the existence of this universal energy and its potential. Its re-discovery could provide the technology to transform the planet in the ongoing humanistic revolution. Yet in the wrong hands, it could also wreak unprecedented havoc. The fate of the ancients who discovered, used, and eventually abused this power serves to remind us that intellect alone is insufficient to guide us in a meaningful response to life, that reasoning must be rooted in nature. Comprehension is a function of the right brain in our species, and it is there that we appreciate music, art, poetry, and all simultaneous and wholistic experience. The left brain will hear what a friend says, but the right will hear what she means. Comprehension and Intellect, Expansion and Contraction. Subjective and Objective, Inner and Outer, Yin and Yang -- all concepts of the interplaying interpenetrating dual modes of the one life. The flux is always, the dance perpetual, and balance at the center. The choice is ours. Tom Kuzma