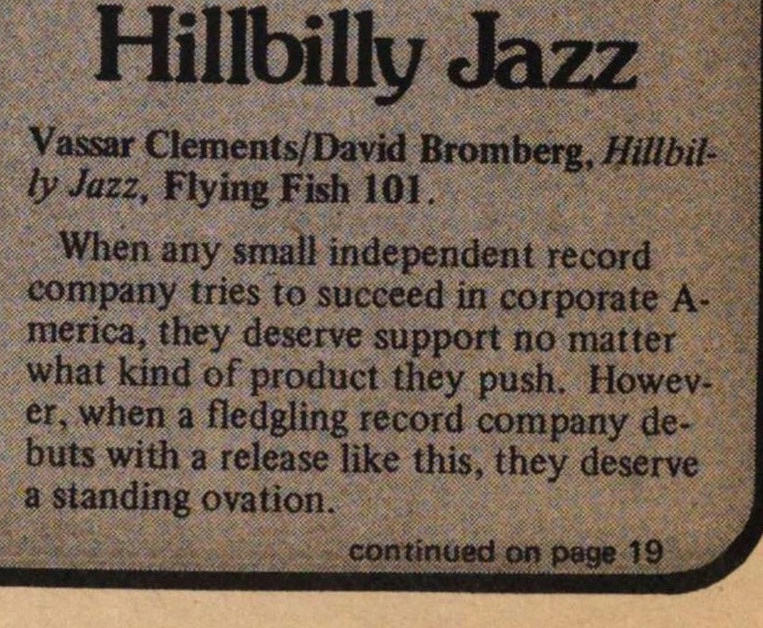 Flying Fish Records, a small operation out of Chicago, has put together this two record set of Hillbilly Jazz in the finest tradition of faithfulness to a style of music from another era. First, this album contains a real cross-section of material from the thirties and forties. Composers such as Bob Wills, Benny Goodman, Duke Ellington, and Steve Allen are all represented. Second, the performers have added some original material which, although written this year, shows they have learned from and appreciate their predecessors. Third, the performers are top-notch. Vassar Clements and David Bromberg are the two big names here, but everyone on this session is great. Fourth, this album is superbly produced and engineered, unusual for some small record companies.

Vassar Clements is billed as the "featured" star and clearly the violin (sometimes viola) is always prominent. Vassar, being one of the finest hillbilly or jazz fiddlers alive, is always a joy to listen to, and, although he sings on a few cuts, this is a predominantly instrumental album. Bromberg never sings a note, but his guitar playing is some of the best he's ever done. He always seems to know just when to lay back and just when to let his showmanship take over. He kicks off side two with a guitar intro similar to the way he starts the first cut on his own second album, Demon in Disguise, but switches to a weeping slide guitar solo after the second chorus of ''Sentimental Journey" that has to bristle the hair on your neck.

"Hillbilly Jazz" refers to the name given in the thirties and forties to the swing music being played by fiddle-guitar bands like Bob Wills and the Texas Playboys at the same time that Ellington and Basie were playing jazz with big bands featuring horns and reeds.

There is some "country-sounding"' music on this album, but essentially this is swing jazz at its finest without using a single instrument that you have to blow into.

"Cherokee," on side two, is a cut musically tight enough to make any jazz band proud, It features solos by Clements' fiddle and Bromberg's guitar, but neither rests during the other's solos. They are both right there providing tasty fills during each other's cooking solos. In fact, this whole album is so tight instrumentally that you'd think they had been playing as an ensemble for years.

I hesitate to highlight certain cuts on this LP because in 24 songs, there isn't a weak cut, not one! This is just simply an hour-and-a-quarter of the best of swing music, but it is in no way nostalgia. It's as fresh and new as this record company. By the way, the next release from Flying Fish Records is scheduled to be the new Norman Blake album. Support this label and keep this music coming!!