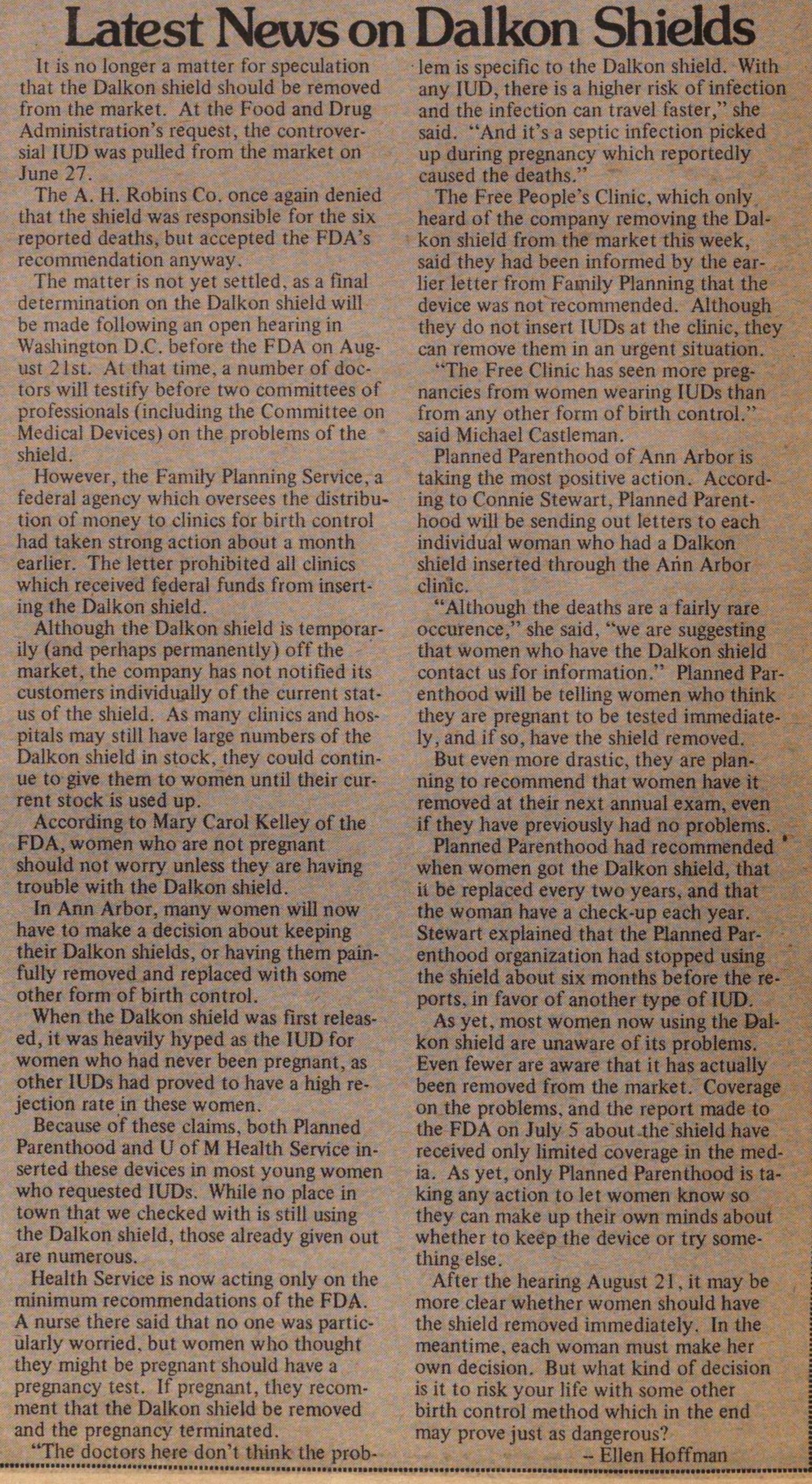 It is no longer a matter for speculation that the Dalkon shield should be removed from the market. At the Food and Drug Administration's request, the controversial IUD was pulled from the market on June 27.

The A. H. Robins Co. once again denied that the shield was responsible for the six reported deaths, but accepted the FDA's recommendation anyway.

The matter is not yet settled, as a final determination on the Dalkon shield will be made following an open hearing in Washington D.C. before the FDA on August 21st. At that time, a number of doctors will testify before two committees of professionals (including the Committee on Medical Devices) on the problems of the shield.

However, the Family Planning Service, a federal agency which oversees the distribution of money to clinics for birth control had taken strong action about a month earlier. The letter prohibited all clinics which received federal funds from inserting the Dalkon shield.

Although the Dalkon shield is temporarily (and perhaps permanently) off the market, the company has not notified its customers individually of the current status of the shield. As many clinics and hospitals may still have large numbers of the Dalkon shield in stock, they could continue to give them to women until their current stock is used up.

According to Mary Carol Kelley of the FDA, women who are not pregnant should not worry unless they are having trouble with the Dalkon shield.

In Ann Arbor, many women will now have to make a decision about keeping their Dalkon shields, or having them painfully removed and replaced with some other form of birth control.

When the Dalkon shield was first released, it was heavily hyped as the IUD for women who had never been pregnant, as other IUDs had proved to have a high rejection rate in these women.

Because of these claims, both Planned Parenthood and U of M Health Service inserted these devices in most young women who requested IUDs. While no place in town that we checked with is still using the Dalkon shield, those already given out are numerous.

Health Service is now acting only on the minimum recommendations of the FDA. A nurse there said that no one was particularly worried, but women who thought they might be pregnant should have a pregnancy test. If pregnant, they recommend that the Dalkon shield be removed and the pregnancy terminated.

"The doctors here don't think the problem is specific to the Dalkon shield. With any IUD, there is a higher risk of infection and the infection can travel faster," she said. "And it's a septic infection picked up during pregnancy which reportedly caused the deaths."

The Free People's Clinic, which only heard of the company removing the Dalkon shield from the market this week, said they had been informed by the earlier letter from Family Planning that the device was not recommended. Although they do not insert IUDs at the clinic, they can remove them in an urgent situation.

"The Free Clinic has seen more pregnancies from women wearing IUDs than from any other form of birth control." said Michael Castleman.

Planned Parenthood of Ann Arbor is taking the most positive action. According to Connie Stewart, Planned Parenthood will be sending out letters to each individual woman who had a Dalkon shield inserted through the Arm Arbor clinic.

"Although the deaths are a fairly rare occurrence," she said, "we are suggesting that women who have the Dalkon shield contact us for information." Planned Parenthood will be telling women who think they are pregnant to be tested immediately, and if so, have the shield removed.

But even more drastic, they are planning to recommend that women have it removed at their next annual exam, even if they have previously had no problems.

Planned Parenthood had recommended when women got the Dalkon shield, that it be replaced every two years, and that the woman have a check-up each year. Stewart explained that the Planned Parenthood organization had stopped using the shield about six months before the reports, in favor of another type of IUD.

As yet, most women now using the Dalkon shield are unaware of its problems. Even fewer are aware that it has actually been removed from the market. Coverage on the problems, and the report made to the FDA on July 5 about the shield have received only limited coverage in the media. As yet, only Planned Parenthood is taking any action to let women know so they can make up their own minds about whether to keep the device or try something else.

After the hearing August 21, it may be more clear whether women should have the shield removed immediately. In the meantime, each woman must make her own decision. But what kind of decision is it to risk your life with some other birth control method which in the end may prove just as dangerous?