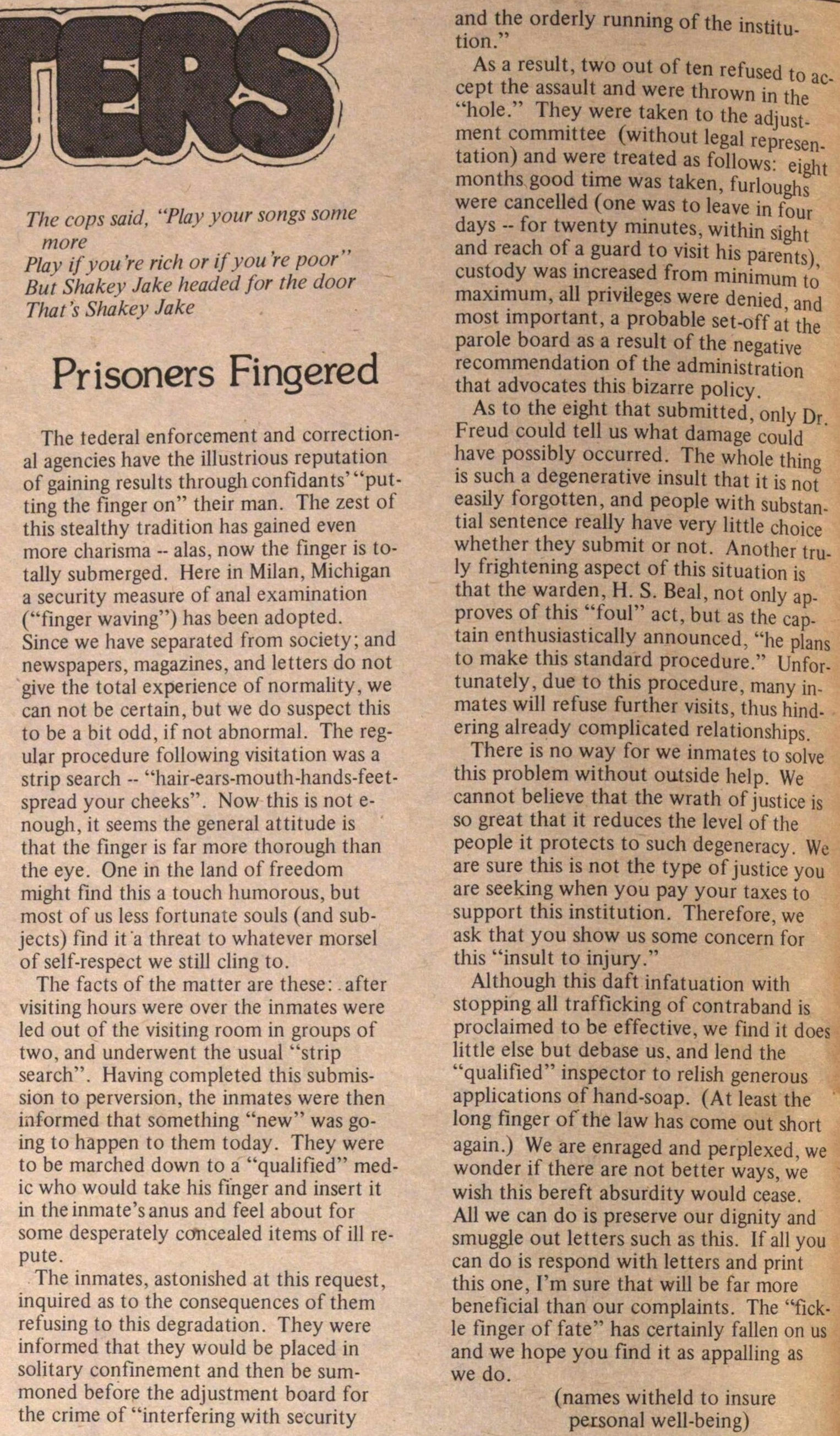 The federal enforcement and correctional agencies have the illustrious reputation of gaining results through confidants' "putting the finger on" their man. The zest of this stealthy tradition has gained even more charisma - alas, now the finger is totally submerged. Here in Milan, Michigan a security measure of anal examination ("finger waving") has been adopted. Since we have separated from society; and newspapers, magazines, and letters do not give the total experience of normality, we can not be certain, but we do suspect this to be a bit odd, if not abnormal. The regular procedure following visitation was a strip search -- "hair-ears-mouth-hands-feet-spread your cheeks". Now this is not enough, it seems the general attitude is that the finger is far more thorough than the eye. One in the land of freedom might find this a touch humorous, but most of us less fortúnate souls (and subjects) find it a threat to whatever morsel of self-respect we still cling to.

The facts of the matter are these: after visiting hours were over the inmates were led out of the visiting room in groups of two, and underwent the usual "strip search". Having completed this submission to perversion, the inmates were then informed that something "new" was going to happen to them today. They were to be marched down to a "qualified" medic who would take his finger and insert it in the inmate's anus and feel about for some desperately concealed items of ill repute.

The inmates, astonished at this request, inquired as to the consequences of them refusing to this degradation. They were informed that they would be placed in solitary confinement and then be summoned before the adjustment board for the crime of "interfering with security and the orderly running of the institution."

As a result, two out of ten refused to accept the assault and were thrown in the "hole." They were taken to the adjustment committee (without legal representation) and were treated as follows: eight months good time was taken, furloughs were cancelled (one was to leave in four days -- for twenty minutes, within sight and reach of a guard to visit his parents), custody was increased from minimum to maximum, all privileges were denied and most important, a probable set-off at the parole board as a result of the negative recommendation of the administration that advocates this bizarre policy.

As to the eight that submitted, only Dr. Freud could tell us what damage could have possibly occurred. The whole thing is such a degenerative insult that it is not easily forgotten, and people with substantial sentence really have very little choice whether they submit or not. Another truly frightening aspect of this situation is that the warden, H. S. Beal, not only approves of this "foul" act, but as the captain enthusiastically announced, "he plans to make this standard procedure." Unfortunately, due to this procedure, many inmates will refuse further visits, thus hindering already complicated relationships.

There is no way for we inmates to solve this problem without outside help. We cannot believe that the wrath of justice is so great that it reduces the level of the people it protects to such degeneracy. We are sure this is not the type of justice you are seeking when you pay your taxes to support this institution. Therefore, we ask that you show us some concern for this "insult to injury."

Although this daft infatuation with stopping all trafficking of contraband is proclaimed to be effective, we find it does little else but debase us, and lend the "qualified" inspector to relish generous applications of hand-soap. (At least the long finger of the law has come out short again.) We are enraged and perplexed, we wonder if there are not better ways, we wish this bereft absurdity would cease. All we can do is preserve our dignity and smuggle out letters such as this. If all you can do is respond with letters and print this one, I'm sure that will be far more beneficial than our complaints. The "fickIe finger of fate" has certainly fallen on us and we hope you find it as appalling as we do.