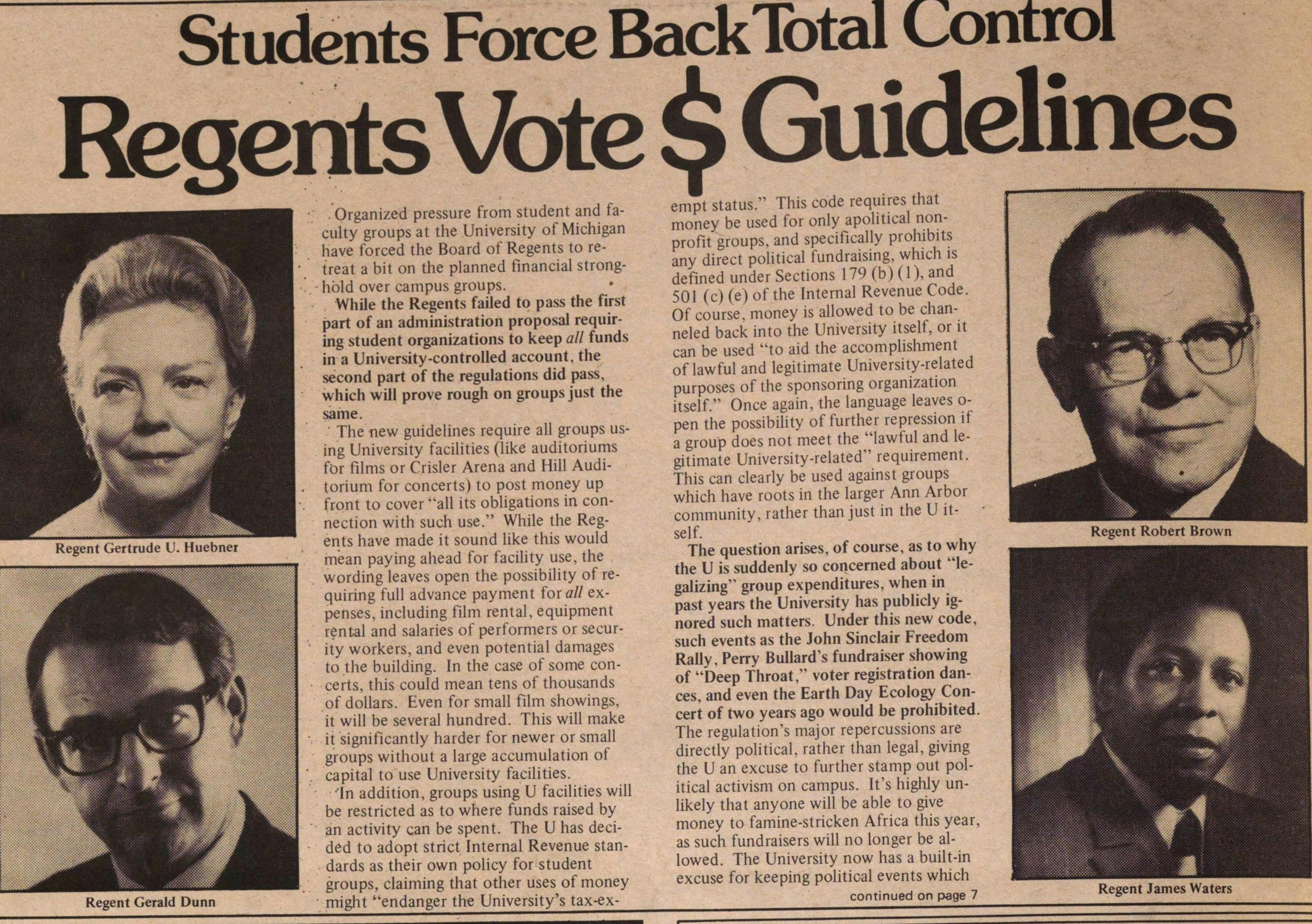 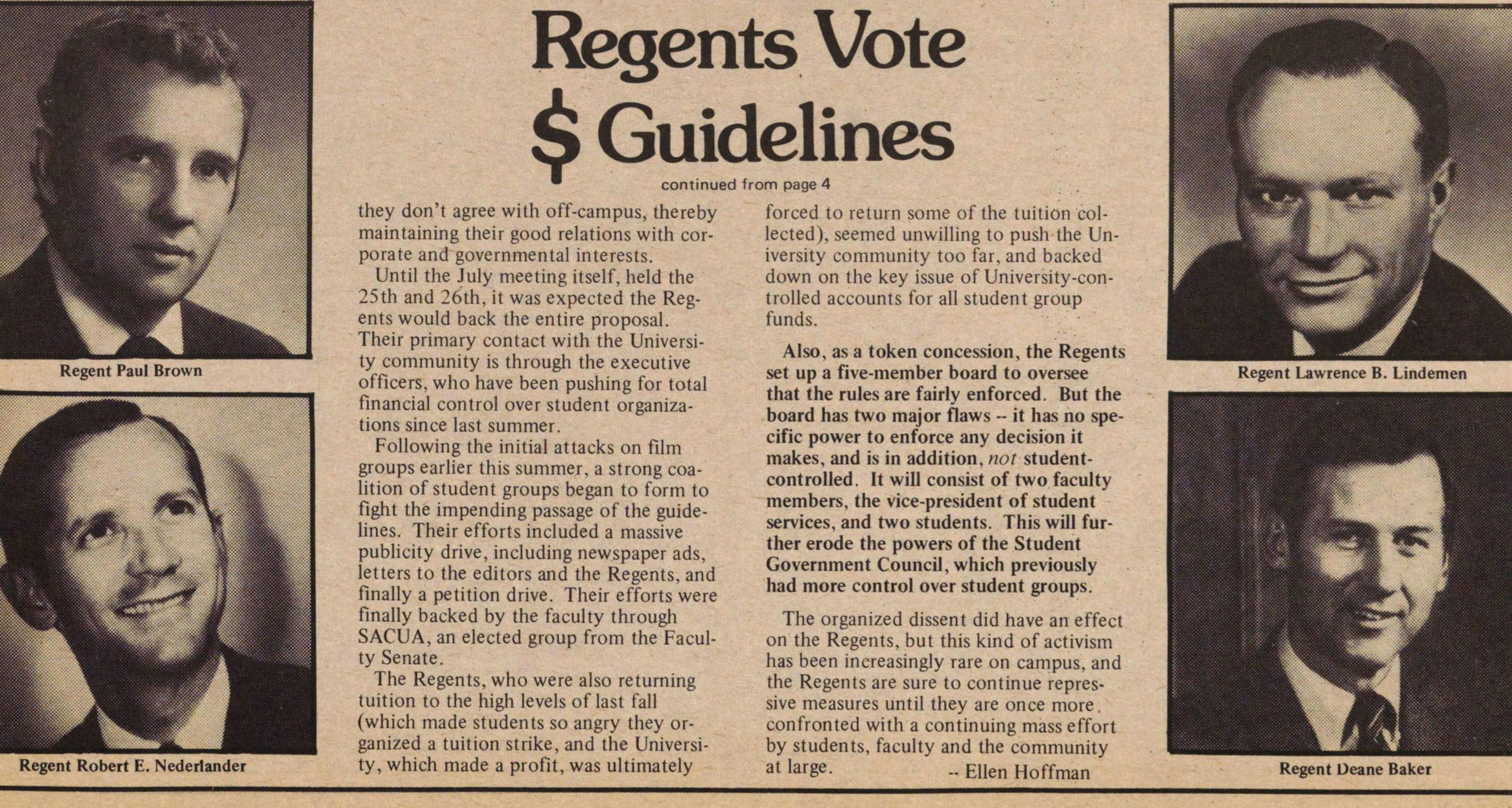 . Organized pressure from student and faculty groupsat the University of Michigan have forced the Board of Regents to retreat a bit on the planned financial stronghöld over campus groups. While the Regents failed to pass the first part of an administraron proposal requiring student organizations to keep all funds in a University-controlled account, the second part of the regulations did pass, which will prove rough on groups just the same. The new guidelines require all groups using University facilities (like auditoriums for films or Crisler Arena and Hill Auditorium for concerts) to post money up front to cover "all its obligations in connection with such use." While the Regents have made it sound like this would mean paying ahead for facility use, the wording leaves open the possibility of requiring full advance payment fora expenses, including film rental, equipment rental and salaries of performers or security workers, and even potential damages to the building. In the case of some concerts, this could mean tens of thousands of dollars. Even for small film showings, it will be several hundred. This will make it significantly harder for newer or small groups without a large accumulation of capital to use University facilities. In addition, groups using U facilities will be restricted as to where funds raised by an activity can be spent. The U has decided to adopt strict Internal Revenue standards as their own policy for student groups, claiming that o-ther uses of money might "endanger the University's empt status." This code requires tnat money be used for only apolitical nonprofit groups. and specifkally prohibits any direct political fundraising, which is defined under Sections 1 79 (b ) ( 1 ), and 501 (c) (e) of the Internal Revenue Code. Of course. money is allowed to be channeled back into the University itself, or ït can be used "to aid the accomplishment of lawful and legitímate University-related purposes of the sponsoring organization itself." Once again, the language leaves open the possibility of further repression if a group does not meet the "lawful and legitímate University-related" requirement. This can clearly be used against groups which have roots in the larger Ann Arbor community, rather than just in the U itself. The question arises, of course, as to why the U is suddenly so concerned about "legalizing" group expenditures, when in past years the University has publicly ignored such matters. Under this new code, such events as the John Sinclair Freedom Rally, Perry Bullard's fundraiser showing of "Deep Throat," voter registration dances, and even the Earth Day Ecology Concert of two years ago would be prohibited. The regulation's major repercussions are directly political, rather than legal, giving the U an excuse to further stamp out political activism on campus. It's highiy unlikely that anyone will be able to give money to famine-st rieken África this year, as such fundraisers will no longer be allowed. The University now has a built-in excuse for keeping political events which continued on page 7 Regents Vote Guidelines ' continued from page 4 they don't agree with off-campus, thereby maintaining their good relations with corporate and governmental interests. Until the July meeting itself, held the 25 th and 26th, it was expected the Regents would back the entire proposal. Their primary contact with the University community is through the executive officers, who have been pushing for total financial control over student organizations since last summer. Following the initial attacks on film groups earlier this summer, a strong coalition of student groups began to form to fight the impending passage of the guidelines. Their efforts included a massive publicity drive, including newspaper ads, letters to the editors and the Regents, and finally a petition drive. Their efforts were finally backed by the faculty through SACUA, an elected group from the Faculty Senate. The Regents, who were also returning tuition to the high levéis of last fall (which made students so angry they organized a tuition strike, and the University, which made a profit, was ultimately forced to return some of the tuition collected), seemed unwilling to push the University community too far, and backed down on the key issue of University-controlled accounts for all student group funds. Also, as a token concession, the Regents set up a five-member board to oversee that the rules are fairly enforced. But the board has two major flaws -- it has no specific power to enforce any decisión it makes, and is in addition, not studentcontrolled. It will consist of two faculty members, the vice-president of student services, and two students. This will further erode the powers of the Student Government Council, which previously had more control over student groups. The organized dissent did have an effect on the Regents, but this kind of activism has been increasingly rare on campus, and the Regents are sure to continue repressive measures until they are once more, confronted with a continuing mass effort by students, faculty and the community at large.