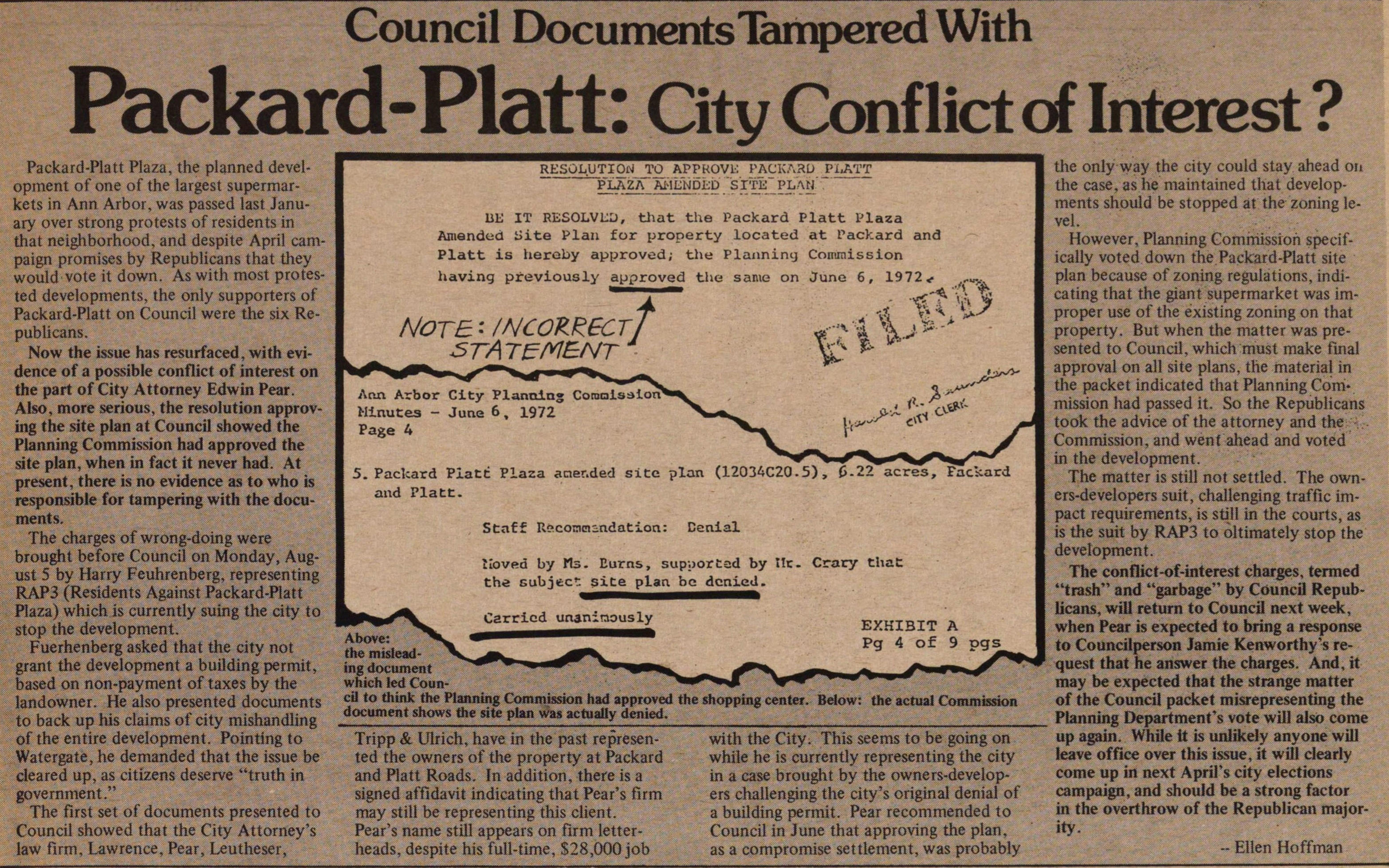 Packard-Platt Plaza, the planned development of one of the largest supermarkets in Ann Arbor, was passed last January over strong protests of residen ts in that neighborhood, and despite April campaign promises by Republicans that they would vote it down. As with most protested developments, the only supporters of Packard-Platt on Council were the six Republicans. Now the issue has resurfaced, with evidence of a possible conflict of interest on the part of City Attorney Edwin Pear. Also, more serious, the resolution approving the site plan at Council showed the Planning Commission had approved the site plan, when in fact it never had. At present, there is no evidence as to who is responsible for tampering with the documents. The charges of wrong-doing were brought before Council on Monday, August 5 by Harry Feuhrenberg, representing RAP3 (Residents Against Packard-Platt Plaza) which ís currently suing the city to stop the development. Fuerhenberg asked that the city not grant the development a building permit, based on non-payment of taxes by the landowner. He also presented documents to back up his claims of city mishandling of the entire development. Pointing to Watergate, he demanded that the issue be cleared up, as citizens deserve "truth in government." The first set of documents presented to Council showed that the City Attorney's law firm, Lawrence, Pear, Leutheser, Tripp & Ulrich, have in the past represented the owners of the property at Packard and Platt Roads. fn addition, there is a signed affidavit indicating that Pear's firm may still be representing this cliënt. Pear's name still appears on firm letterheads, despite his full-time, $28,000 job with the City. This seems to be going on while he is currently representing the city in a case brought by the owners-developers challenging the city's original denial of a building permit. Pear recommended to Council in June that approving the plan, as a compromise settlement, was probably the only way the city could stay ahead oit the case. as he maintained that developments should be stopped at the zoning level. However, Planning Comrriissioh specifically voted down the Packard-Platt site plan because of zoning regulations, indicating that the giant supermarket was improper use of the existing zoning on that property. But when the matter was presen ted to Council, which must make final approval on all site plans, the material in the packet indicated that Planning Commission had passed it. So the Republicans took the advice of the attorney and the Commission, and went ahead and voted in the development. The matter is still not settled. The owners-developers suit, challenging traffic impact requirements, is still in the courts, as is the suit by RAP3 to oltimately stop the development. The conflict-of-interest charges, termed "trash" and "garbage" by Council Republicans, wiü return to Council next week, when Pear is expected to bríng a response to Councilperson Jamie Kenworthy "s request that he answer the charges. And, it may be expected that the strange matter of the Council packet misrepresenting the _ Planning Department's vote will also come up again. While it is unlikely anyone will leave office over this issue, it will clearly come up in next April's city elections campaign, and should be a strong factor in the overthrow of the Republican majority. RKSOLUTIOri _TO APPKOVK PACKAJIO PÍATT PLAZA_ftLlENDKD SÍTEPLAN" IJK IT RESOLVUD, that the Packard Platt Plaza Amended Üite Plan for property located at Packard and Platt is heroby approved; the Planninij Commission having previously approved tlie same on June 6, 1972 „. I Ann Arbor City Planning CoraoisaloiN ? % Minutes - June 6 , 1972 X +- C&' 5. Packard Píate Plaza aner.ded site plan (12034C20.5) , 6-22 acres, Fackacd and Platt. StaEf R?comníndation: Denial lloved by Hs. Eurns, sup;orted by tic. Crary that tha Eubjtct: site plaa bc dcnied. ML Carriod unanlnously EXKIBIT A Above: S m Pg 4 of 9 pgs the .tW-- &+ whiched"counXT "' ' cil to think the Planning Commission had approved the shopping center. Below: the actual Commission document shows the site plan was actualiy denied.