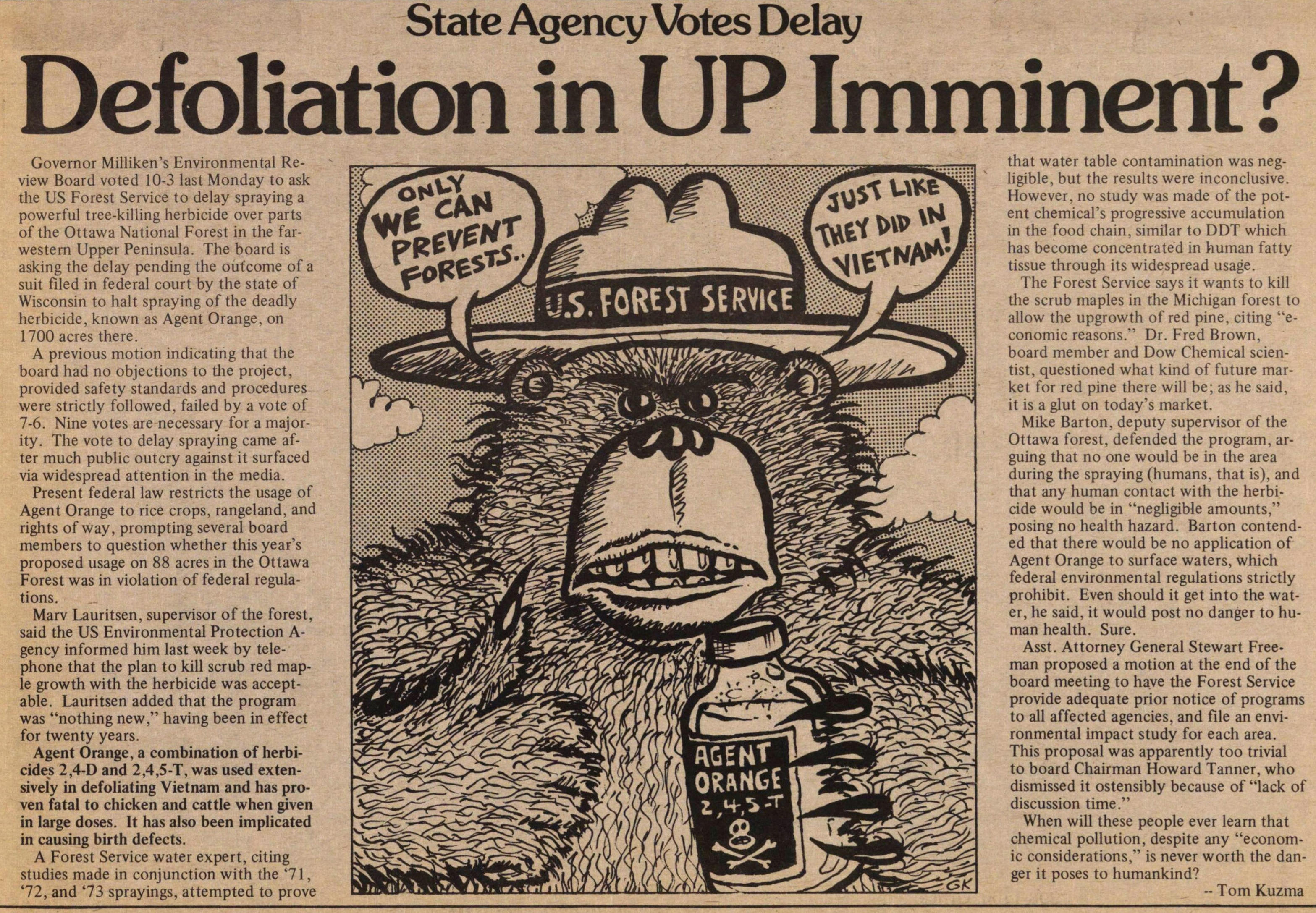 Governor Milliken's Environmental Review Board voted 10-3 last Monday to ask the US Forest Service to delay spraying a powerful tree-killing herbicide over parts of the Ottawa National Forest in the farwestern Upper Península. The board is asking the delay pending the oufcome of a suit filed in federal court by the state of Wisconsin to halt spraying of the deadly herbicide, known as Agent Orange, on 1700 acres there. A previous motion indicating that the board had no objections to the project, provided safety standards and procedures were strictly followed, failed by a vote of 7-6. Nine votes are necessary for a majority. The vote to delay spraying came after much public outcry against it surfaced via widespread attention in the media. Present federal law restricts the usage of Agent Orange to rice crops, rangeland, and rights of way, prompting several board members to question whether this year's proposed usage on 88 acres in the Ottawa Forest was in violation of federal regulations. Marv Lauritsen, supervisor of the forest, said the US Environmental Protection Agency informed him last week by telephone that the plan to kill scrub red mapIe growth with the herbicide was acceptable. Lauritsen added that the program was "nothing new," having been in effect for twenty years. Agent Orange, a combination of herbicides 2,4-D and 2,4,5-T, was used extensively in defoliating Vietnam and has proven fatal to chicken and cattle when given in large doses. It has also been implicated in causing birth defects. A Forest Service water expert, citing studies made in conjunction with the '71 , '72, and '73 sprayings, attempted to prove that water table contamination was negligible, but the results were inconclusive. However, no study was made of the potent chemical's progressive accumulation in the food chain, similar to DDT which has become concentrated in human fatty tissue through its widespread usage. The Forest Service says it wants to kill the scrub maples in the Michigan forest to allow the upgrowth of red pine, citing "economic reasons." Dr. Fred Brown, board member and Dow Chemical scientist, questioned what kind of future market for red pine there will be; as he said, it is a glut on today's market. Mike Barton, deputy supervisor of the Ottawa forest, defended the program, arguing that no one would be in the area during the spraying (humans. that is), and that any human contact with the herbicide would be in "negligible amounts," posing no health hazard. Barton contended that there would be no application of Agent Orange to surface waters, which federal environmental regulations strictly prohibit. Even should it get into the water, he said, it would post no danger to human health. Sure. Asst. Attorney General Stewart Freeman proposed a motion at the end of the board meeting to have the Forest Service provide adequate prior notice of programs to all affected agencies, and file an environmental impact study for each area. This proposal was apparently too trivial to board Chairman Howard Tanner, who dismissed it ostensibly because of "lack of discussion time." When will these people ever learn that chemical pollution, despite any "economie considerations," is never worth the danger it poses to humankind?