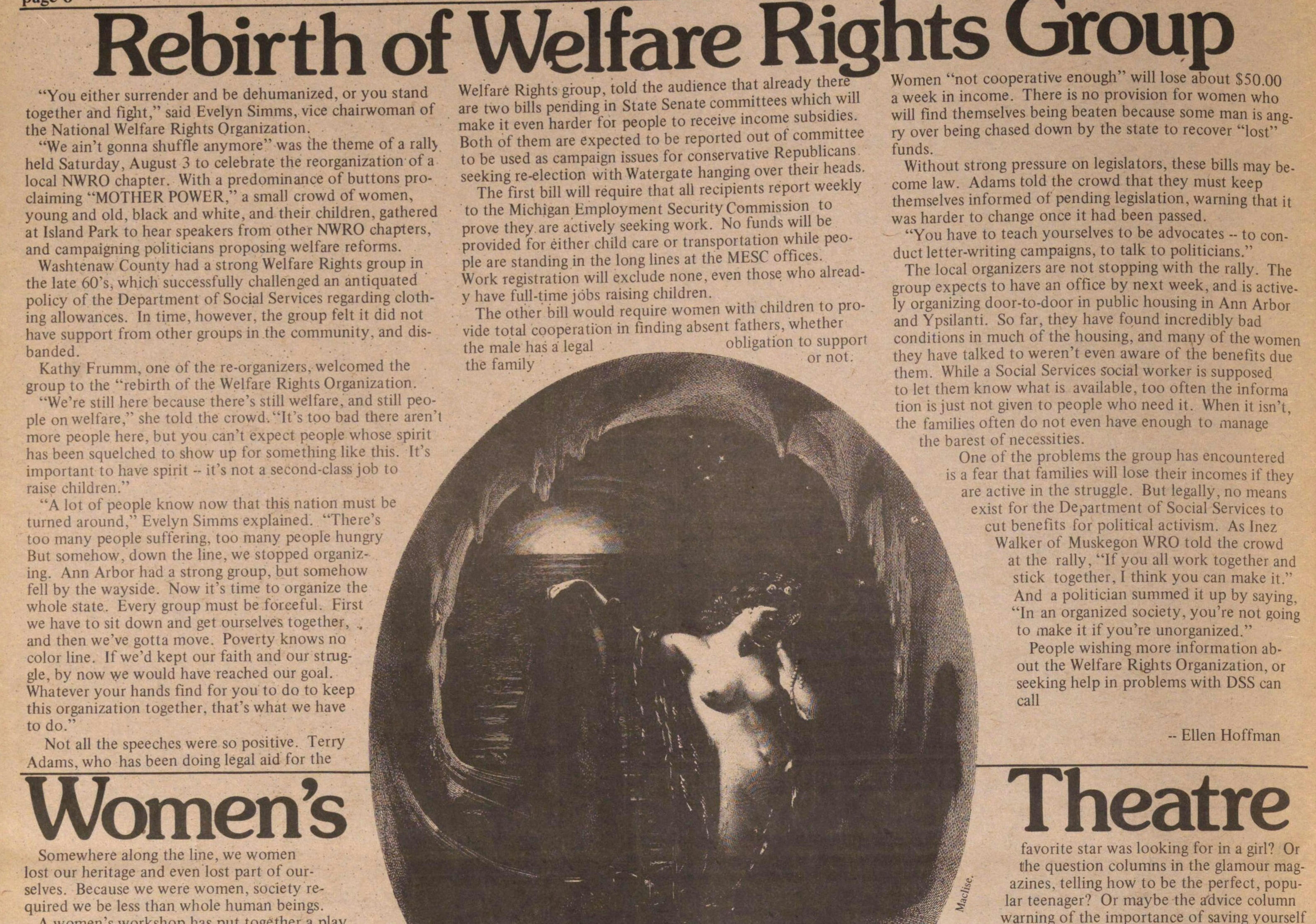 "You either surrender and be dehumanized, or you stand together and fight," said Evelyn Simms, vice chairwoman of the National Welfare Rights Organization. "We ain't gonna shuffle anymore" was the theme of a rally held Saturday, August 3 to celébrate the reorganizaron of a local NWRO chapter. With a predominance of buttons proclaiming "MOTHER POWER," a small crowd of women, young and old, black and white, and their children, gathered at Island Park to hear speakers from other NWRO chapters, and campaigning politicians proposing welfare reforms. Washtenaw County had a strong Welfare Rights group in the late 60's, which successfully challenged an antiquated policy of the Department of Social Services regarding clothing allowances. In time, liowever. the group feit it did not have support from other groups in the community. and disbanded. Kathy Frumm, one of the re-organizers, welcomed the group to the "rebirth of the Welfare Rights Organization. "We're still here because there's still welfare, and still people on welfare," she told the crowd."It's too bad there aren't more people here, but you can't expect people whose spirit has been squelched to show up for sometliing like this. It's important to nave spirit -■ ït s not a secona-ciass jod ie raise children." "A lot of people know now that this nation must be turned around," Evelyn Simms explained. "There's too many people suffering, too many people hungry But somehow, down the line, we stopped organizing. Ann Arbor had a strong group, but somehow feil by the wayside. Now it's time to organize the whole state. Every group must be foreeful. First we have to sit down and get ourselves together, .. and then we've gotta move. Poverty knows no color line. If we'd kept our faith and our stniggle, by now we would have reached our goal. Whatever your hands find for you to do to keep this organization together. that's what we have i to do." Not all the speeches were so positive. Terry Adams, who has been doing legal aid for the Weífare Rights group, told the audience that already tnere are two bilis pending in State Senate committees which will make it even harder tor people to receive income subsidies. Both of them are expected to be reported out of committee to be used as campaign issues for conservative Republicans seeking re-election with Watergate hanging over their neads. The first bill will require that all recipients report weekly to the Michigan Employment Security Commission to prove they.are actively seeking work. No funds will be provided for éither child care or transportation while people are standing in the long lines at the MESC offices. Work registration will exclude none, even those who already have full-time jobs raising children. " The other bill would require women with children to provide total cooperatibn in finding absent fathers, whether the male has á legal obligation to support thefamily ÊÊÊÊÊkW. ' Women not cooperauve cnuugn win lose aoout JMJ.UO a week in income. There is no provisión for women who will find themselves being beaten because some man is angry over being chased down by the state to recover "lost" funds. Without strong pressure on legislators, these bilis may become law. Adams told the crowd that they must keep themselves informed of pending legislation, warning that it was harder to change once it had been passed. "You have to teach yourselves to be advocates - to conduct letter-writing campaigns, to talk to politicians." The local organizers are not stopping with the rally. The group expects to have an office by next week, and is actively organizing door-to-door in public housing in Ann Arbor and Ypsilanti. So far, they have found incredibly bad conditions in much of the housing, and many of the women they have talked to weren't even aware of the benefits due them. While a Social Services social worker is supposed to let them know what is available, too often the informa tion is just not given to people who need it. When it isn't, the families often do not even have enough to manage the barest oí necessiues. One of the problems the group has encountered is a fear that families will lose their incomes if they __ _ _ _ - _ _ _ _ x_ _ _ v ■ ■ T are active in the struggle. But legally, no means exist for the Department of Social Services to cut benefits for political activism. As Inez Walker ot Muskegon WKU told the crowd at the rally, "If you all work together and stick together, I think you can make it." And a politician summed it up by saying, "In an organized society, you're not going to make it if you're unorganized." People wishing more informa tion about the Welfare Riglits Organization, or seeking help in problems with DSS can cali