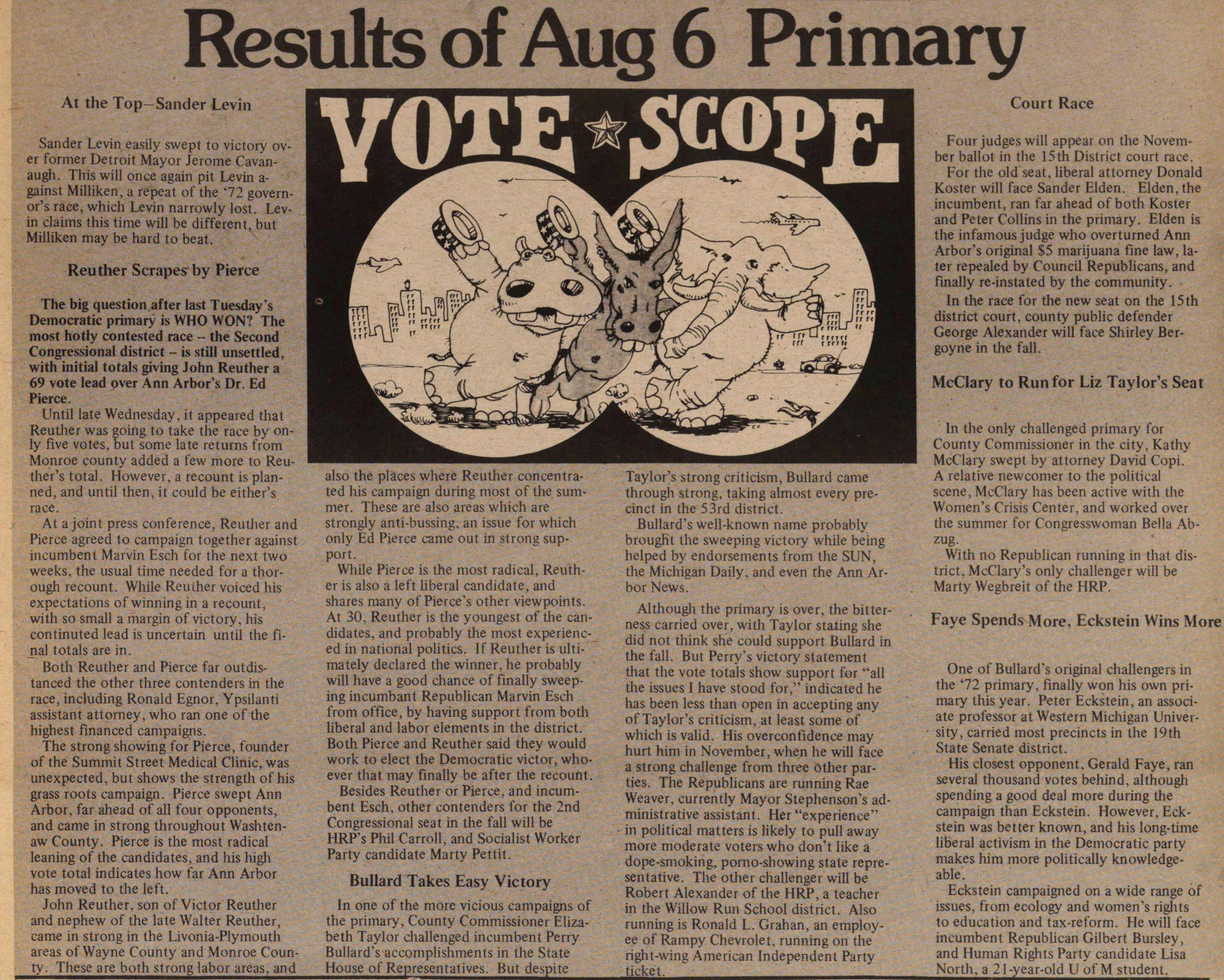 At the Top - Sander Levin

Sander Levin easily swept to victory over former Detroit Mayor Jerome Cavanaugh. This will once again pit Levin against Milliken, a repeat of the 72 governor's race, which Levin narrowly lost. Levin claims this time will be different, but Milliken may be hard to beat.

The big question after last Tuesday's Democratic primary is WHO WON? The most hotly contested race - the Second Congressional district - is still unsettled, with initial totals giving John Reuther a 69 vote lead over Ann Arbor's Dr. Ed Pierce.
Until late Wednesday, it appeared that Reuther was going to take the race by only five votes, but some late returns from Monroe county added a few more to Reuther's total. However, a recount is planned, and until then, it could be either's race.
At a joint press conference, Reuther and Pierce agreed to campaign together against incumbent Marvin Esch for the next two weeks, the usual time needed for a thorough recount. While Reuther voiced his expectations of winning in a recount, with so small a margin of victory, his continued lead is uncertain until the final totals are in.
Both Reuther and Pierce far outdistanced the other three contenders in the race, induding Ronald Egnor, Ypsilanti assistant attorney, who ran one of the highest financed campaigns.
The strong showing for Pierce, founder of the Summit Street Medical Clinic, was unexpected, but shows the strength of his grass roots campaign. Pierce swept Ann Arbor, far ahead of all four opponents, and came in strong throughout Washtenaw County. Pierce is the most radical leaning of the candidates, and his high vote total indicates how far Ann Arbor has moved to the left.
John Reuther, son of Víctor Reuther and nephew of the late Walter Reuther, came in strong in the Livonia-Plymouth areas of Wayne County and Monroe County. These are both strong labor areas, and also the places where Reuther concentrated his campaign during most of the summer. These are also areas which are strongly anti-bussing. an issue for which only Ed Pierce came out in strong support.
While Pierce is the most radical, Reuther is also a left liberal candidate, and shares many of Pierce's other viewpoints. At 30, Reuther is the youngest of the candidates, and probably the most experienced in national politics. If Reuther is ultimately declared the winner, he probably will have a good chance of fïnally sweeping incumbent Republican Marvin Esch from office, by having support from both liberal and labor elements in the district. Both Pierce and Reuther said they would work to elect the Democratic victor, whoever that may finally be after the recount.
Besides Reuther or Pierce, and incumbent Esch, other contenders for the 2nd Congressional seat in the fall will be HRP's Phil Carroll, and Socialist Worker Party candidate Marty Pettit.

In one of the more vicious campaigns of the primary, County Commissioner Elizabeth Taylor challenged incumbent Perry Bullard's accomplishments in the State House of Representatives. But despite Taylor's strong criticism, Bullard came through strong, taking almost every precinct in the 53rd district.
Bullard's well-known name probably brought the sweeping victory while being helped by endorsements from the SUN, the Michigan Daily, and even the Arm Arbor News.
Although the primary is over, the bitterness carried over, with Taylor stating she did not think she could support Bullard in the fall. But Perry's victory statement that the vote totals show support for "'all the issues I have stood for," indicated he has been less than open in accepting any of Taylor's criticism, at least some of which is valid. His overconfidence may hurt him in November, when he will face a strong challenge from three other parties. The Republicans are running Rae Weaver, currently Mayor Stephenson's administrative assistant. Her "experience" in political matters is likely to pull away more moderate voters who don't like a dope-smoking, porno-showing state representative. The other challenger will be Robert Alexander of the HRP, a teacher in the Willow Run School district. Also running is Ronald L. Grahan, an employee of Rampy Chevrolet, running on the right-wing American Independent Party ticket.

Four judges will appear on the November ballot in the 15th District court race.
For the old seat, liberal attorney Donald Koster will face Sander Elden.
Elden, the incumbent, ran far ahead of both Koster and Peter Collins in the primary. Elden is the infamous judge who overturned Ann Arbor's original $5 marijuana fine law, later repealed by Council Republicans, and finally re-instated by the community.
In the race for the new seat on the 15th district court, county public defender George Alexander will face Shirley Bergoyne in the fall.

In the only challenged primary for County Commissioner in the city, Kathy McClary swept by attorney David Copi. A relative newcomer to the political scene, McClary has been active with the Women's Crisis Center, and worked over the summer for Congresswoman Bella Abzug.
With no Republican running in that district. McClary's only challenger will be Marty Wegbreit of the HRP.

One of Bullard's original challengers in the '72 primary, finally won his own primary this year. Peter Eckstein, an associate professor at Western Michigan University, carried most precincts in the 19th State Senate district.
His closest opponent, Gerald Faye, ran several thousand votes behind, although spending a good deal more during the campaign than Eckstein. However, Eckstein was better known, and his long-time liberal activism in the Democratic party makes him more politically knowledgeable.
Eckstein campaigned on a wide range of issues, from ecology and women's rights to education and tax-reform.
He will face incumbent Republican Gilbert Bursley, and Human Rights Party candidate Lisa North. a 21-year-old U of M student.