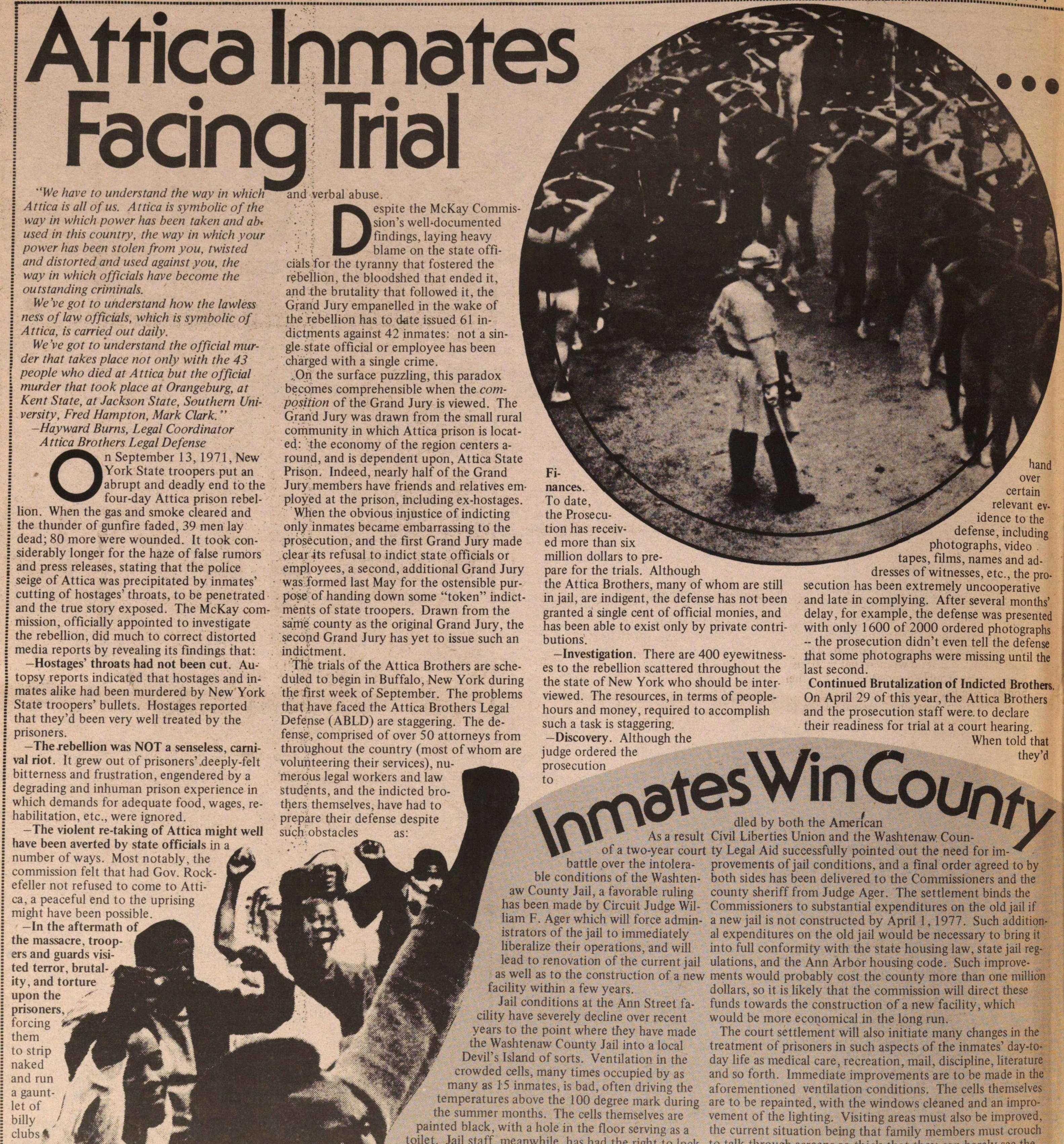 On September 13, 1971, New York State troopers put an abrupt and deadly end to the four-day Attica prison rebellion. When the gas and smoke cleared and the thunder of gunfire faded, 39 men lay dead; 80 more were wounded. It took considerably longer for the haze of false rumors and press releases, stating that the police seige of Attica was precipitated by inmates' cutting of hostages' throats, to be penetrated and the true story exposed. The McKay commission, officially appointed to investígate the rebellion, did much to correct distorted media reports by revealing its findings that:
- Hostages' throats had not been cut.
Autopsy reports indicated that hostages and inmates alike had been murdered by New York State troopers' bullets. Hostages reported that they'd been very well treated by the prisoners.
-The rebellion was NOT a senseless, carnival riot.
It grew out of prisoners' deeply-felt bitterness and frustration, engendered by a degrading and inhuman prison experience in which demands for adequate food, wages, rehabilitation, etc, were ignored.
-The violent re-taking of Attica might well have been averted by state officials in a number of ways. Most notably, the commission felt that had Gov. Rockefeller not refused to come to Attica, a peaceful end to the uprising might have been possible.
-In the aftermath of the massacre, troopers and guards visited terror, brutality. and torture upon the prisoners, forcing them to strip naked and run a gauntlet of billy clubs and verbal abuse.

Despite the McKay Commission's well-documented findings, laying heavy blame on the state officials for the tyranny that fostered the rebellion, the bloodshed that ended it, and the brutality that followed it, the Grand Jury empanelled in the wake of the rebellion has to date issued 61 indictments against 42 inmates: not a single state official or employee has been charged with a single crime.
On the surface puzzling, this paradox becomes comprehensible when the position of the Grand Jury is viewed. The Grand Jury was drawn from the small rural community in which Attica prison is located: the economy of the region centers around, and is dependent upon, Attica State Prison. Indeed, nearly half of the Grand Jury members have friends and relatives employed at the prison, including ex-hostages.
When the obvious injustice of indicting only inmates became embarrassing to the prosecution, and the first Grand Jury made clear its refusal to indict state officials or employees, a second, additional Grand Jury was formed last May for the ostensible purpose of handing down some "token" indictments of state troopers. Drawn from the same county as the original Grand Jury, the second Grand Jury has yet to issue such an indictment

The trials of the Attica Brothers are scheduled to begin in Buffalo, New York during the first week of September. The problems that have faced the Attica Brothers Legal Defense (ABLD) are staggering. The defense, comprised of over 50 attorneys from throughout the country (most of whom are volunteering their services), numerous legal workers and law students, and the indicted brothers themselves, have had to prepare their defense despite such obstacles as Finances. To date, the Prosecution has received more than six million dollars to prepare for the trials. Although the Attica Brothers, many of whom are still in jail, are indigent, the defense has not been granted a single cent of official monies, and has been able to exist only by private contributions.
-Investigation. There are 400 eyewitnesses to the rebellion scattered throughout the the state of New York who should be interviewed. The resources, in terms of people-hours and money, required to accomplish such a task is staggering.
-Discovery. Although the judge ordered the prosecution to hand over certain relevant evidence to the defense, including photographs, video tapes, films, names and addresses of witnesses, etc., the prosecution has been extremely uncooperative and late in complying. After several months delay, for example, the defense was presented with only 1600 of 2000 ordered photographs - the prosecution didn't even tell the defense that some photographs were missing until the last second.
Continued Brutalization of Indicted Brothers. On April 29 of this year, the Attica Brothers and the prosecution staff were to declare their readiness for trial at a court hearing. When told that they'd.....