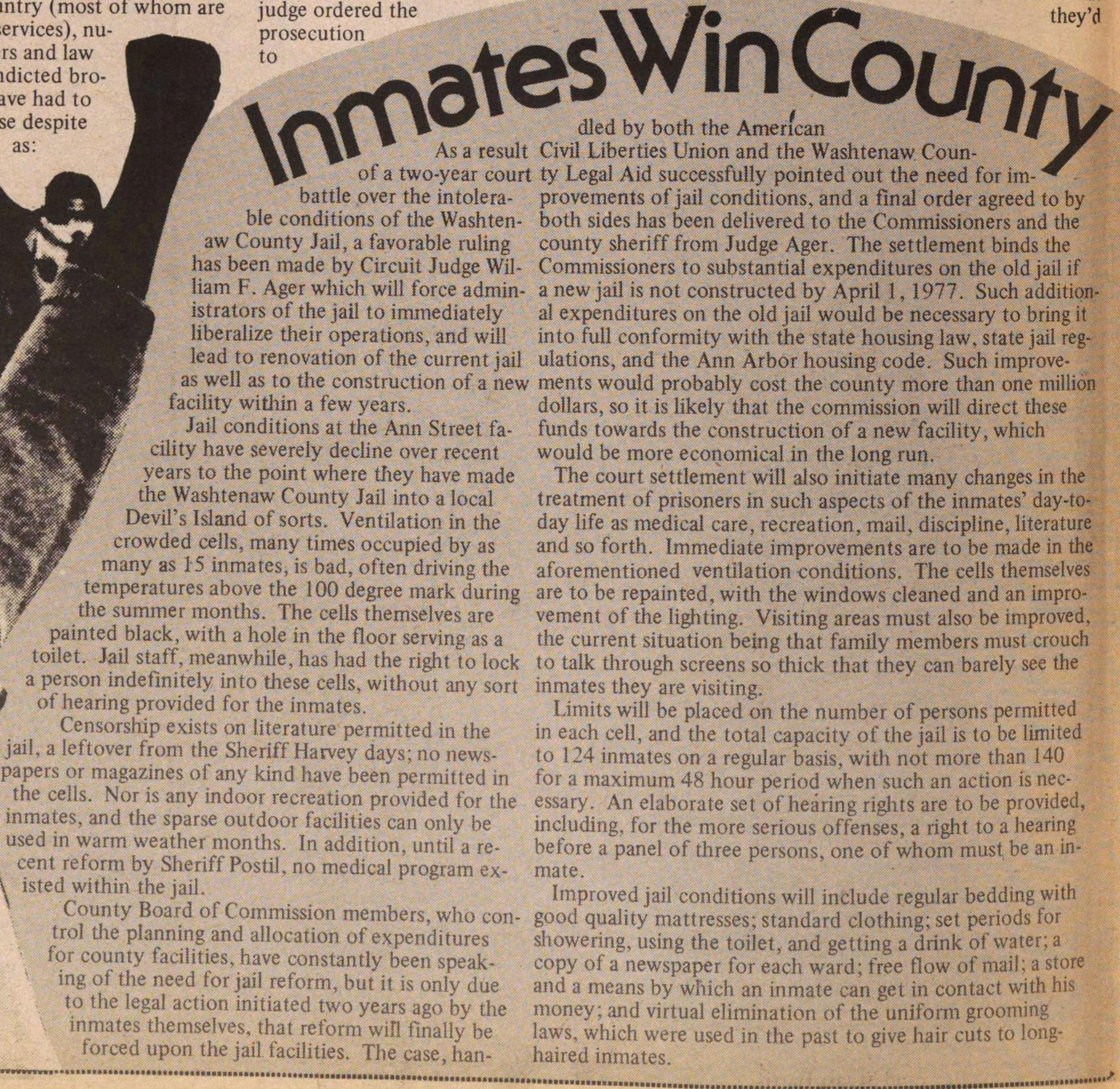 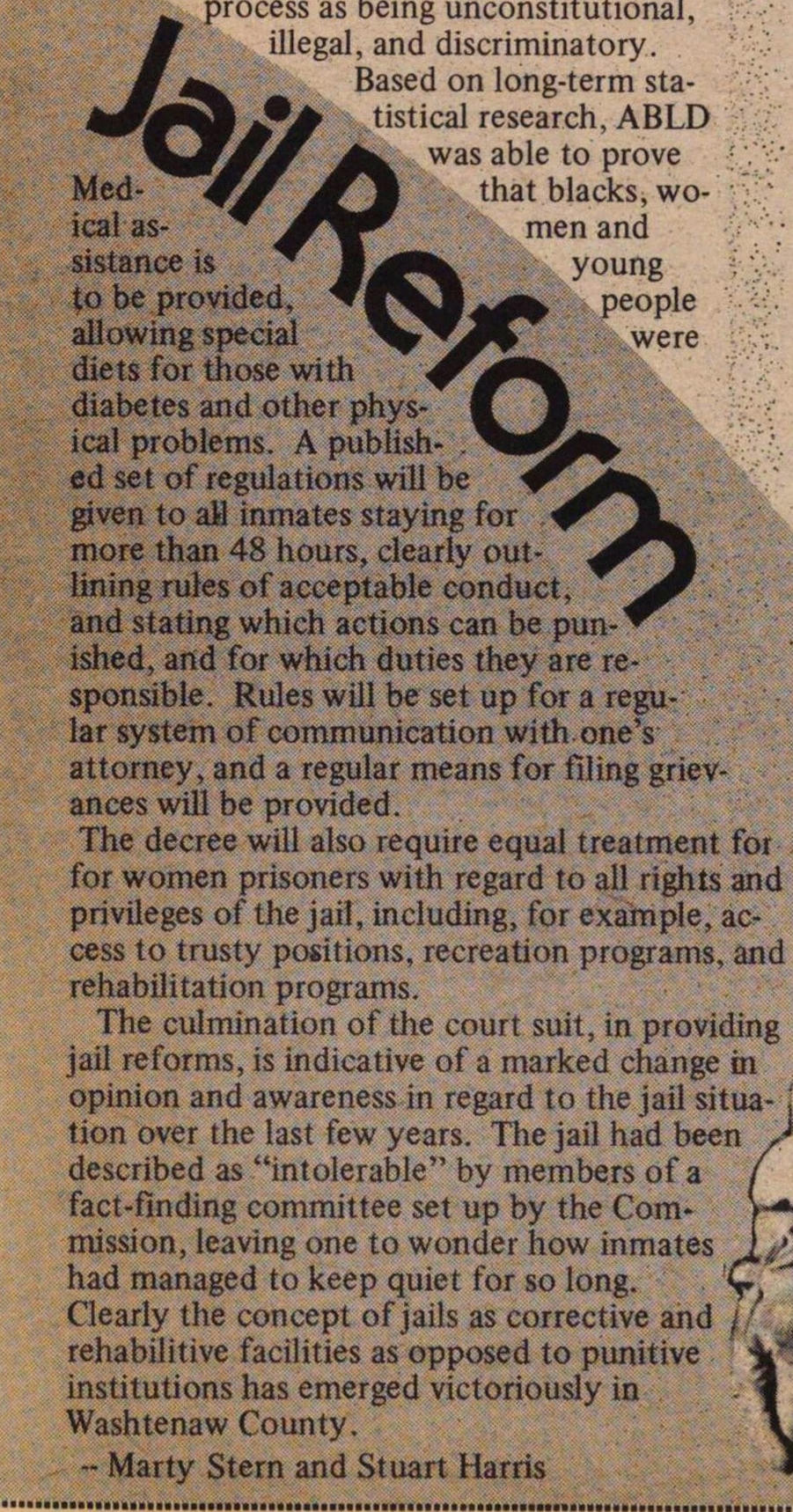 V I f 1 oí a two-year court oattie over the intolerable conditions of the Washtenaw County Jail, a favorable ruling has been made by Circuit Judge William F. Ager which will force administrators of the jail to immediately liberalize their operations, and will lead to renovation of the current jail as well as to the constmction of a new facility witliin a few years. Jail conditions at the Ann Street facility have severely decline over recent years to the point where they have made the Washtenaw County Jail into a local Devil's Island of sorts. Ventilation in the crowded cells, many times occupied by as many as 15 inmates, is bad, often driving the temperatures above the 100 degree mark during the summer months. The cells themselves are painted black, with a hole in the floor serving as a toilet. Jail staff, meanwhile, has had the right to lock a person indefinitely into these cells, without any sort of hearing provided for the inmates. Censorship exists on literature permitted in the jai!, a lettover trom the Sheriff Harvey days; no newspapers or magazines of any kind have been permitted in the cells. Nor is any indoor recreation provided for the inmates, and the sparse outdoor facilities can only be used in warm weather months. In addition, until a recent reform by Sheriff Postil, no medical program exy isted within the jail. County Board of Commission members, wlio control the planning and allocation of expenditures for county faciiities, have constantly been speaking of the need for jaii reform, but it is only due to the legal action initiated two years ago by the inmates themselves, that reform wifl finally be forced upon the jail faciiities. The case, ty Legal Aid successfully pointed out the need for provements of jail conditions, and a final order agreed to by both sides has been delivered to the Commissioners and the county sheriff from Judge Ager. The settlement binds the Commissioners to substantia! expenditures on the old jail if a new jail is not constructed by April 1 , 1977. Such additional expenditures on the old jail would be necessary to bring it into fuil conformity with the state housing law, state jail regulations, and the Ann Arbor housing code. Such improvements would probably cost the county more than one million dollars, so it is likely that the commission will direct these funds towards the construction of a new facility, which would be more economical in the long run. The court settlement will also initiate many changes in the treatment of prisoners in such aspects of the inmates' day-today life as medical care, recreation, mail, discipline, literature and so forth. Immediate improvements are to be made in the aforementioned ventilation conditions. The cells themselves are to be repainted, with the Windows cleaned and an improvement of the lighting. Visiting areas must also be itnproved, the current situation being that family members must crouch to talk through screens so thick that they can barely see the inmates they are visiting. Limits wiil be placed on the number of persons permitted in each cell, and the total capacity of the jail is to be lirnited to 124 inmates on a regular basis, with not more than 140 for a maximum 48 hour period when such an action is necessary. An elabórate set of hearing rights are to be provided, including, for the more serious offenses, a right to a hearing before a panel of three persons, one of whom must be an inmate. Improved jail conditions wil! include regular bedding with good quality mattresses; Standard clothing; set periods for showering, using the toilet, and getting a drink of water; a copy of a newspaper for each ward; free flow of mail; a store and a means by which an inmate can get in contact with his money; and virtual elimination of the uniform grooming laws, which were used in the past to give hair cuts to longhaired inmates. k A. k 'jr ro. w ? diabetes and other physical probiems. A publish ea set of reguiauons wul be i given to aH inmates staying for more than 4a hours, ciearly outfíning rules of acceptable conduct, and stating which actions can be pun ísnea, ano ior wmcn auties mey are responsible. Rules will be set up for a regular system of communication with one's attorney, and a regular means for filing grievances will be provided. The decree will also require equal treatrnent for for women prisoners with regard to all rights and privileges of the jail, including, for exaimple, access to trusty positions, recreation programs, and rehabilitation programs. The culmination of the court suit, in providing jail reforms, is indicative of a marked change in opinión and awareness in regard to the jail situa tion over the last few years. The jail had been described as "intolerable" by members of a tact-iinding committee set up by the Commission, leaving one to wonder how inmates had managed to keep quiet for so long. Clearly the concept of jaüs as corrective and rehabilitive facilities as opposed to punitive institutions has emerged victoriously in Washtenaw County.