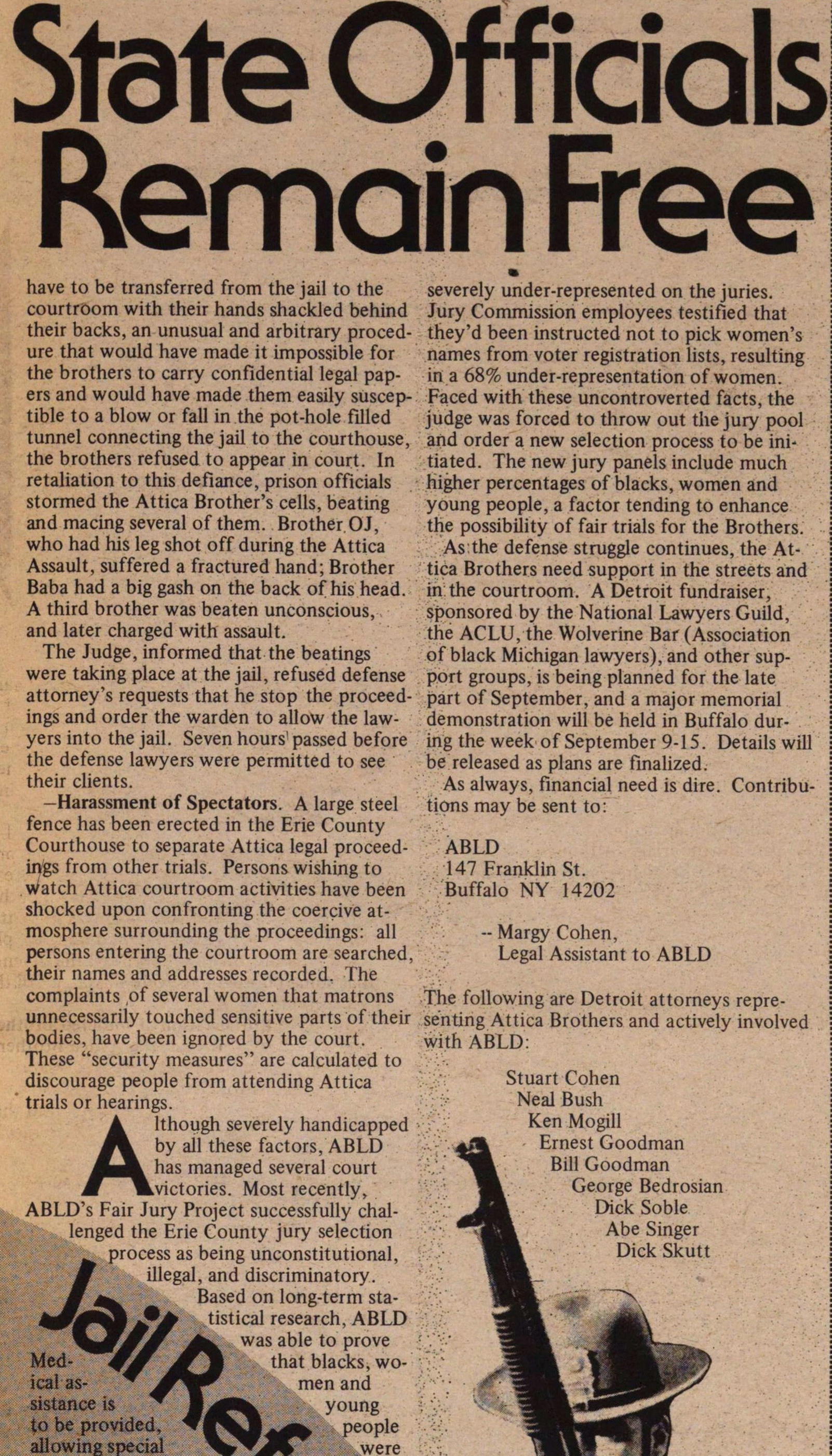 have to be transferred from the jail to the courtröom with their hands shackled behind their backs, an unusual and arbitrary procedure that would have made it impossible for the brothers to carry confidential legal papers and would have made them easily susceptible to a blow or fall in the pot-hole filled tunnel connecting the jail to the courthouse, the brothers refused to appear in court. In retaliation to this defiance, prison officials stormed the Attica Brother's cells, beating and macing several of them. Brother OJ, who had his leg shot off during the Attica Assault, suffered a fractured hand; Brother Baba had a big gash on the back of his head. A third brother was beaten unconscious, and later charged with assault. The Judge, informed that the beatings were taking place at the jail, refused defense attorney's requests that he stop the proceedings and order the warden to allow the lawyers into the jail. Seven hours' passed before the defense lawyers were permitted to see their clients. -Harassment of Spectators. A large steel fence has been erected in the Erie County Courthouse to separate Attica legal proceedings from other trials. Persons wishing to watch Attica courtröom activities have been shocked upon confronting the coercive atmosphere surrounding the proceedings: all persons entering the courtröom are searched, their names and addresses recorded. The complaints ,of several women that matrons unnecessarily touched sensitive parts of their bodies, have been ignored by the court. These "security measures" are calculated to discourage people from attending Attica trials or hearings. Although severely handicapped by all these factors, ABLD has managed several court victories. Most recently, ABLD's Fair Jury Project successfully lenged the Érie County jury selection process as being unconstitutional, illegal, and discriminatory. Based on long-term statistical research, ABLD was able to prove that blacks. men and young people were severely under-represented on the juries. Jury Commission employees testified that they'd been instructed not to piek women's names from voter registration lists, resulting in a 68% under-representation of women. Faced with these uncontroverted facts, the judge was forced to throw out the jury pool and order a new selection process to be initiated. The new jury panels include much higher percentages of blacks, women and young people, a factor tending to enhance the possibiJity of fair trials for the Brothers. Asthe defense struggle continúes, the Attica Brothers need support in the streets and in the courtroom. A Detroit fundraiser, sponsored by the National Lawyers Guild, the ACLU, the Wolverine Bar (Association of black Michigan lawyers), and other support groups, is being planned for the late part of September, and a major memorial demonstration will be held in Buffalo during the week of September 9-15. Details will be released as plans are finalized. As always, financial need is dire. Contributions may be sent to: ÁBLD 147 Franklin St. Buffalo NY 14202 Legal Assistant to ABLD The following are Detroit attorneys representing Attica Brothers and actively involved with ABLD: Stuart Cohén Neal Bush Ken Mogill Ernest Goodman Bill Goodman George Bedrosian Dick Soble Abe Singer Í DickSkutt