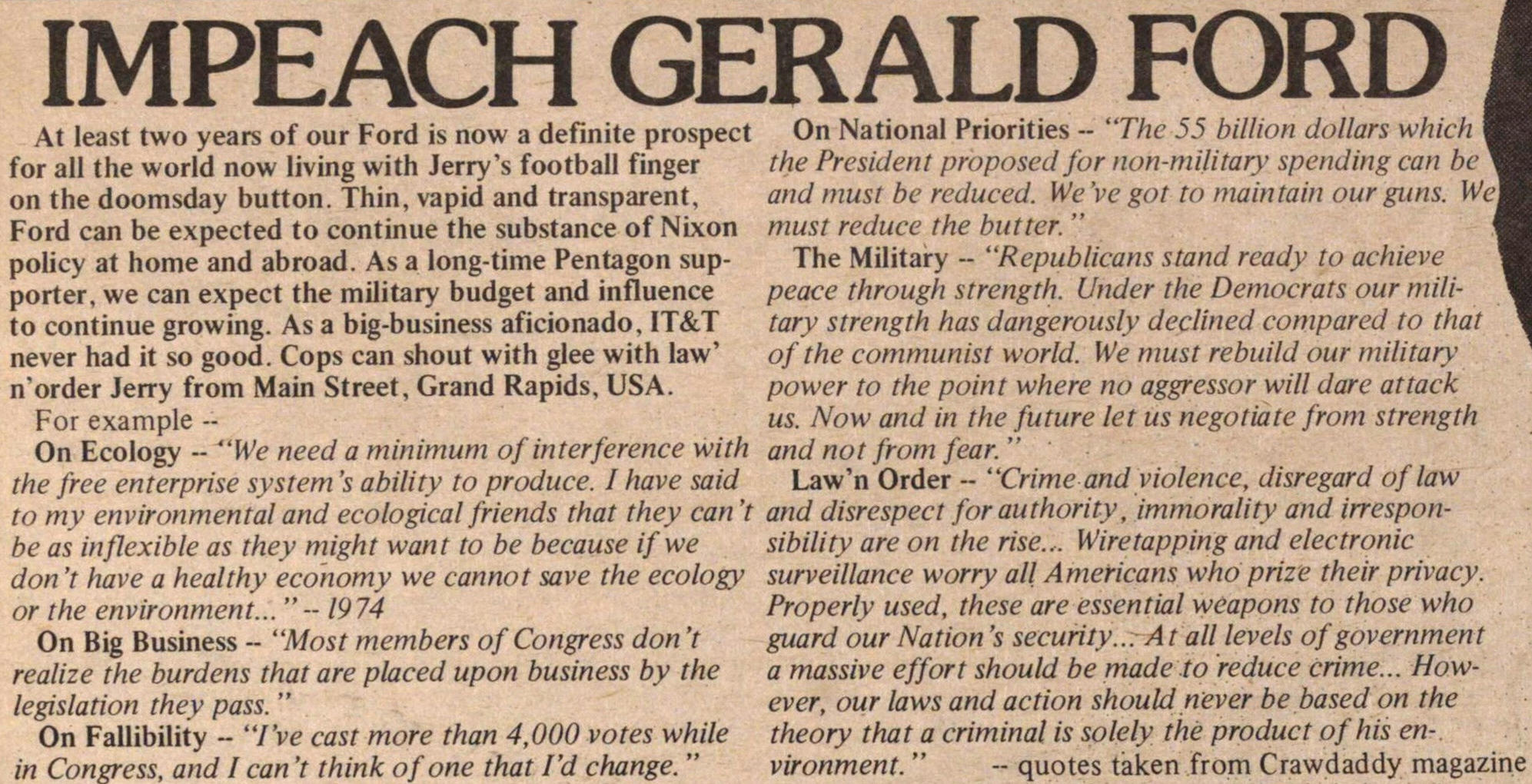 At least two years of our Ford is now a definite prospect for all the world now living with Jerry's football finger on the doomsday button. Thin, vapid and transparent. Ford can be expected to continue the substance of Nixon policy at home and abroad. As a long-time Pentagon supporter, we can expect the military budget and influence to continue growing. As a big-business aficionado. IT&T never had it so good. Cops can shout with glee with law' norder Jerry from Main Street, Grand Rapids, USA. For example -- On Ecology -- "We need a minimum of interference with the free enterprise system 's ability to produce. I have said to my environmental and ecological friends that they can 't be as inflexible as they might want to be because ifwe don 't have a healthy economy we cannot save the ecology or the environment... "-- 1974 On Big Business - "Most members ofCongress don 't realize the burdens that are placed upon business by the legislation they pass. " On Fallibility - "I've cast more than 4,000 votes while in Congress, and I can 't think ofone that I'd change. " On National Priorities - "The 55 billion dollars which ■ the President proposed fur non-military spending can be V and must be reduced. We've got to maintain our giins. WeU must reduce the butter. " flj The Military - "Republicans stand ready to achieve ■ peace through strength. Under the Democrats our M tary strength has dangerously declined compared to thal i of the communist world. We must rebuild our military power to the point where no aggressor will dore attack us. Now and in the future let us negotiatc from strength and not from fear. " Law'n Order -- "Crime and violence, disregard oflaw and disrespect for authority, immorality and irresponsibility are on the rise... Wiretapping and elee tronie surveillance worry all Americans who prize their privacy. Properly used, these are essential weapons to those who guard our Nation 's security... A t all levéis of government a massive effort should be made to reduce crime... However, our laws and action should nev er be based on the theory that a criminal is solely the product ofhis environment. " - quotes taken from Crawdaddy magazine