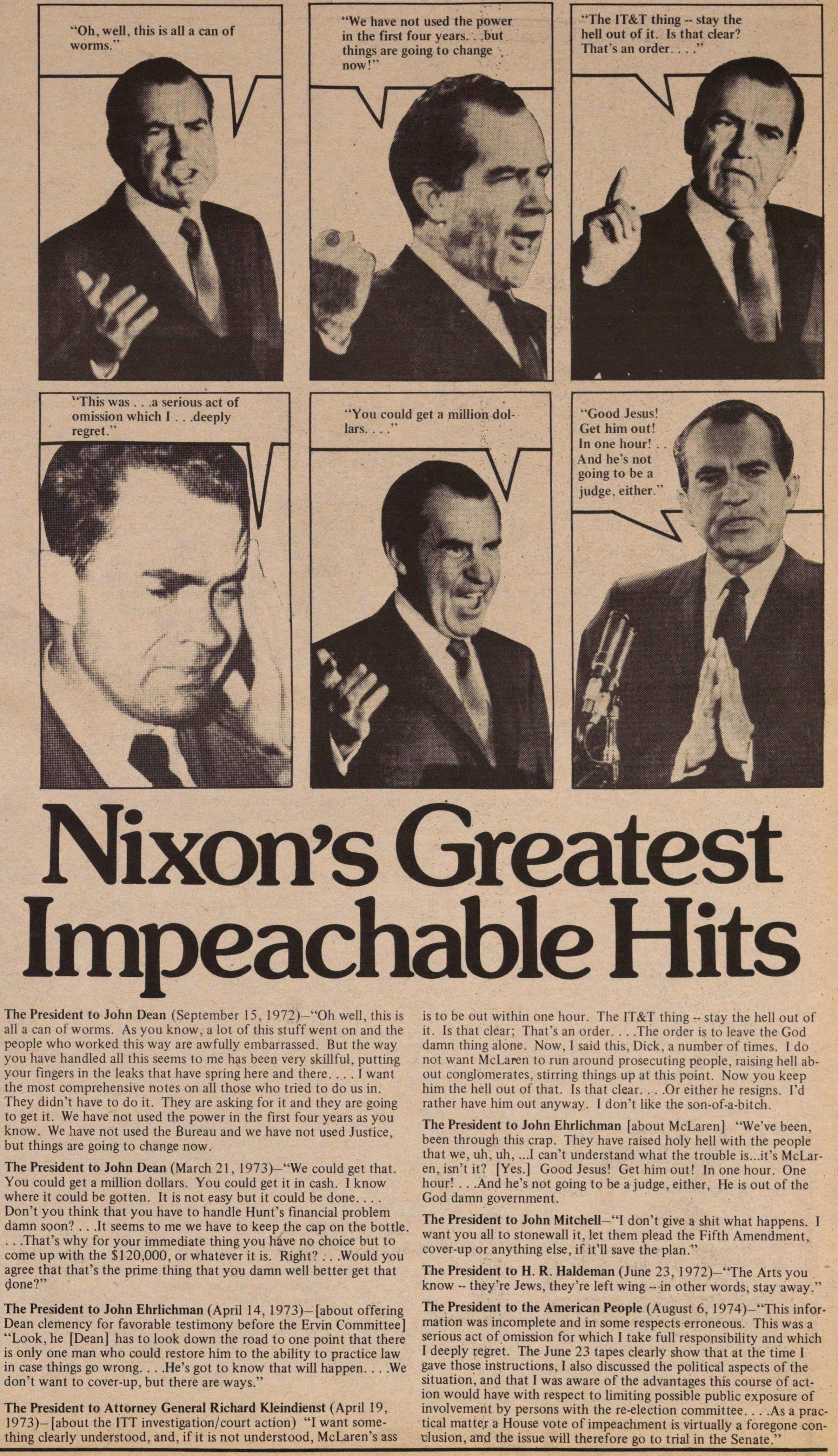 "We have not used the power in the first four years...but things are going to change now."

"The IT&T thing--stay the hell out of it. Is that clear? That's an order."

"That was...a serious act of omission which I...deeply regret."

"You could get a million dollars..."

The President to John Dean (September 15, 1972)-"Oh well, this is all a can of worms. As you know, a lot of this stuff went on and the people who worked this way are awfully embarrassed. But the way you have handled all this seems to me has been very skillful, putting your fingers in the leaks that have spring here and there. ... I want the most comprehensive notes on all those who tried to do us in. They didn't have to do it. They are asking for it and they are going to get it. We have not used the power in the first four years as you know. We have not used the Bureau and we have not used Justice, but things are going to change now.

The President to John Dean (March 21 , 1973) - "We could get that. You could get a million dollars. You could get it in cash. I know where it could be gotten. It is not easy but it could be done. . . . Don't you think that you have to handle Hunt's financial problem damn soon? . . .It seems to me we have to keep the cap on the bottle. . . .That's why for your immediate thing you have no choice but to come up with the $120,000, or whatever it is. Right? . . .Would you agree that that's the prime thing that you damn well better get that done?"

The President to John Ehrlichman (April 14, 1973) -[ about offering Dean clemency for favorable testimony before the Ervin Committee] "Look, he [Dean] has to look down the road to one point that there is only one man who could restore him to the ability to practice law in case things go wrong. . . .He's got to know that will happen. . . .We don't want to cover-up, but there are ways."

The President to Attorney General Richard Kleindienst (April 19, 1973)- [about the ITT investigation/court action) "I want something clearly understood, and, if it is not understood, McLaren's ass is to be out within one hour. The IT&T thing -- stay the heil out of it. Is that clear; That's an order. . . .The order is to leave the God damn thing alone. Now, I said this, Dick. a number of times. I do not want McLaren to run around prosecuting people, raising hell about conglomerates, stirring things up at this point. Now you keep him the hell out of that. Is that clear. . . .Or either he resigns. I'd rather have him out anyway. I don't like the son-of-a-bitch.

The President to John Ehrlichman [about McLaren] "We've been, been through this crap. They have raised holy hell with the people that we, uh, uh, ...I can't understand what the trouble is...it's McLaren, isn't it? [Yes.] Good Jesus! Get him out! In one hour. One hour! . . .And he's not going to be a judge, either, He is out of the God damn government.

The President to John Mitchell - "I don't give a shit what happens. I want you all to stonewall it, let them plead the Fifth Amendment, cover-up or anything else, if it'll save the plan."

The President to the American People (August 6, 1974) - "This information was incomplete and in some respects erroneous. This was a serious act of omission for which I take full responsibility and which I deeply regret. The June 23 tapes clearly show that at the time I gave those instructions, I also discussed the political aspects of the situation, and that I was aware of the advantages this course of action would have with respect to limiting possible public exposure of involvement by persons with the re-election committee. . . .As a practical matter a House vote of impeachment is virtually a foregone conclusion, and the issue will therefore go to trial in the Senate."