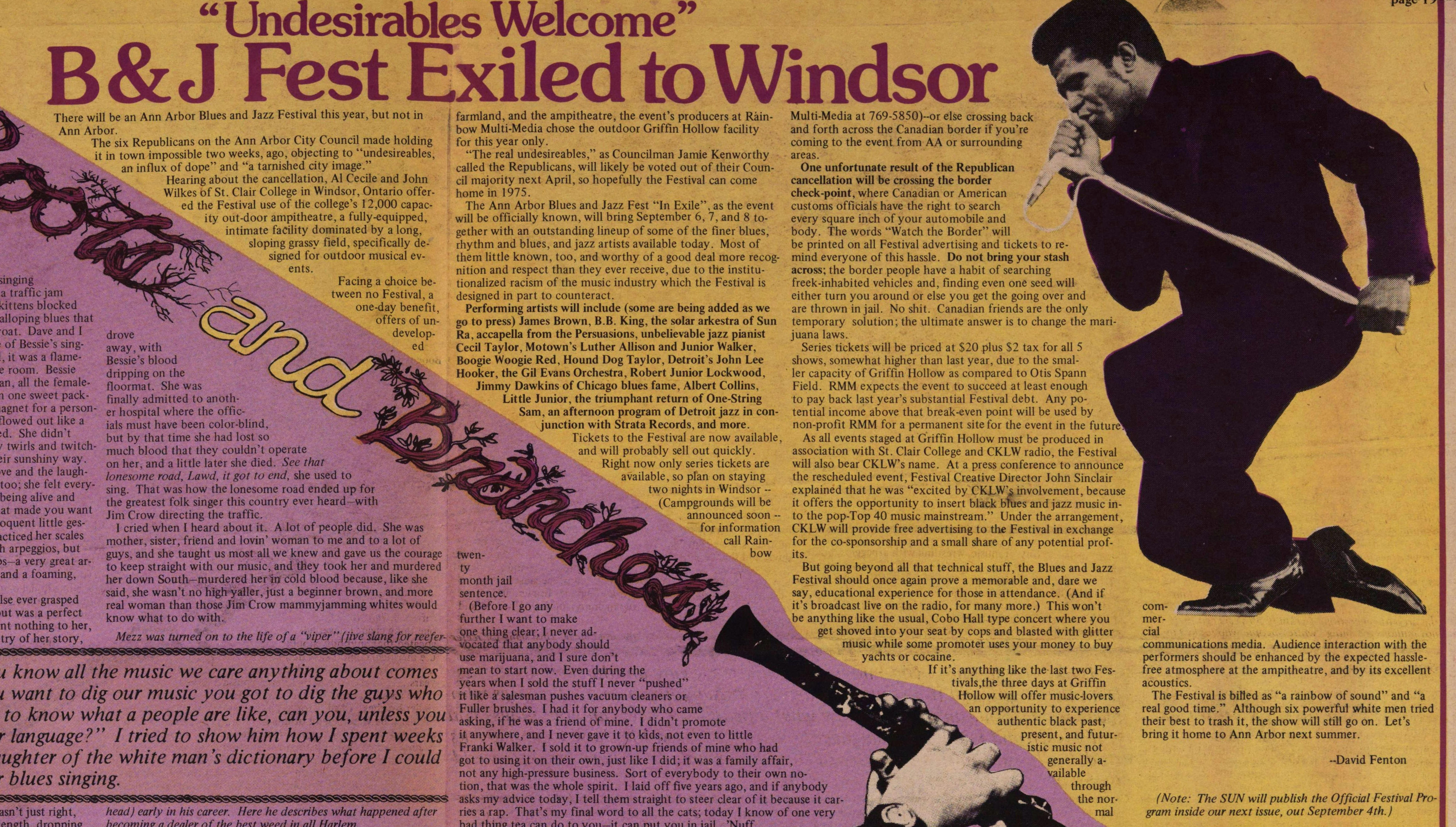 There will be an Ann Arbor Blues and Jazz Festival this year, but not in Ann Arbor. The six Republicans on the Ann Arbor City Council made holding it in town impossible two weeks, ago, objecting to undesireables, an influx of dope" and "a tarnished city image." Hearing about the cancellation, Al Cecile and John Wilkes of St. Clair College in Windsor, Ontario ed the Festival use of the college's 1 2,000 capacity out-door ampitheatre, a fully-equipped, intímate iaCiiity aominatea oy a long, sloping grassy field, specifieally signed for outdoor musical events. Facing a choice between no Festival, a one-day benefit, offers of undevelop- . ed farmland, and the ampitheatre, the event's producers at Ráinbow Multi-Media chose the outdoor Griffin Hollow facility for this year only. "The real undesireables," as Councilman Jamie Kenworthy called the Republicans, will likely be voted out of their Council majority next April, so hopefully the Festival can come home in 1975. The Ann Arbor Blues and Jazz Fest "In Exile", as the event will be officially known, will bring September 6, 7, and 8 together with an outstanding lineup of some of the finer blues, rhythm and blues, and jazz artists available today. Most of them little known, too, and worthy of a good deal more recognition and respect than they ever receive, due to the institutionalized racism of the music industry which the Festival is designed in part to counteract. Performing artists will include (some are being added as we go to press) James Brown, B.B. King, the solar arkestra of Sun Ra. acca pella f rom the Persuasions, unbelievable jazz pianist Cecil Taylor, Motown's Luther Allison and Junior Walker, Boogie Woogie Red, Hound Dog Taylor, Detroit's John Lee Hooker, the Gil Evans Orchestra, Robert Junior Lockwood, Jimmy uawKins oí L.nicago omes iame, Aioeri conins, Little Junior, the triumphant return of One-String Sam, an afternoon program of Detroit jazz in conjunction with Strata Records, and more. Tickets to the Festival are now available, and will probably sell out quickly. Right now only series tickets are available, so plan on staying two nights in Windsor -- (Campgrounds will be announced soon -- for informa tion cali Rainbow Multi-Media at 769-5850)-or else crossing back and forth across the Canadian border if you're coming to the event from AA or surrounding areas. One unfortunate result of the Republican cancellation wiil be crossing the border check-point, where Canadian or American customs officials have the right to search every square inch of your automobile and body. The words "Watch the Border" will be printed on all Festival advertising and tickets to 1 mind everyone of this hassle. Do not bring your stash " across; the border people have a habit of searching freek-inhabited vehicles and, finding even one seed will either turn you around or else you get the going over and are thrown in jail. No shit. Canadian friends are the only temporary solution; the ultímate answer is to change the marijuana laws. Senes tickets will be priced at 52Ü plus S2 tax tor all 5 shows, somewhat higher than last year, due to the smaller capacity of Griffin Hollow as compared to Otis Spann Field. RMM expects the event to succeed at least enough to pay back last year's substantial Festival debt. Any potential income above that break -even point will be used by non-profit RMM for a permanent site for the event in the future As all events staged at Griffin Hollow must be produced in association with St. Clair College and CKLW radio, the Festival will also bear CKLW's name. At a press conference to announce the rescheduled event, Festival Creative Director John Sinclair explained that he was "excited by CICLWinvolvement, because it offers the opportunity to insert black bfues and jazz music into the pop-Top 40 music mainstream." Under the arrangement, CKLW will provide free advertising to the Festival in exchange for the co-sponsorship and a small share of any poten tial its. But going beyond all that technical stuff, the Blues and Jazz Festival should once again prove a memorable and, daré we say, educational experience for those in attendance. (And if it's broadcast live on the radio, for many more.) This won't be anything like the usual, Cobo Hall type concert where you get shoved into your seat by cops and blasted with glitter rrtusic while some promoter uses your money to buy yachts or cocaïne. If it's anything like the last two tivals,the three days at Griffin Hollow will offer music-lovers an opportunity to expenence authentic black past, present, and futuristic music not generally available through the normal mercial Communications media. Audience interaction with the performers should be enhanced by the expected hasslefree atmosphere at the ampitheatre, and by its excellent acoustics. The Festival is bilied as "a rainbow of sound" and "a real good time." Although six powerful white men tried their best to trash it, the show will still go on. Let's bring it home to Ann Arbor next summer. (Note: The SUN will publish the Official Festival Program inside our next issue, out September 4th.)