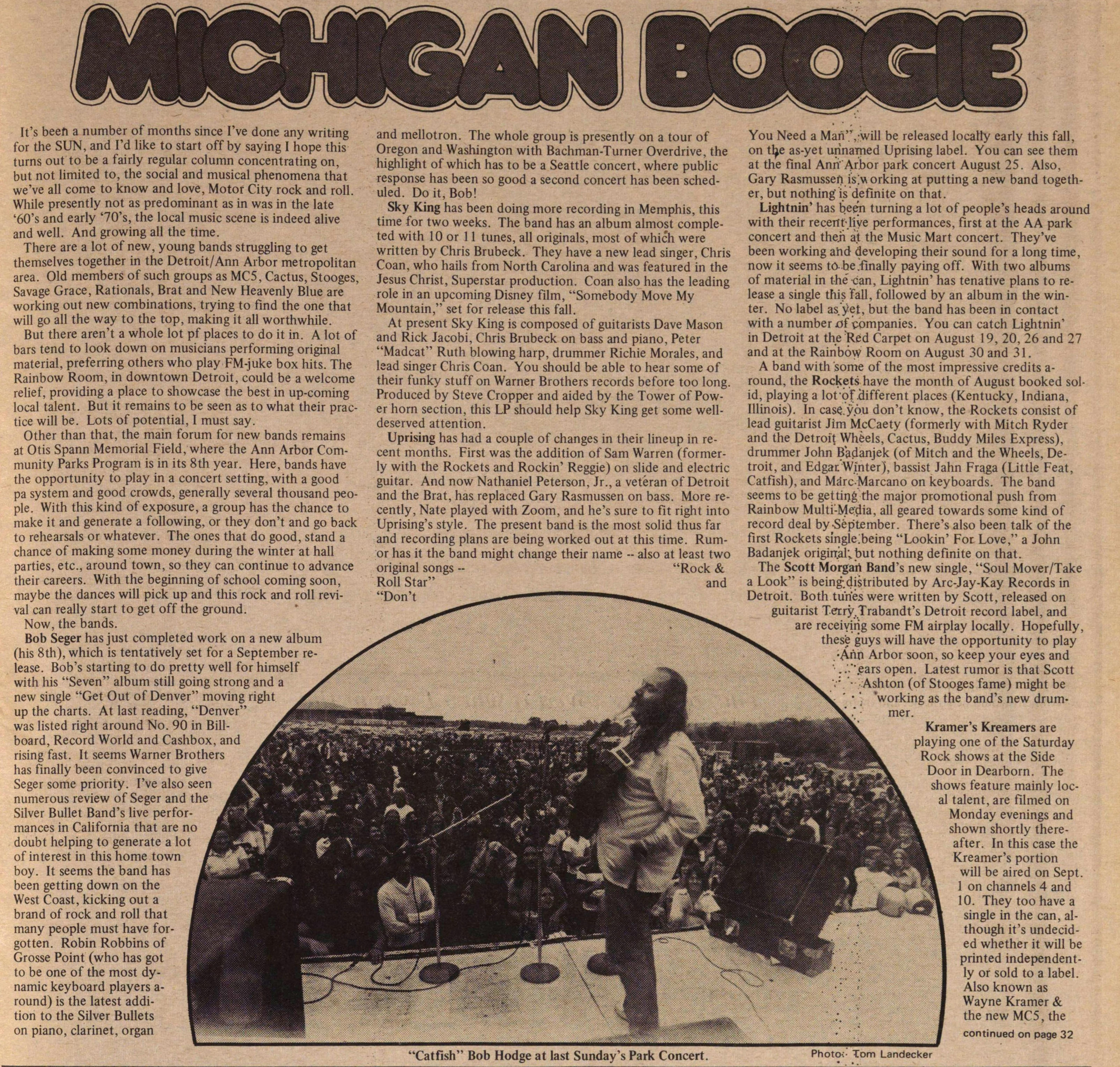 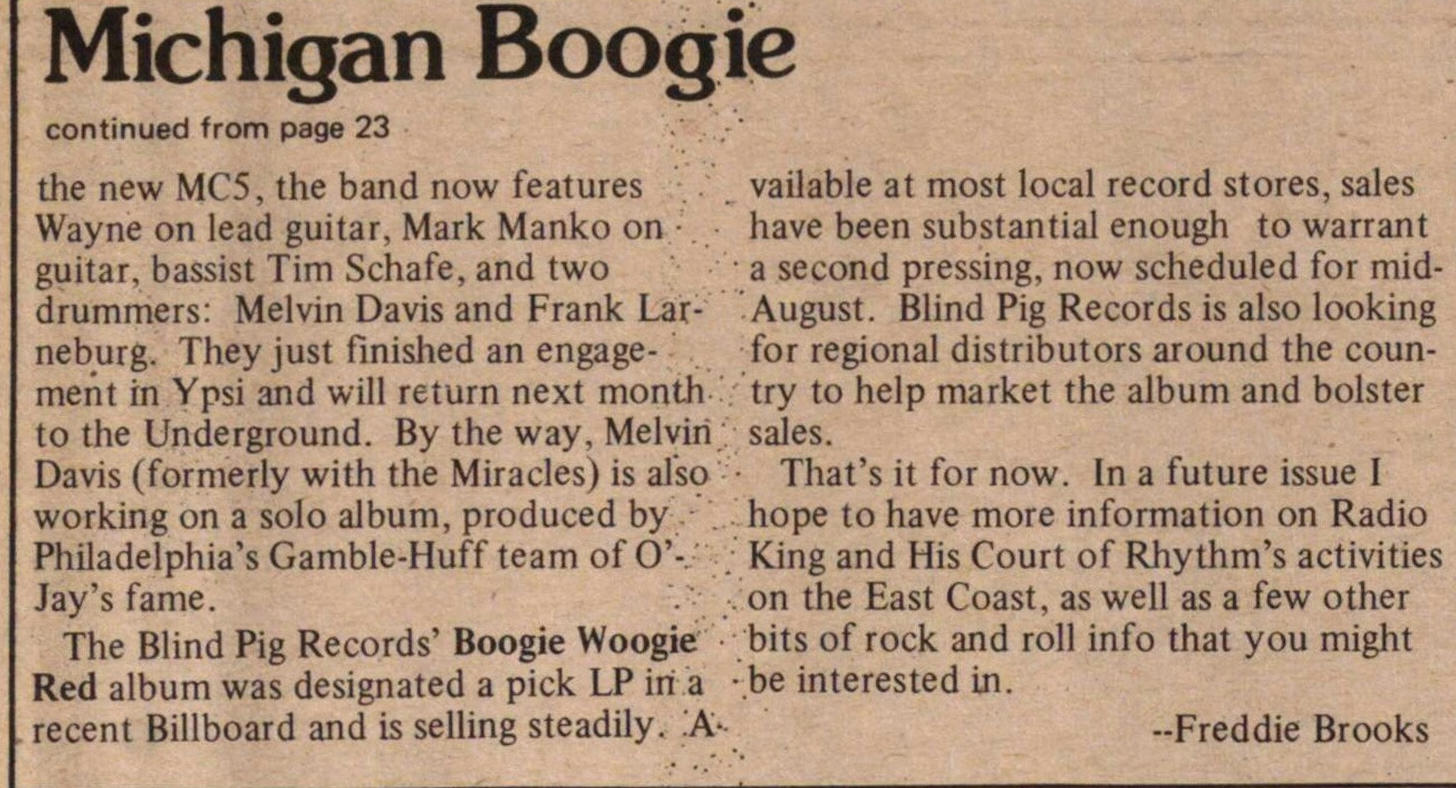 It's been a number of months since I've done any writing for the SUN, and I'd like to start off by saying I hope this turns out to be a fairly regular column concentrating on, but not limited to, the social and musical phenomena that we've all come to know and love, Motor City rock and roll. While presently not as predominant as in was in the late '60's and early '70's, the local music scene is indeed alive and well. And growing all the time. There are a lot of new, young bands struggling to get themselves together in the Detroit/Ann Arbor metropolitan area. Old members of such groups as MC5, Cactus, Stooges, Savage Grace, Rationals, Brat and New Heavenly Blue are working out new combinations, trying to find the one that will go all the way to the top, making it all worthwhile. But there aren't a whole lot of places to do it in. A lot of bars tend to look down on musicians performing original material, preferring others who play FM-juke box hits. The Rainbow Room, in downtown Detroit, could be a welcome relief, providing a place to showcase the best in up-coming local talent. But it remains to be seen as to what their practice will be. Lots of potential, I must say.

Other than that, the main forum for new bands remains at Otis Spann Memorial Field, where the Ann Arbor Community Parks Program is in its 8th year. Here, bands have the opportunity to play in a concert setting, with a good PA system and good crowds, generally several thousand people. With this kind of exposure, a group has the chance to make it and generate a following, or they don't and go back to rehearsals or whatever. The ones that do good, stand a chance of making some money during the winter at hall parties, etc., around town, so they can continue to advance their careers. With the beginning of school coming soon, maybe the dances will pick up and this rock and roll revival can really start to get off the ground.

Bob Seger has just completed work on a new album (his 8th), which is tentatively set for a September release. Bob's starting to do pretty well for himself with his "Seven" album still going strong and a new single "Get Out of Denver" moving right up the charts. At last reading, "Denver" was listed right around No. 90 in Billboard, Record World and Cashbox, and rising fast. It seems Warner Brothers has finally been convinced to give Seger some priority. I've also seen numerous reviews of Seger and the Silver Bullet Band's live performances in California that are no doubt helping to generate a lot of interest in this home town boy. It seems the band has been getting down on the West Coast, kicking out a brand of rock and roll that many people must have forgotten. Robin Robbins of Grosse Point (who has got to be one of the most dynamic keyboard players around) is the latest addition to the Silver Bullets on piano, clarinet, organ and mellotron. The whole group is presently on a tour of Oregon and Washington with Bachman-Turner Overdrive, the highlight of which has to be a Seattle concert, where public response has been so good a second concert has been scheduled. Do it,Bob!

Sky King has been doing more recording in Memphis, this time for two weeks. The band has an album almost completed with 10 or 11 tunes, all originals, most of which were written by Chris Brubeck. They have a new lead singer, Chris Coan, who hails from North Carolina and was featured in the Jesus Christ, Superstar production. Coan also has the leading role in an upcoming Disney film, "Somebody Move My Mountain," set for release this fall.

At present Sky King is composed of guitarists Dave Mason and Rick Jacobi, Chris Brubeck on bass and piano. Peter "Madcat" Ruth blowing harp, drummer Richie Morales, and lead singer Chris Coan. You should be able to hear some of their funky stuff on Warner Brothers records before too long. Produced by Steve Cropper and aided by the Tower of Power horn section, this LP should help Sky King get some well deserved attention.

Uprising has had a couple of changes in their lineup in recent months. First was the addition of Sam Warren (formerly with the Rockets and Rockin' Reggie) on slide and electric guitar. And now Nathaniel Peterson, Jr., a veteran of Detroit and the Brat, has replaced Gary Rasmussen on bass. More recently, Nate played with Zoom, and he's sure to fit right into Uprising's style. The present band is the most solid thus far and recording plans are being worked out at this time. Rumor has it the band might change their name -- also at least two original songs -- "Rock & Roll Star" and "Don't You Need a Man" will be released locally early this fall, on the as-yet unnamed Uprising label. You can see them at the final Ann Arbor park concert August 25. Also, Gary Rasmussen is working at putting a new band together, but nothing is definite on that.

Lightnin' has been turning a lot of people's heads around with their live performances, first at the AA park concert and their at the Music Mart concert. They've been working and developing their sound for a long time, now it seems be finally paying off. With two albums of material in the can, Lightnin' has tenative plans to release a single this fall, followed by an album in the winter. No label as yet, but the band has been in contact with a number of companies. You can catch Lightnin' in Detroit at the Red Carpet on August 19, 20, 26 and 27 and at the Rainbow Room on August 30 and 31 .

A band with some of the most impressive credits around, the Rockets have the month of August booked solid, playing a lot of different places (Kentucky, Indiana, Illinois). In case you don't know, the Rockets consist of lead guitarist Jim McCaety (formerly with Mitch Ryder and the Detroit Wheels, Cactus, Buddy Miles Express), drummer John Badanjek (of Mitch and the Wheels, Detroit, and Edgar Winter), bassist Jahn Fraja (Little Feat, Catfish), and Márc-Marcano on keyboards. The band seems to be getting-the major promotional push from Rainbow Multi-Media, all geared towards some kind of record deal by -September. There's also been talk of the first Rockets single;being "Lookin' For Love," a John Badanjek original; but nothing definite on that.

The Scott Morgan Band's new single, "Soul Mover/Take a Look" is being distributed by Arc-Jay-Kay Records in Detroit. Both tunes were written by Scott, released on guitarist Terry Trabandt's Detroit record label, and are receiving some FM airplay locally. Hopefully, these guys will have the opportunity to play Ann Arbor soon, so keep your eyes and ears open. Latest rumor is that Scott Ashton (of Stooges fame) might be working as the band's new drummer.

Kramer's Kreamers are playing one of the Saturday Rock shows at the Side Door in Dearborn. The shows feature mainly local talent, are filmed on Monday evenings and shown shortly thereafter. In this case the Kreamer's portion will be aired on Sept. 1 on channels 4 and 10. They too have a single in the can, although it's undecided whether it will be printed independently or sold to a label. Also known as Wayne Kramer & the new MC5, the

the new MC5, the band now features Wayne on lead guitar. Mark Manko on guitar, bassist Tim Schafe, and two drummers: Melvin Davis and Frank Larneburg. They just finished an engagement in Ypsi and will return next month to the Underground. By the way, Melvin Davis (formerly with the Miracles) is also working on a solo album, produced by Philadelphia's Gamble-Huff team of OJay's fame. The Blind Pig Records' Boogie Woogie Red album was designated a pick LP in a recent Billboard and is selling steadily. Available at most local record stores, sales have been substantial enough to warrant a second pressing, now scheduled for mid August. Blind Pig Records is also looking for regional distributors around the country to help market the album and bolster sales. That's it for now. In a future issue I hope to have more information on Radio King and His Court of Rhythm's activities on the East Coast, as well as a few other bits of rock and roll info that you might be interested in.