Why Ann Arbor Kicked Out The Blues 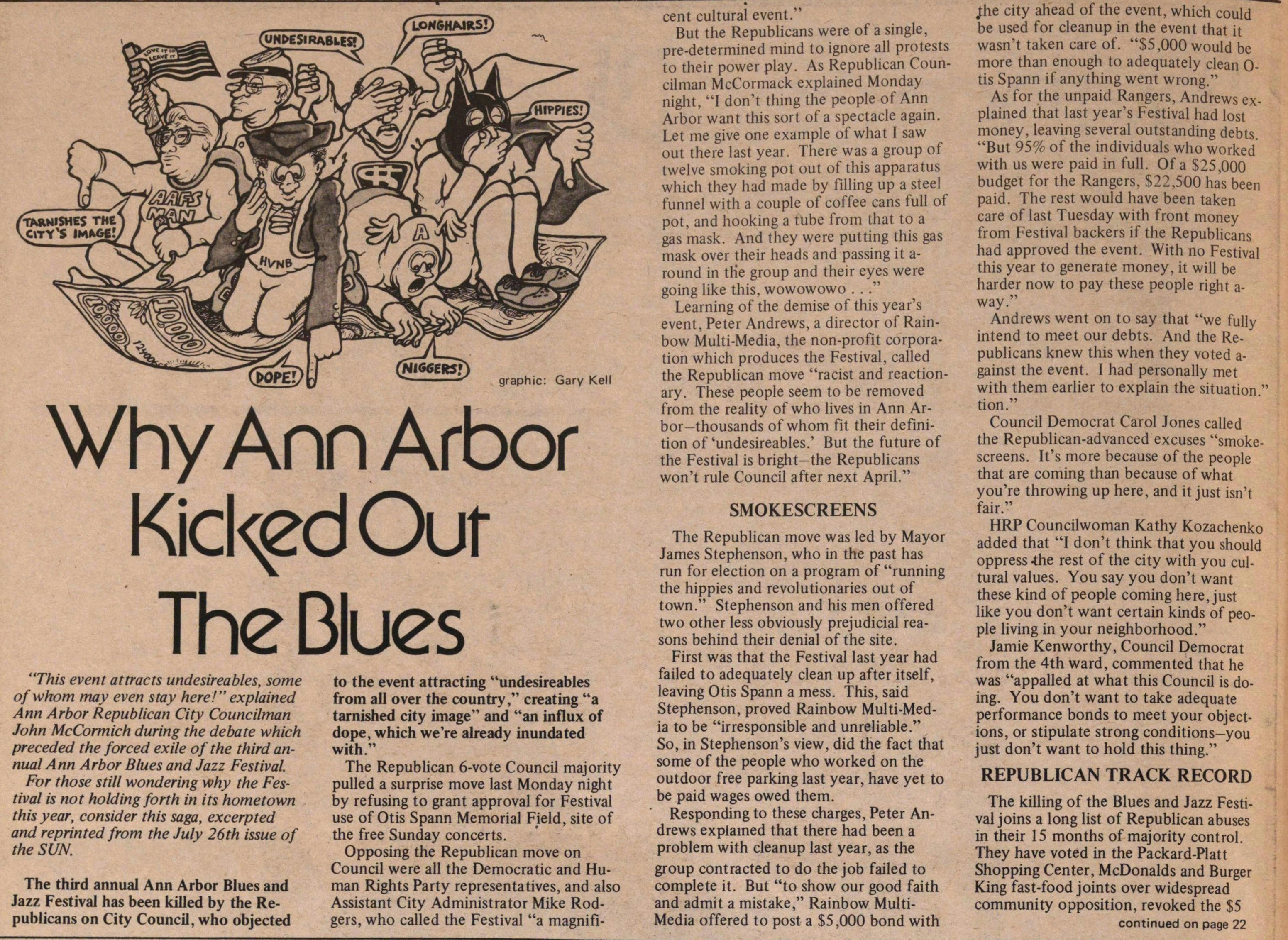 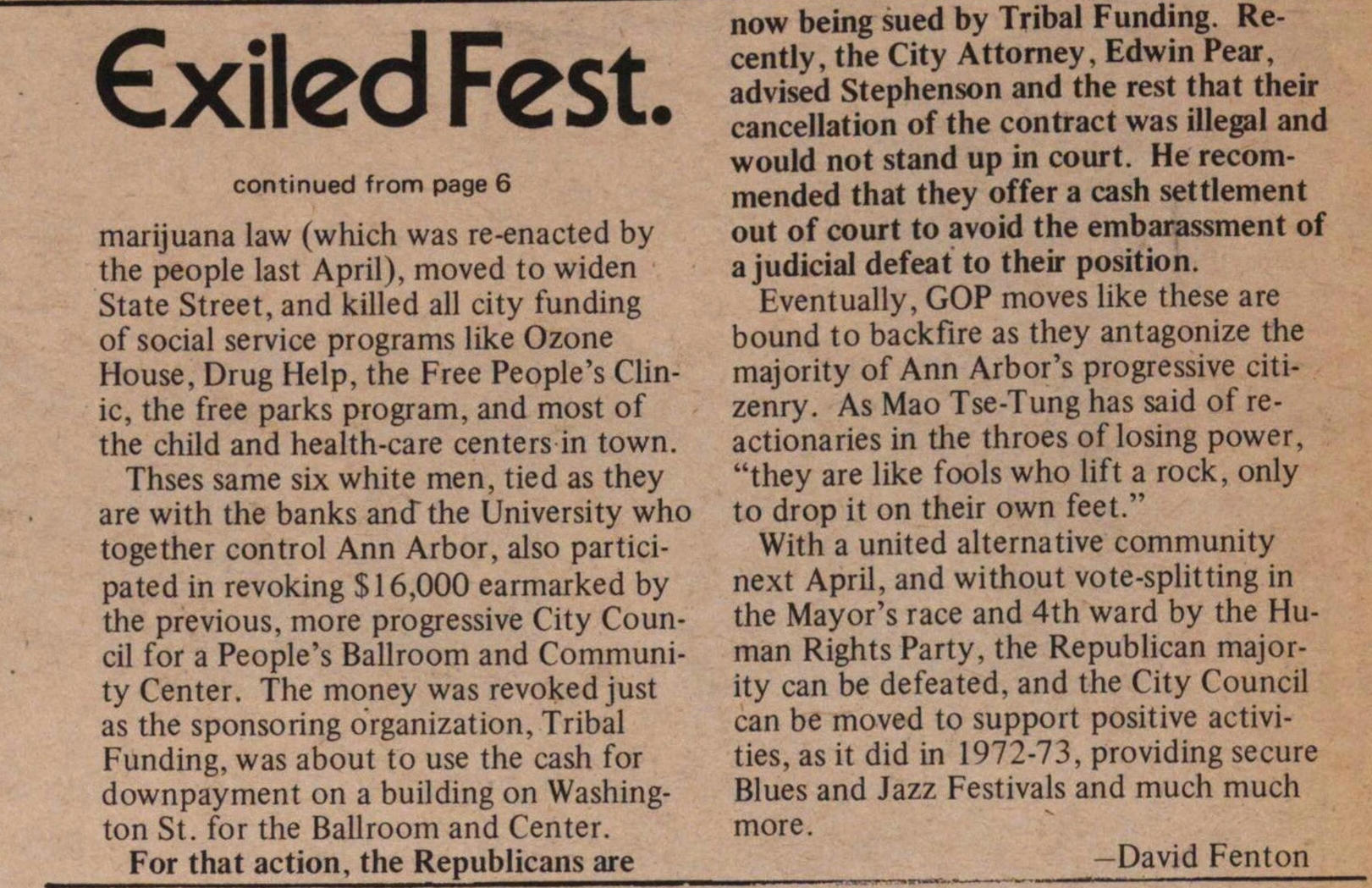 "This event attracts undesirables, some of whom may even stay here!" explained Ann Arbor Republican City Councilman John McCormich during the debate which preceded the forced exile of the third annual Ann Arbor Blues and Jazz Festival.

For those still wondering why the Festival is not holding forth in its hometown this year, consider this saga, excerpted and reprinted from the July 26th issue of the SUN.

The third animal Ann Arbor Blues and Jazz Festival has been killed by the Republicans on City Council, who objected to the event attracting "undesirables from all over the country," creating "a tarnished city image" and "an influx of dope, which we're already inundated with."

Opposing the Republican move on Council were all the Democratic and Human Rights Party representatives, and also Assistant City Administrator Mike Rodgers, who called the Festival "a magnificent cultural event."

But the Republicans were of a single, pre-determined mind to ignore all protests to their power play. As Republican Councilman McCormack explained Monday night, "I don't think the people of Ann Arbor want this sort of a spectacle again. Let me give one example of what I saw out there last year. There was a group of twelve smoking pot out of this apparatus which they had made by filling up a steel funnel with a couple of coffee cans full of pot, and hooking a tube from that to a gas mask. And they were putting this gas mask over their heads and passing it around in the group and their eyes were going like this. wowowowo . . ."

Learning of the demise of this year's event, Peter Andrews, a director of Rainbow Multi-Media, the non-profit corporation which produces the Festival, called the Republican move "racist and reactionary. These people seem to be removed from the reality of who lives in Ann Arbor- thousands of whom fit their definition of 'undesirables.' But the future of the Festival is bright- the Republicans won't rule Council after next April."

The Republican move was led by Mayor James Stephenson, who in the past has run for election on a program of "running the hippies and revolutionaries out of town." Stephenson and his men offered two other less obviously prejudicial reasons behind their denial of the site.

First was that the Festival last year had failed to adequately clean up after itself, leaving Otis Spann a mess. This, said Stephenson, proved Rainbow Multi-Media to be "irresponsible and unreliable." So, in Stephenson's view, did the fact that some of the people who worked on the outdoor free parking last year, have yet to be paid wages owed them.

Responding to these charges, Peter Andrews explained that there had been a problem with cleanup last year, as the group contracted to do the job failed to complete it. But "to show our good faith and admit a mistake," Rainbow MultiMedia offered to post a $5,000 bond with the city ahead of the event, which could be used for cleanup in the event that it wasn't taken care of. "$5,000 would be more than enough to adequately clean Otis Spann if anything went wrong."

As for the unpaid Rangers, Andrews explained that last year's Festival had lost money, leaving several outstanding debts. "But 95% of the individuals who worked with us were paid in full. Of a $25,000 budget for the Rangers, $22,500 has been paid. The rest would have been taken care of last Tuesday with front money from Festival backers if the Republicans had approved the event. With no Festival this year to generate money, it will be harder now to pay these people right away."

Andrews went on to say that "we fully intend to meet our debts. And the Republicans knew this when they voted against the event. I had personally met with them earlier to explain the situation."

Council Democrat Carol Jones called the Republican-advanced excuses "smokescreens. It's more because of the people that are coming than because of what you're throwing up here, and it just isn't fair."

HRP Councilwoman Kathy Kozachenko added that "I don't think that you should oppress the rest of the city with you cultural values. You say you don't want these kind of people coming here, just like you don't want certain kinds of people living in your neighborhood."

Jamie Kenworthy, Council Democrat from the 4th ward, commented that he was "appalled at what this Council is doing. You don't want to take adequate performance bonds to meet your objections, or stipulate strong conditions- you just don't want to hold this thing."

The killing of the Blues and Jazz Festival joins a long list of Republican abuses in their 15 months of majority control. They have voted in the Packard-Platt Shopping Center, McDonalds and Burger King fast-food joints over widespread community opposition, revoked the $5 marijuana law (which was re-enacted by the people last April), moved to widen State Street, and killed all city funding of social service programs like Ozone House, Drug Help, the Free People's Clinic, the free parks program, and most of the child and health-care centers in town.

These same six white men, tied as they are with the banks and the University who together control Ann Arbor, also participated in revoking $16,000 earmarked by the previous, more progressive City Council for a People's Ballroom and Community Center. The money was revoked just as the sponsoring organization, Tribal Funding, was about to use the cash for downpayment on a building on Washington St. for the Ballroom and Center.

For that action, the Republicans are now being sued by Tribal Funding. Recently, the City Attorney, Edwin Pear, advised Stephenson and the rest that their cancellation of the contract was illegal and would not stand up in court. He recommended that they offer a cash settlement out of court to avoid the embarrassment of a judicial defeat to their position.

Eventually, GOP moves like these are bound to backfire as they antagonize the majority of Ann Arbor's progressive citizenry. As Mao Tse-Tung has said of reactionaries in the throes of losing power, "they are like fools who lift a rock, only to drop it on their own feet."

With a united alternative community next April, and without vote-splitting in the Mayor's race and 4th ward by the Human Rights Party, the Republican majority can be defeated, and the City Council can be moved to support positive activities, as it did in 1972-73, providing secure Blues and Jazz Festivals and much much more.