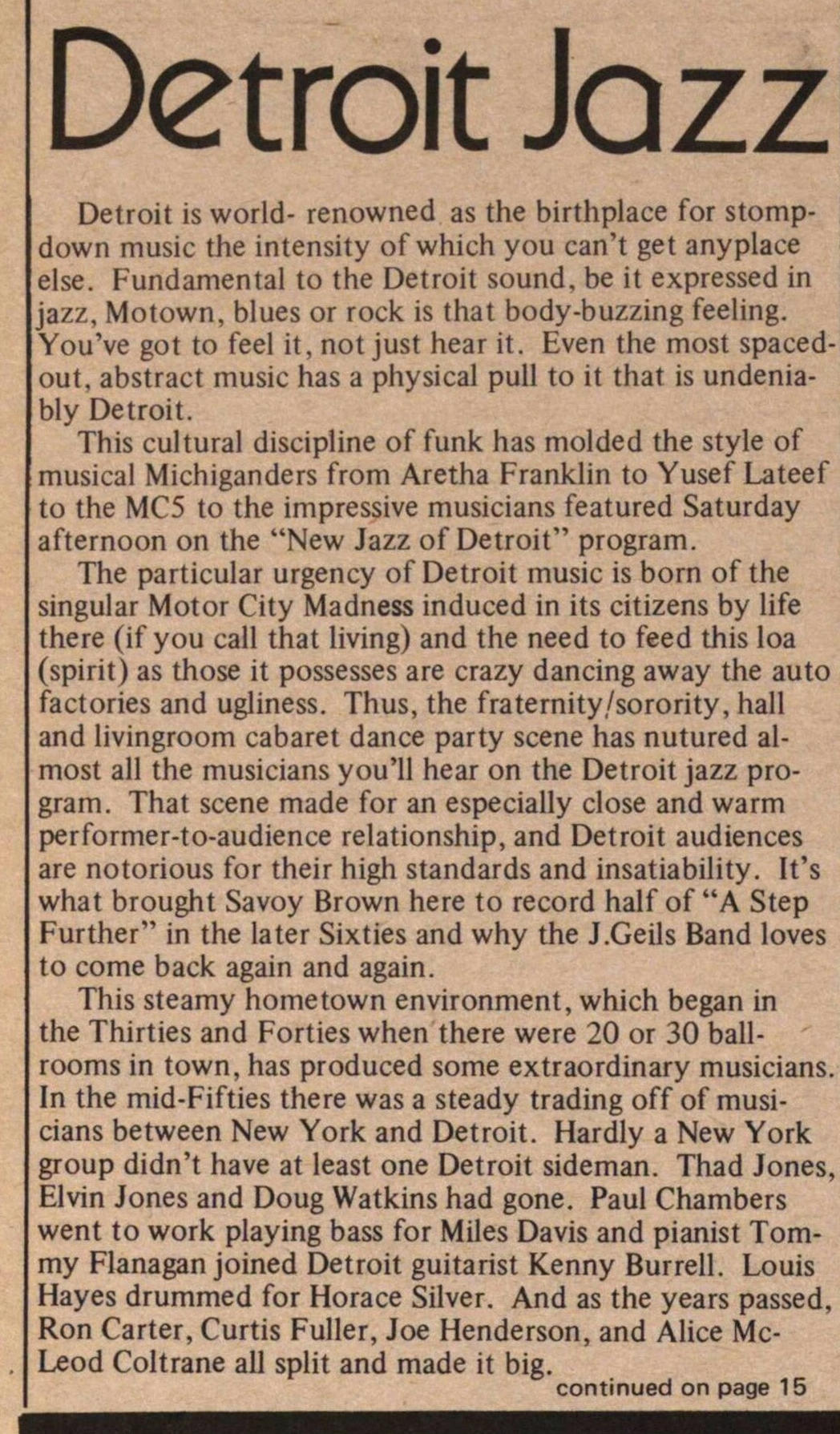 Detroit is world- renowned as the birthplace for stompdown music the intensity of which you can't get anyplace else. Fundamental to the Detroit sound, be it expressed in jazz, Motown, blues or rock is that body-buzzing feeling. You've got to feel it, not just hear it. Even the most spaced-out, abstract music has a physical pull to it that is undeniably Detroit.
This cultural discipline of funk has molded the style of musical Michiganders from Aretha Franklin to Yusef Lateef to the MC5 to the impressive musicians featured Saturday afternoon on the "New Jazz of Detroit" program.
The particular urgency of Detroit music is born of the singular Motor City Madness induced in its citizens by life there (if you cali that living) and the need to feed this loa (spirit) as those it possesses are crazy dancing away the auto factories and ugliness. Thus, the fraternity/sorority, hall and living room cabaret dance party scene has nurtured almost all the musicians you'll hear on the Detroit jazz program. That scene made for an especially close and warm performer-to-audience relationship, and Detroit audiences are notorious for their high standards and insatiability. It's what brought Savoy Brown here to record half of "A Step Further" in the later Sixties and why the J.Geils Band loves to come back again and again.
This steamy hometown environment, which began in the Thirties and Forties when there were 20 or 30 ballrooms in town, has produced some extraordinary musicians. In the mid-Fifties there was a steady trading off of musicians between New York and Detroit. Hardly a New York group didn't have at least one Detroit sideman. Thad Jones, Elvin Jones and Doug Watkins had gone. Paul Chambers went to work playing bass for Miles Davis and pianist Tommy Flanagan joined Detroit guitarist Kenny Burrell. Louis Hayes drummed for Horace Silver. And as the years passed, Ron Carter, Curtis Fuller, Joe Henderson, and Alice Mc- Leod Coltrane all split and made it big.

For the creative musicians who stayed the problem has always been where to play. Ever since the late Fifties, Detroit musicians have responded to this situation with self-determination efforts. In those early days they formed the "Musicians Brotherhood" and ran the very successful World Stage. The jazz scene soon almost dried up anyway, and it wasn't until John Sinclair and trumpeter Charles Moore and others instituted the Artists Workshop, 1964-1966, that things got to cooking again. The Workshop was open to all artists. It was a place to exchange ideas and to create in peace and was essentially an underground phenomenon.
In 1968 the members of the CJQ (Contemporary Jazz Quintet) and several others formed the Detroit Creative Musicians Association which sponsored Sunday afternoon concerts at the Detroit Repertory Theatre and at the VFW Hall on the Wayne State campus. When this group folded, due to organizational problems, the Strata Corporation rose from their ashes in July of 1969. Strata's purpose was/is 1) to bring genuine economic stability to the artistic community, 2) to bring artistic integrity to those commercial endeavors perpetrated upon artistic talents, 3) to bring events of cultural relevance to our contemporary community, and 4) to bring genuine communication and cohesion between the various art media by the joint production of events and projects, thereby bringing real education of other art forms to each artisan and an expression of his awareness.
Strata organized the Synergy Series in 1970 which established a forum for local musicians at the Detroit Institute of the Arts and basically engendered much good feeling. In the summer of 1970 Strata found a permanent place of their own on Michigan Avenue and for the next 18 months the Strata Concert Gallery brought to Detroit the best of both the local and national jazz scenes including appearances by Herbie Hancock, McCoy Tyner, the CJQ and Joe Henderson.
Financial reverses due to many of the same factors that made self-determination music a necessity for Detroit, namely good old American institutional racism, brought the Strata Corp. to a slightly different strategy and a new home at 46 Selden Street, just off the WSU campus. The Strata Corporation has begun to concentrate on publishing, production and recording.
Of course, the Strata Corporation isn't the only self-determination jazz record and production organization in Michigan, just the first. Tribe Records also operates out of Detroit, producing and distributing records by Wendell Harrison, Marcus Belgrave, Phil Renelin, both separately and as Tribe. Nationwide, there is a growing handful of independent efforts by jazzmen. Strata-East, Strata's sister organization out of New York features artists Stan Cowell, Charles Toliver, Cecil McBee, Jimmy Hopps, and others. Sun Ra has been served by his Saturn Records for one and a half decades now, and the Jazz Composers Orchestra (hand in hand with New Music Distributors) has released excellent records on their own label, including the gaudy , mysterious and wonderful, "Escalator Over the Hill." Since 1965, the Association for the Advancement of Creative Musicians has been the source of a marvelous catalogue of new music distributed on Delmark Records, which includes works by Mauríce Mclntyre, Joseph Jaman, Roscoe Mitchell, Richard Abrams, and Anthony Braxton.
Anyway , you'll know just where to go after Detroit's New Jazz artists knock you out. Watch for Strata Records' fall release which will include offerings from Kenn Cox, Mixed Bag, The Lyman Woodard Organization, Ron English, and the CJQ, all of these firmly in the venerable, asskicking Detroit tradition.

- Bill Adler, with thanks to and godspeed from Ron English and Bob Rudnick