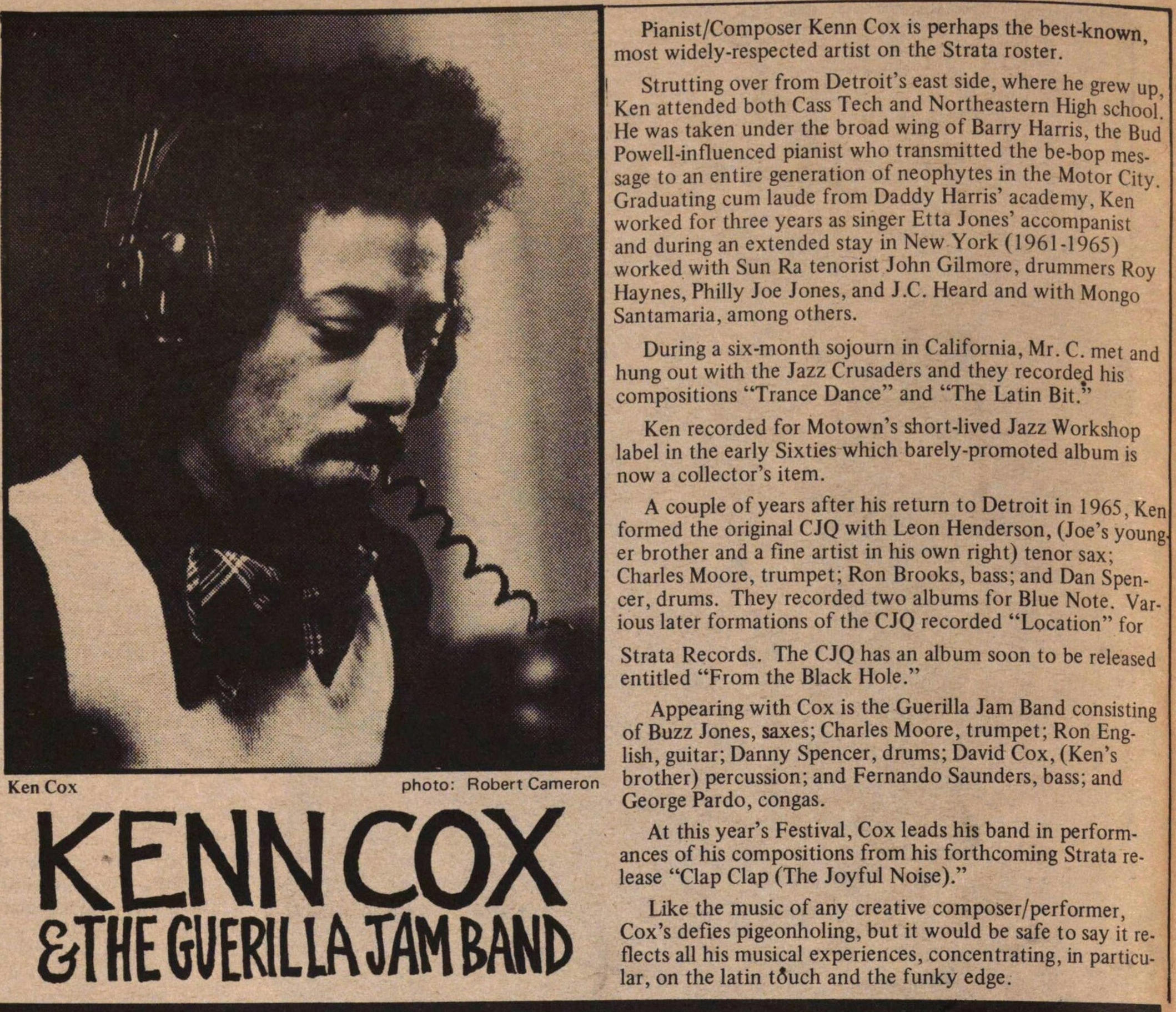 Pianist/Composer Kenn Cox is perhaps the best-known most widely-respected artist on the Strata roster.
Strutting over from Detroit's east side, where he grew up Ken attended both Cass Tech and Northeastern High school. He was taken under the broad wing of Barry Harris, the Bud Powell-influenced pianist who transmitted the be-bop message to an entire generation of neophytes in the Motor City. Graduating cum laude from Daddy Harris academy, Ken worked for three years as singer Etta Jones' accompanist and during an extended stay in New York (1961-1965) worked with Sun Ra tenorist John Gilmore, drummers Roy Haynes, Philly Joe Jones, and J.C. Heard and with Mongo Santamaria, among others.
During a six-month sojourn in California, Mr. C. met and hung out with the Jazz Crusaders and they recorded his compositions "Trance Dance" and "The Latin Bit."
Ken recorded for Motown's short-lived Jazz Workshop label in the early Sixties which barely-promoted album is now a collector's item.
A couple of years after his return to Detroit in 1965, Ken formed the original CJQ with Leon Henderson, (Joe's younger brother and a fine artist in his own right) tenor sax; Charles Moore, trumpet; Ron Brooks, bass; and Dan Spencer, drums. They recorded two albums for Blue Note. Various later formations of the CJQ recorded "Location" for Strata Records. The CJQ has an album soon to be released entitled "From the Black Hole."
Appearing with Cox is the Guerilla Jam Band consisting of Buzz Jones, saxes; Charles Moore, trumpet; Ron English, guitar; Danny Spencer, drums; David Cox, (Ken's brother) percussion; and Fernando Saunders, bass; and George Pardo, congas.
At this year's Festival, Cox leads his band in performances of his compositions from his forthcoming Strata release "Clap Clap (The Joyful Noise)."
Like the music of any creative composer/performer, Cox's defies pigeonholing, but it would be safe to say it reflects all his musical experiences, concentrating, in particular, on the latin touch and the funky edge.