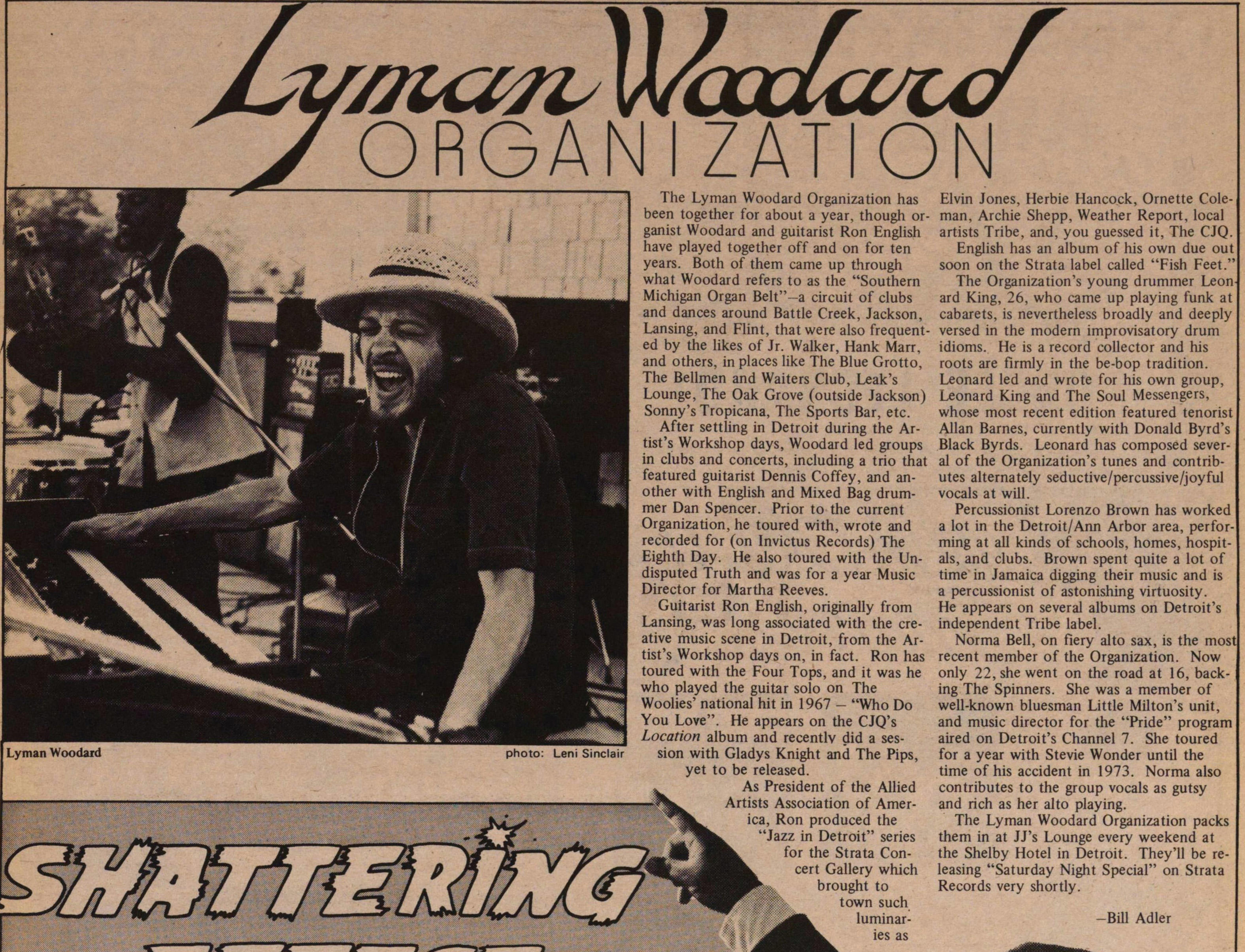 The Lyman Woodard Organization has been together for about a year, though organist Woodard and guitarist Ron English have played together off and on for ten years. Both of them came up through what Woodard refers to as the "Southern Michigan Organ Belt"-a circuit of clubs and dances around Battle Creek, Jackson, Lansing, and Flint, that were also frequented by the likes of Jr. Walker, Hank Marr, and others, in places like The Blue Grotto, The Bellmen and Waiters Club, Leak's Lounge, The Oak Grove (outside Jackson) Sonny's Tropicana, The Sports Bar, etc.
After settling in Detroit during the Artist's Workshop days, Woodard led groups in clubs and concerts, including a trio that featured guitarist Dennis Coffey, and another with English and Mixed Bag drummer Dan Spencer.
Prior to the current Organization, he toured with, wrote and recorded for (on Invictus Records) The Eighth Day. He also toured with the Undisputed Truth and was for a year Music Director for Martha Reeves.
Guitarist Ron English, originally from Lansing, was long associated with the creative music scene in Detroit, from the Artist's Workshop days on, in fact. Ron has toured with the Four Tops, and it was he who played the guitar solo on The Woolies' national hit in 1967 - "Who Do You Love". He appears on the CJQ's Location album and recently did a session with Gladys Knight and The Pips, yet to be released.
As President of the Allied Artists Association of America, Ron produced the "Jazz in Detroit" series for the Strata Concert Gallery which brought to town such luminaries as Elvin Jones, Herbie Hancock, Ornette Coleman, Archie Shepp, Weather Report, local artists Tribe, and, you guessed it, The CJQ.
English has an album of his own due out soon on the Strata label called "Fish Feet."
The Organization's young drummer Leonard King, 26, who carne up playing funk at cabarets, is nevertheless broadly and deeply versed in the modern improvisatory drum idioms. He is a record collector and his roots are firmly in the be-bop tradition.
Leonard led and wrote for his own group, Leonard King and The Soul Messengers, whose most recent edition featured tenorist Allan Barnes, currently with Donald Byrd's Black Byrds. Leonard has composed several of the Organization's tunes and contributes alternately seductive/percussive/joyful vocals at will.
Percussionist Lorenzo Brown has worked a lot in the Detroit Ann Arbor area, performing at all kinds of schools, homes, hospitals, and clubs. Brown spent quite a lot of time in Jamaica digging their music and is a percussionist of astonishing virtuosity. He appears on several albums on Detroit's independent Tribe label.
Norma Bell, on fiery alto sax, is the most recent member of the Organization. Now only 22,she went on the road at 16, backing The Spinners. She was a member of well-known bluesman Little Milton's unit, and music director for the "Pride" program aired on Detroit's Channel 7. She toured for a year with Stevie Wonder until the time of his accident in 1973. Norma also contributes to the group vocals as gutsy and rich as her alto playing.
The Lyman Woodard Organization packs them in at JJ's Lounge every weekend at the Shelby Hotel in Detroit. They'll be releasing "Saturday Night Special" on Strata Records very shortly.