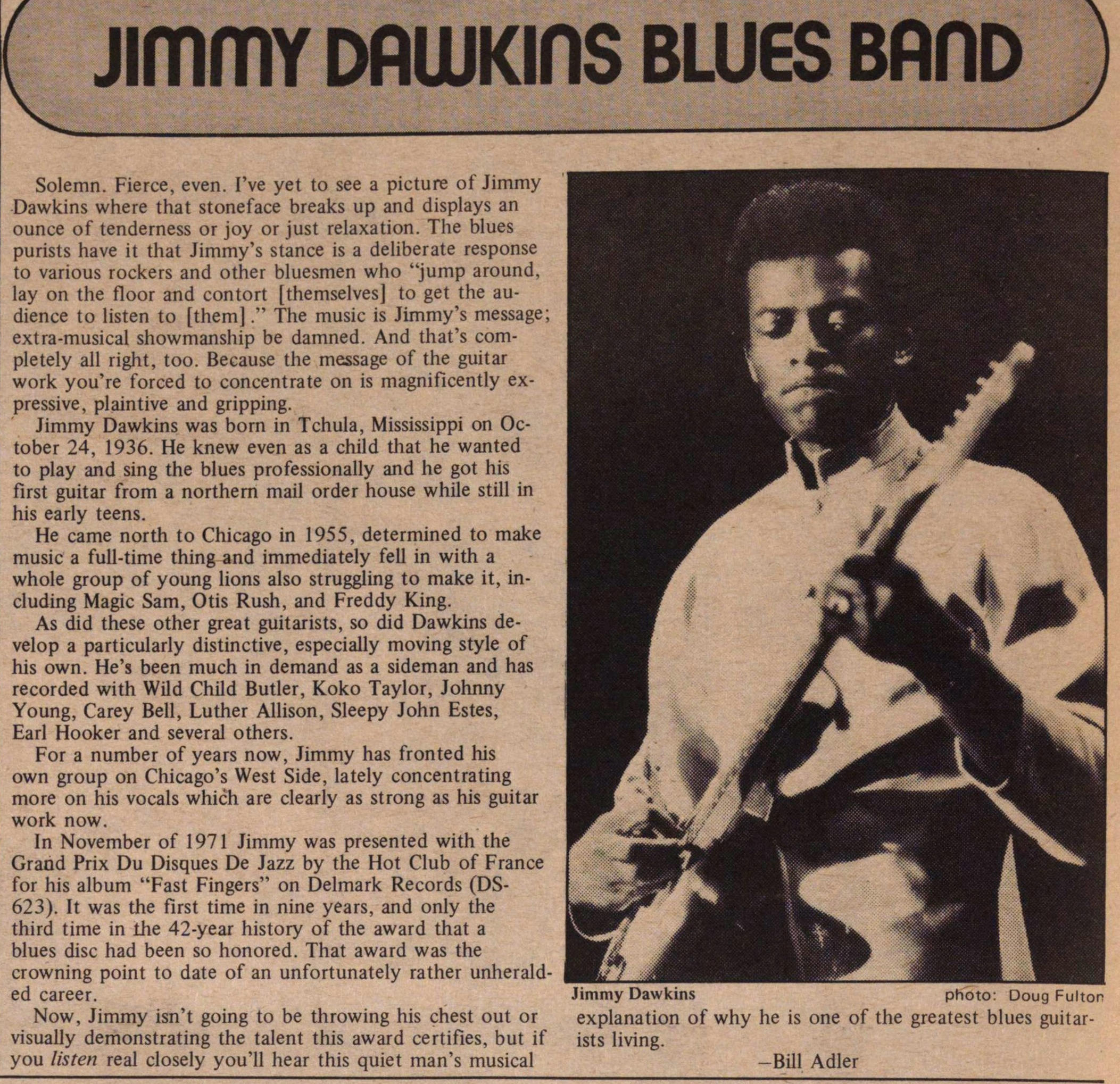 Solemn. Fierce, even. I've yet to see a picture of Jimmy Dawkins where that stoneface breaks up and displays an ounce of tenderness or joy or just relaxation. The blues purists have it that Jimmy's stance is a deliberate response to various rockers and other bluesmen who "jump around, lay on the floor and contort [themselves] to get the audience to listen to [them] ." The music is Jimmy's message; extra-musical showmanship be damned. And that's completely all right, too. Because the message of the guitar work you're forced to concentrate on is magnificently expressive, plaintive and gripping.
Jimmy Dawkins was born in Tchula, Mississippi on October 24, 1936. He knew even as a child that he wanted to play and sing the blues professionally and he got his first guitar from a northern mail order house while still in his early teens.
He came north to Chicago in 1955, determined to make music a full-time thing and immediately fell in with a whole group of young lions also struggling to make it, including Magie Sam, Otis Rush, and Freddy King.
As did these other great guitarists, so did Dawkins develop a particularly distinctive, especially moving style of his own. He's been much in demand as a sideman and has recorded with Wild Child Butler, Koko Taylor, Johnny Young, Carey Bell, Luther Allison, Sleepy John Estes, Earl Hooker and several others.
For a number of years now, Jimmy has fronted his own group on Chicago's West Side, lately concentrating more on his vocals which are clearly as strong as his guitar work now.
In November of 1971 Jimmy was presented with the Grand Prix Du Disques De Jazz by the Hot Club of France for his album "Fast Fingers" on Delmark Records (DS623). It was the first time in nine years, and only the third time in the 42-year history of the award that a blues disc had been so honored. That award was the crowning point to date of an unfortunately rather unheralded career.
Now, Jimmy isn't going to be throwing his chest out or visually demonstrating the talent this award certifïes, but if you listen real closely you'll hear this quiet man's musical explanation of why he is one of the greatest blues guitarists living.