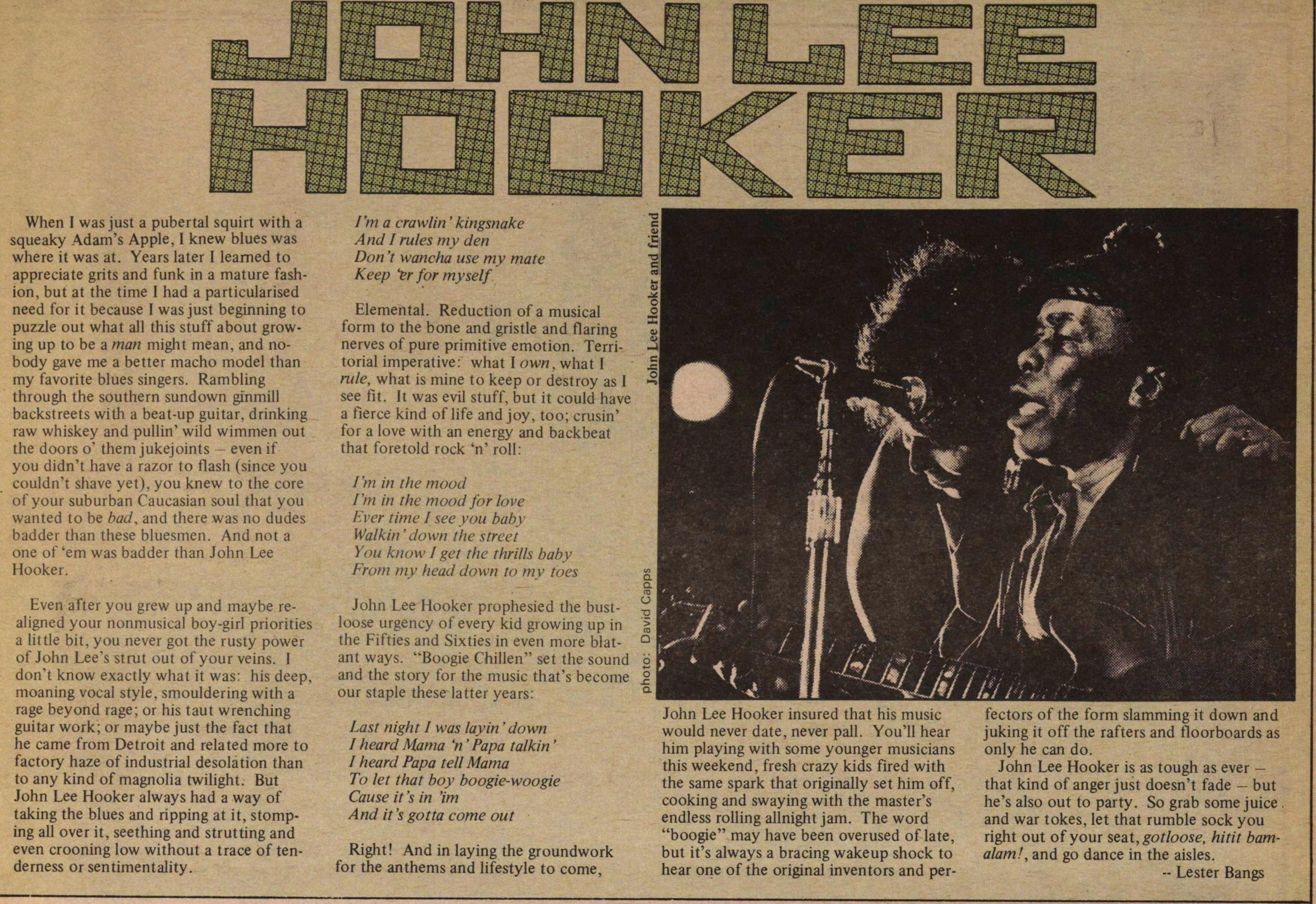 When I was just a pubertal squirt with a squeaky Adam's Apple, I knew blues was where it was at. Years later I learned to appreciate grits and funk in a mature fashion, but at the time I had a particularied need for it because I was just beginning to puzzle out what all this stuff about growing up to be a man might mean, and nobody gave me a better macho model than my favorite blues singers. Rambling through the southern sundown ginmill backstreets with a beat-up guitar, drinking raw whiskey and pulling wild wimmen out the doors o' them jukejoints - even f you didn't have a razor to flash (since you couldn't shave yet), you knew to the core of your suburban Caucasian soul that you wanted to be bad, and there was no dudes badder than these bluesmen. And not a one of 'em was badder than John Lee Hooker.

Even after you grew up and maybe realigned your nonmusical boy-girl priorities a little bit, you never got the rusty power of John Lee's strut out of your veins. I don't know exactly what it was: his deep, moaning vocal style, smouldering with a rage beyond rage; or his taut wrenching guitar work; or maybe just the fact that he carne from Detroit and related more to factory haze of industrial desolation than to any kind of magnolia twilight. But John Lee Hooker always had a way of taking the blues and ripping at it, stomping all over it, seething and strutting and even crooning low without a trace of tenderness or sentimentality.

And I rules my den

Don't wancha use my mate

Keep 'er for myself

Elemental. Reduction of a musical form to the bone and gristle and flaring nerves of pure primitive emotion. Territorial imperative: what I own, what I rule, what is mine to keep or destroy as I see fit. It was evil stuff, but it could have a fierce kind of life and joy, too; crusin' for a love with an energy and backbeat that foretold rock 'n' roll:

l'm in the mood

l'm in the mood for love

Ever time I see you baby

Walkin' down the street

John Lee Hooker prophesied the bust-loose urgency of every kid growing up in the Fifties and Sixties in even more blatant ways. "Boogie Chillen" set the sound and the story for the music that's become our staple these latter years:

Last night I was layin 'down

To let that boy boogie-woogie

Cause it's in 'im

And it 's gotta come out

Right! And in laying the groundwork for the anthems and lifestyle to come, John Lee Hooker insured that his music would never date, never pall. You'll hear him playing with some younger musicians this weekend, fresh crazy kids fired with the same spark that originally set him off, cooking and swaying with the master's endless rolling all night jam. The word "boogie" may have been overused of late, but it's always a bracing wakeup shock to hear one of the original inventors and perfectors of the form slamming it down and juking it off the rafters and floorboards as only he can do.

John Lee Hooker is as tough as ever - that kind of anger just doesn't fade - but he's also out to party. So grab some juice . and war tokes, let that rumble sock you right out of your seat, got loose, hitit bam-alam!, and go dance in the aisles.