Jr. Walker And The All Stars 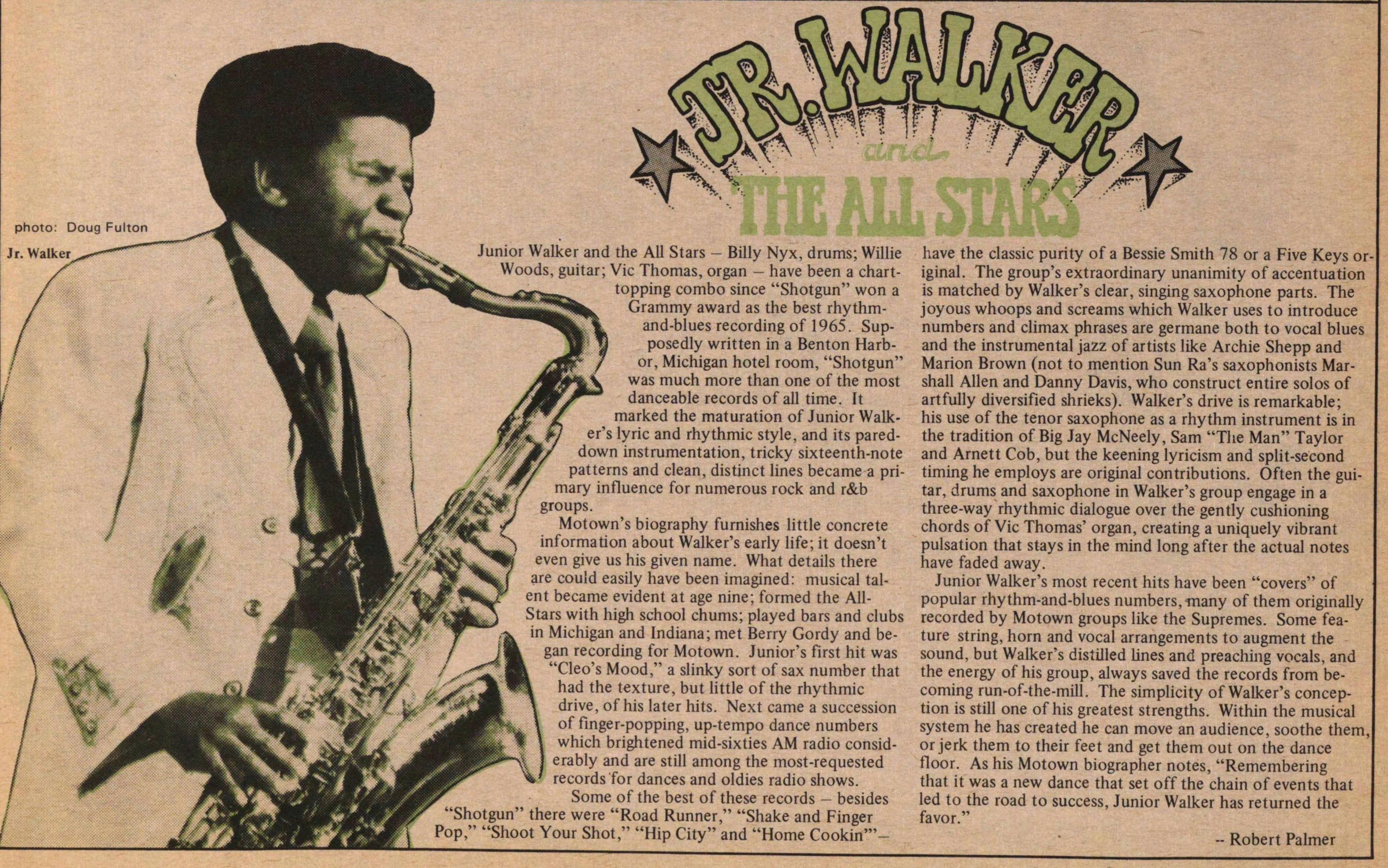 Junior Walker and the All Stars - Billy Nyx, drums; Willie Woods, guitar; Vic Thomas, organ - have been a topping combo since "Shotgun" won a Grammy award as the best rhythm-and-blues recording of 1965. Supposedly written in a Benton Harbor, Michigan hotel room, "Shotgun" was much more than one of the most danceable records of all time. It marked the maturation of Junior Walk - er's lyric and rhythmic style, and its pared-down instrumentation, tricky sixteenth-note pattens and clean, distinct lines became a primary influence for numerous rock and r&b groups.

Motown's biography furnishes little concrete information about Walker's early life; it doesn't even give us his given name. What details there are could easily have been imagined: musical talent became evident at age nine; formed the AllStars with high school chums; played bars and clubs in Michigan and Indiana; met Berry Gordy and began recording for Motown. Junior's first hit was "Cleo's Mood," a slinky sort of sax number that had the texture, but little of the rhythmic drive, of his later hits. Next came a succession of finger-popping, up-tempo dance numbers which brightened mid-sixties AM radio considerably and are still among the most-requested records Tor dances and oldies radio shows.

Some of the best of these records - besides Shotgun there were "Road Runner," "Shake and Finger Pop," "Snoot Your Shot," "Hip City" and "Home Cookin'''---have the classic  purity of Bessie Smith 78 or a Five Keys original.  The group's extraordinary unanimity of accentuation is matched by Walker's clear, singing saxophone parts. The joyous whoops and screams which Walker uses to introduce numbers and climax phrases are germane both to vocal blues and the instrumental jazz of artists like Archie Shepp and Marión Brown (not to mention Sun Ra's saxophonists Marshall Allen and Danny Davis, who construct entire solos of artfully diversified shrieks). Walker's drive is remarkable; his use of the tenor saxophone as a rhythm instrument is in the tradition of Big Jay McNeely, Sam "The Man" Taylor and Arnett Cob, but the keening lyricism and split-second timing he employs are original contributions. Often the guitar, drums and saxophone in Walker's group engage in a three-way rhythmic dialogue over the gently cushioning chords of Vic Thomas' organ, creating a uniquely vibrant pulsation that stays in the mind long after the actual notes have faded away.

Junior Walker's most recent hits have been "covers" of popular rhythm-and-blues numbers, many of them originally recorded by Motown groups like the Supremes. Some feature string, horn and vocal arrangements to augment the sound, but Walker's distilled lines and preaching vocals, and the energy of his group, always saved the records from becoming run-of-the-mill. The simplicity of Walker's conception is still one of his greatest strengths. Within the musical system he has created he can move an audience, soothe them, or jerk them to their feet and get them out on the dance floor. As his Motown biographer notes, "Remembering that it was a new dance that set off the chain of events that led to the road to success, Junior Walker has returned the favor."