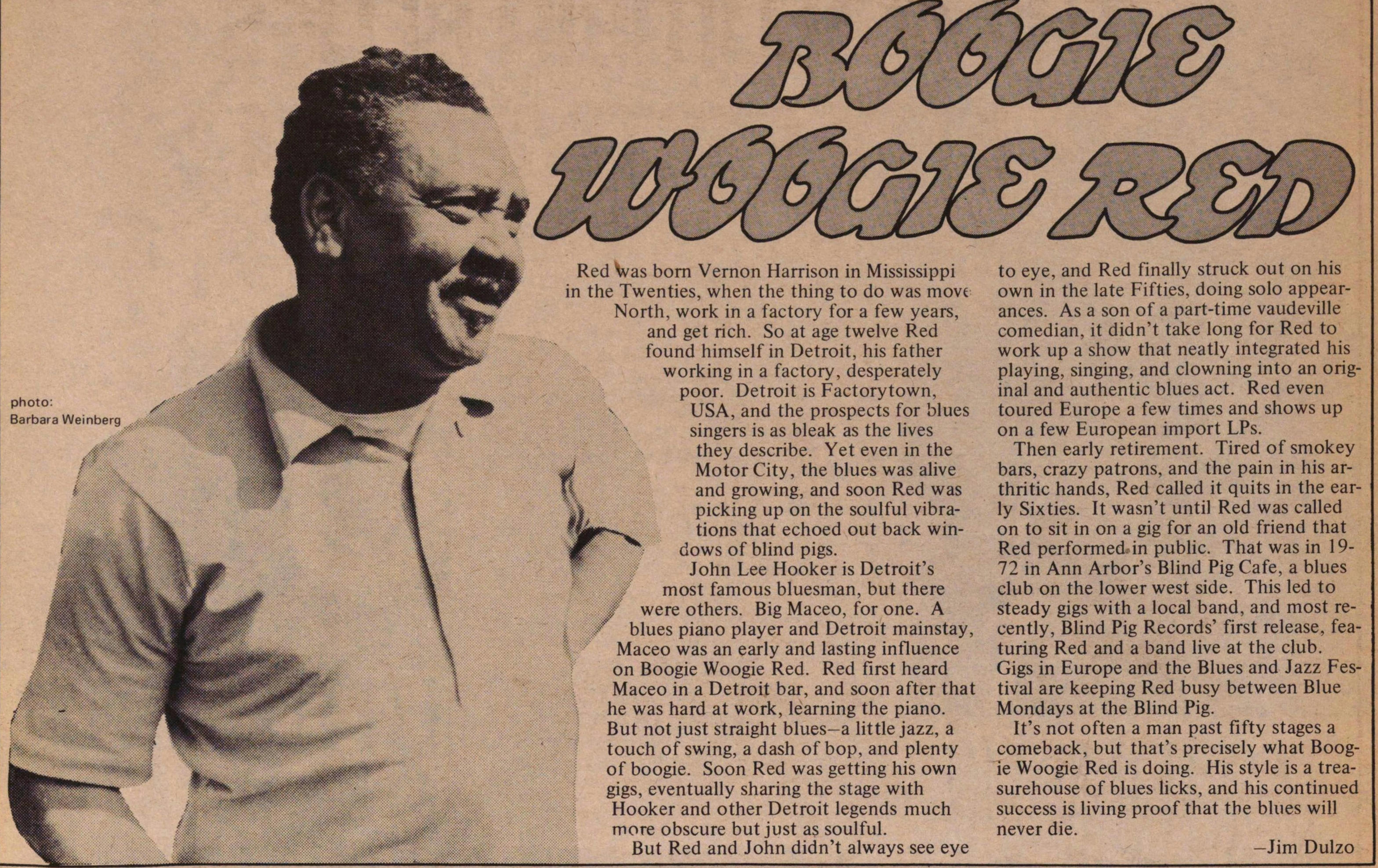 Red Was born Vernon Harrison in Mississippi in the Twenties, when the thing to do was move North, work in a factory for a few years, and get rich. So at age twelve Red found himself in Detroit, his father working in a factory, desperately poor. Detroit is Factory town, USA, and the prospects for blues singers is as bleak as the lives they describe. Yet even in the Motor City, the blues was alive and growing, and soon Red was picking up on the soulful vibrations that echoed out back windows of blind pigs.

John Lee Hooker is Detroit's most famous bluesman, but there were others. Big Maceo, for one. A blues piano player and Detroit mainstay, Maceo was an early and lasting influence on Boogie Woogie Red. Red first heard Maceo in a Detroit bar, and soon after that he was hard at work, learning the piano. But not just straight blues- a little jazz, a touch of swing, a dash of bop, and plenty of boogie. Soon Red was getting his own gigs, eventually sharing the stage with Hooker and other Detroit legends much more obscure but just as soulful.

But Red and John didn't always see eye to eye, and Red finally struck out on his own in the late Fifties, doing solo appearances. As a son of a part-time vaudeville comedian, it didn't take long for Red to work up a show that neatly integrated his playing, singing, and clowning into an original and authentic blues act. Red even toured Europe a few times and shows up on a few European import LPs.

Then early retirement. Tired of smokey bars, crazy patrons, and the pain in his arthritic hands, Red called it quits in the early Sixties. It wasn't until Red was called on to sit in on a gig for an old friend that Red performed.in public. That was in 1972 in Ann Arbor's Blind Pig Cafe, a blues club on the lower west side. This led to steady gigs with a local band, and most recently, Blind Pig Records' first release, featuring Red and a band live at the club. Gigs in Europe and the Blues and Jazz Festival are keeping Red busy between Blue Mondays at the Blind Pig.

It's not often a man past fifty stages a comeback, but that's precisely what Boogie Woogie Red is doing. His style is a treasure house of blues licks, and his continued success is living proof that the blues will never die.