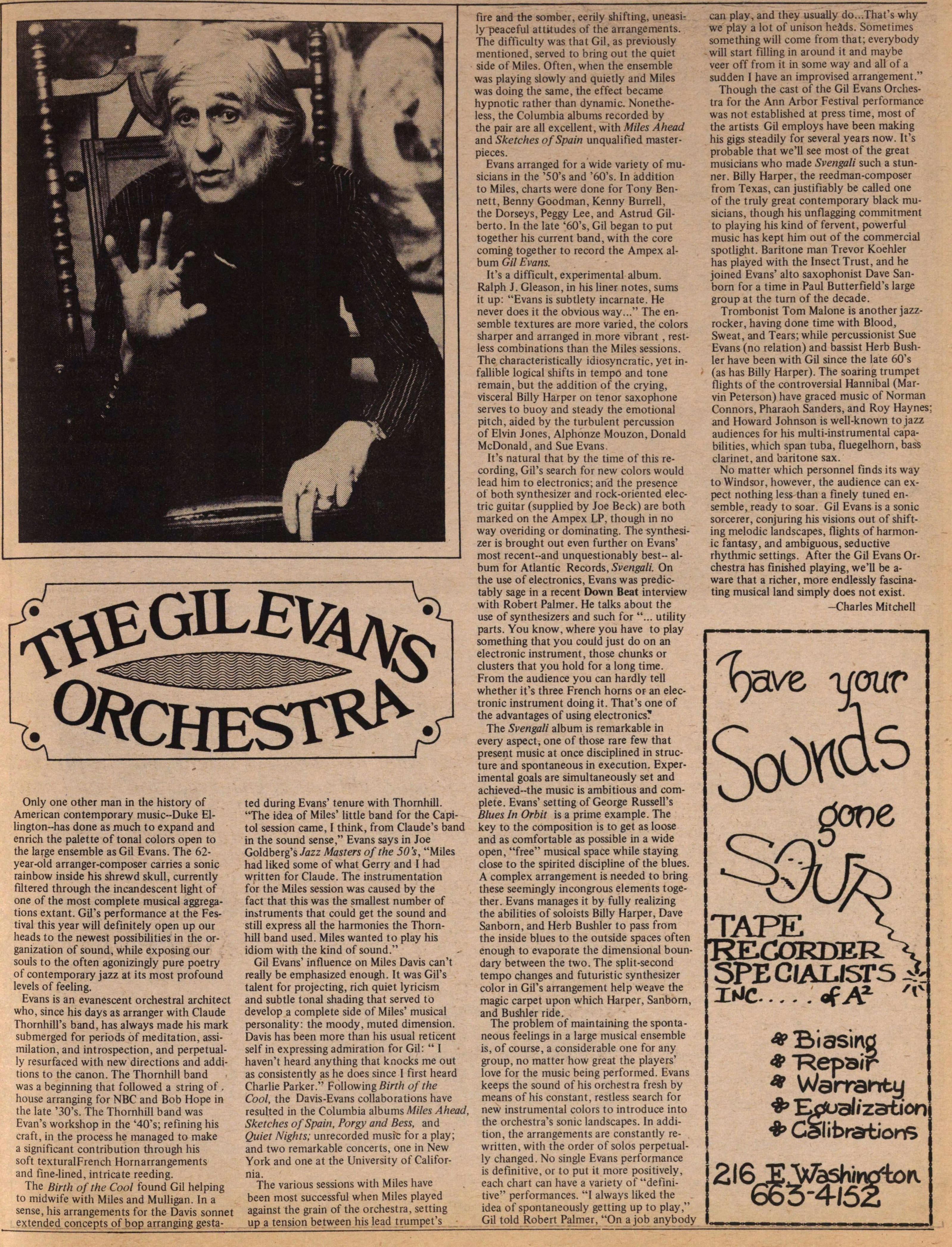 Only one other man in the history of American contemporary music--Duke Ellington--has done as much to expand and enrich the palette of tonal colors open to the large ensemble as Gil Evans. The 62year-old arranger-composer carries a sonic rainbow inside his shrewd skull, currently filtered through the incandescent light of one of the most complete musical aggregations extant. Gil's performance at the Festival this year will definitely open up our heads to the newest possibilities in the organization of sound, while exposing our souls to the often agonizingly pure poetry of contemporary jazz at its most profound levels of feeling.

Evans is an evanescent orchestral architect who, since his days as arranger with Claude Thornhill's band, has always made his mark submerged for periods of meditation, assimilation, and introspection, and perpetually resurfaced with new directions and additions to the canon. The Thornhill band was a beginning that followed a string of house arranging for NBC and Bob Hope in the late '30's. The Thornhill band was Evan's workshop in the '40's; refining his craft, in the process he managed to make a significant contribution through his soft textural French Horn arrangements and fine-lined, intricate reeding.

The Birth of the Cool found Gil helping to midwife with Miles and Mulligan. In a sense, his arrangements for the Davis sonnet extended concepts of bop arranging gestated during Evans' tenure with Thornhill. "The idea of Miles' little band for the Capitol session came, I think, from Claude's band in the sound sense," Evans says in Joe Goldberg's Jazz Masten of the 50's, "Miles had liked some of what Gerry and I had written for Claude. The instrumentation for the Miles session was caused by the fact that this was the smallest number of instruments that could get the sound and still express all the harmonies the Thornhill band used. Miles wanted to play his idiom with the kind of sound."

Gil Evans' influence on Miles Davis can't really be emphasized enough. It was Gil's talent for projecting, rich quiet lyricism and subtle tonal shading that served to develop a complete side of Miles' musical personality: the moody, muted dimensión. Davis has been more than his usual reticent self in expressing admiration for Gil: "I haven't heard anything that knocks me out as consistently as he does since I first heard Charlie Parker." Following Birth of the Cool, the Davis-Evans collaborations have resulted in the Columbia albums Miles Ahead, Sketches of Spain, Porgy and Bess, and Quiet Nights; unrecorded music for a play; and two remarkable concerts, one in New York and one at the University of California.

The various sessions with Miles have been most successful when Miles played against the grain of the orchestra, setting up a tension between his lead trumpet's fire and the somber, eerily shifting, uneasily peaceful attitudes of the arrangements. The difficulty was that Gil, as previously mentioned, served to bring out the quiet side of Miles. Often, when the ensemble was playing slowly and quietly and Miles was doing the same, the effect became hypnotic rather than dynamic. Nonetheless, the Columbia albums recorded by the pair are all excellent, with Miles Ahead and Sketches of Spain unqualified masterpieces.

Evans arranged for a wide variety of musicians in the '50's and '60's. In addition to Miles, charts were done for Tony Bennett, Benny Goodman, Kenny Burrell, the Dorseys, Peggy Lee, and Astrud Gilberto. In the late '60's, Gil began to put together his current band, with the core coming together to record the Ampex album Gil Evans.

It's a difficult, experimental album. Ralph J. Gleason, in his liner notes, sums it up: "Evans is subtlety incarnate. He never does it the obvious way..." The ensemble textures are more varied, the colors sharper and arranged in more vibrant, restless combinations than the Miles sessions. The characteristically idiosyncratic, yet infallible logical shifts in tempo and tone remain, but the addition of the crying, visceral Billy Harper on tenor saxophone serves to buoy and steady the emotional pitch, aided by the turbulent percussion of Elvin Jones, Alphonze Mouzon, Donald McDonald, and Sue Evans.

It's natural that by the time of this recording, Gil's search for new colors would lead him to electronics; and the presence of both synthesizer and rock-oriented electric guitar (supplied by Joe Beek) are both marked on the Ampex LP, though in no way overiding or dominating. The synthesizer is brought out even further on Evans' most recent--and unquestionably best--album for Atlantic Records, Svengali. On the use of electronics, Evans was predictably sage in a recent Down Beat interview with Robert Palmer. He talks about the use of synthesizers and such for "... utility parts. You know, where you have to play something that you could just do on an electronic instrument, those chunks or clusters that you hold for a long time. From the audience you can hardly teil whether it's three French horns or an electronic instrument doing it. That's one of the advantages of using electronics."

The Svengali album is remarkable in every aspect, one of those rare few that present music at once disciplined in structure and spontaneous in execution. Experimental goals are simultaneously set and achieved--the music is ambitious and complete. Evans' setting of George Russell's Blues In Orbit is a prime example. The key to the composition is to get as loose and as comfortable as possible in a wide open, "free" musical space while staying close to the spirited discipline of the blues. A complex arrangement is needed to bring these seemingly incongrous elements together. Evans manages it by fully realizing the abilities of soloists Billy Harper, Dave Sanborn, and Herb Bushler to pass from the inside blues to the outside spaces often enough to evaporate the dimensional boundary between the two. The split-second tempo changes and futuristic synthesizer color in Gil's arrangement help weave the magie carpet upon which Harper, Sanborn, and Bushler ride.

The problem of maintaining the spontaneous feelings in a large musical ensemble is, of course, a considerable one for any group, no matter how great the players' love for the music being performed. Evans keeps the sound of his orchestra fresh by means of his constant, restless search for new instrumental colors to introduce into the orchestra's sonic landscapes. In addition, the arrangements are constantly rewritten, with the order of solos perpetually changed. No single Evans performance is definitive, or to put it more positively, each chart can have a variety of "definitive" performances. "I always liked the idea of spontaneously getting up to play," Gil told Robert Palmer, "On a job anybody can play, and they usually do...That's why we play a lot of unison heads. Sometimes something will come from that; everybody will start filling in around it and maybe veer off from it in some way and all of a sudden I have an improvised arrangement."

Though the cast of the Gil Evans Orchestra for the Ann Arbor Festival performance was not established at press time, most of the artists Gil employs have been making his gigs steadily for several years now. It's probable that we'll see most of the great musicians who made Svengali such a stunner. Billy Harper, the reedman-composer from Texas, can justifiably be called one of the truly great contemporary black musicians, though his unflagging commitment to playing his kind of fervent, powerful music has kept him out of the commercial spotlight. Baritone man Trevor Koehler has played with the Insect Trust, and he joined Evans' alto saxophonist Dave Sanborn for a time in Paul Butterfield's large group at the turn of the decade.

Trombonist Torn Malone is another jazz-rocker, having done time with Blood, Sweat, and Tears; while percussionist Sue Evans (no relation) and bassist Herb Bushler have been with Gil since the late 60's (as has Billy Harper). The soaring trumpet flights of the controversial Hannibal (Marvin Peterson) have graced music of Norman Connors, Pharaoh Sanders, and Roy Haynes; and Howard Johnson is well-known to jazz audiences for his multi-instrumental capabilities, which span tuba, fluegelhorn, bass clarinet, and baritone sax.

No matter which personnel finds its way to Windsor, however, the audience can expect nothing less than a fïnely tuned ensemble, ready to soar. Gil Evans is a sonic sorcerer, conjuring his visions out of shifting melodic landscapes, flights of harmonic fantasy, and ambiguous, seductive rhythmic settings. After the Gil Evans Orchestra has finished playing, we'll be aware that a richer, more endlessly fascinating musical land simply does not exist.