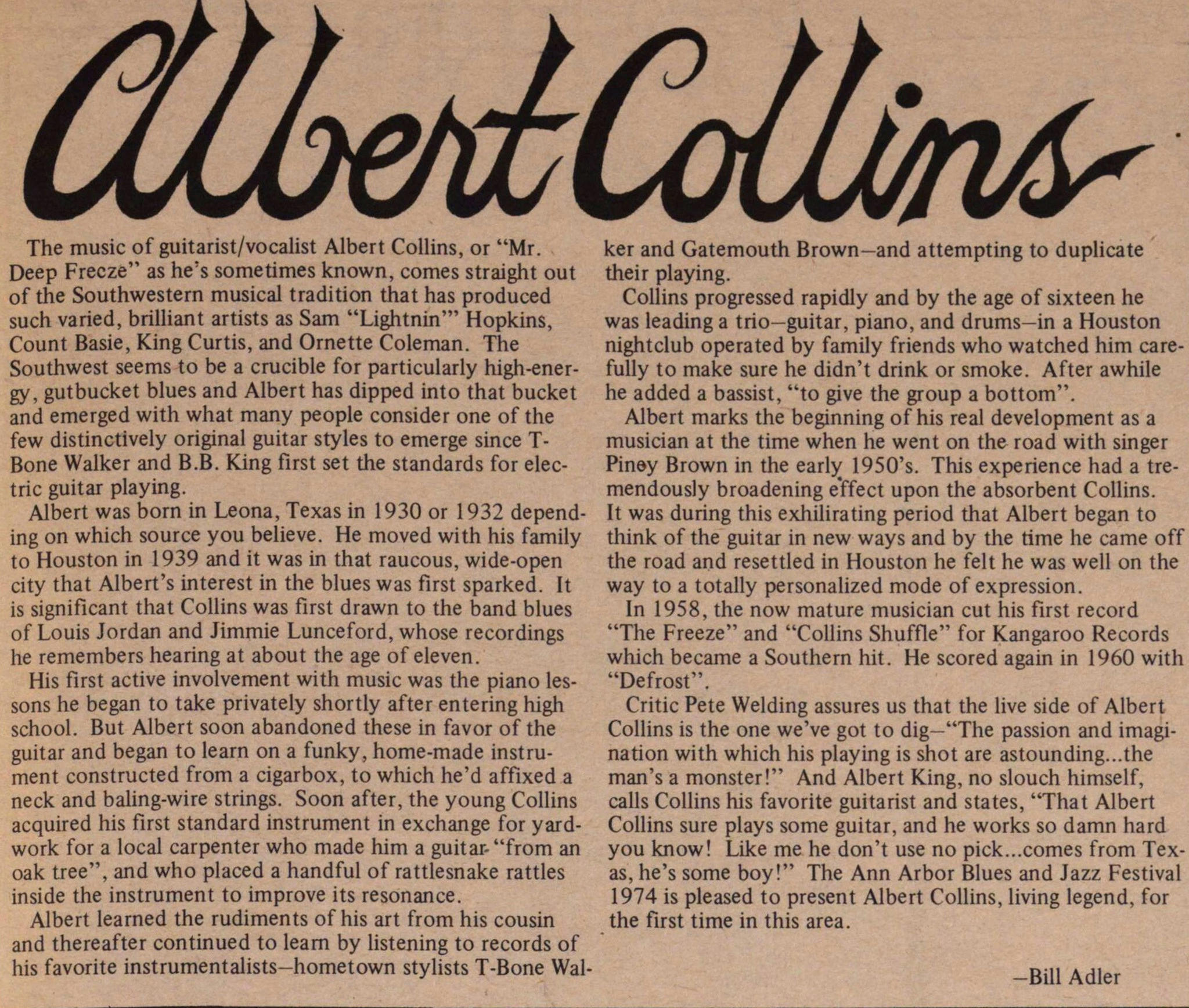 The music of guitarist/vocalist Albert Collins, or "Mr. Deep Freeze" as he's sometimes known, comes straight out of the Southwestern musical tradition that has produced such varied, brilliant artists as Sam "Lightnin'" Hopkins, Count Basie, King Curtis, and Ornette Coleman. The Southwest seems to be a crucible for particularly high-energy, gutbucket blues and Albert has dipped into that bucket and emerged with what many people consider one of the few distinctively original guitar styles to emerge since T-Bone Walker and B.B. King first set the standards for electric guitar playing.

Albert was bom in Leona, Texas in 1930 or 1932 depending on which source you believe. He moved with his family to Houston in 1939 and it was in that raucous, wide-open city that Albert's interest in the blues was first sparked. It is significant that Collins was first drawn to the band blues of Louis Jordan and Jimmie Lunceford, whose recordings he remembers hearing at about the age of eleven.

His first active involvement with music was the piano lessons he began to take privately shortly after entering high school. But Albert soon abandoned these in favor of the guitar and began to learn on a funky, home-made instrument constructed from a cigarbox, to which he'd affixed a neck and bailing-wire strings. Soon after, the young Collins acquired his first Standard instrument in exchange for yardwork for a local carpenter who made him a guitar "from an oak tree", and who placed a handful of rattlesnake rattles inside the instrument to improve its resonance.

Albert learned the rudiments of his art from his cousin and thereafter continued to learn by listening to records of his favorite instrumentalists--hometown stylists T-Bone Walker and Gatemouth Brown--and attempting to duplicate their playing.

Collins progressed rapidly and by the age of sixteen he was leading a trio--guitar, piano, and drums--in a Houston nightclub operated by family friends who watched him carefully to make sure he didn't drink or smoke. After awhile he added a bassist, "to give the group a bottom".

Albert marks the beginning of his real development as a musician at the time when he went on the road with singer Piney Brown in the early 1950's. This experience had a tremendously broadening effect upon the absorbent Collins. It was during this exhilarating period that Albert began to think of the guitar in new ways and by the time he came off the road and resettled in Houston he felt he was well on the way to a totally personalized mode of expression.

In 1958, the now mature musician cut his first record "The Freeze" and "Collins Shuffle" for Kangaroo Records which became a Southern hit. He scored again in 1960 with "Defrost".

Critic Pete Weiding assures us that the live side of Albert Collins is the one we've got to dig--"The passion and imagination with which his playing is shot are astounding...the man's a monster!" And Albert King, no slouch himself, calis Collins his favorite guitarist and states, "That Albert Collins sure plays some guitar, and he works so damn hard you know! Like me he don't use no pick. ..comes from Texas, he's some boy!" The Ann Arbor Blues and Jazz Festival 1974 is pleased to present Albert Collins, living legend, for the first time in this area.