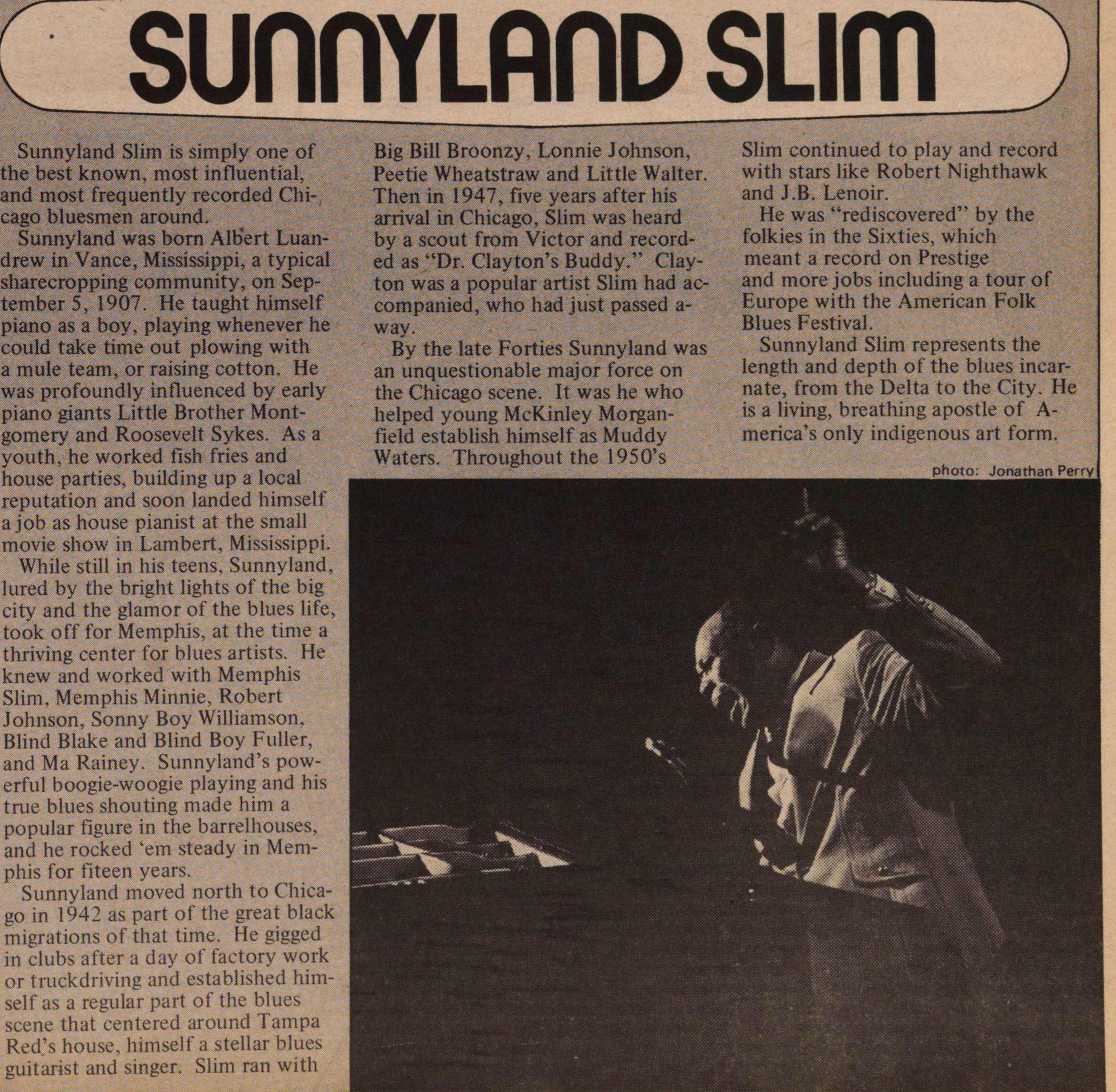 Sunnyland Slim is simply one of the best known, most influential, and most frequently recorded Chicago bluesmen around.

Sunnyland was bom Albert Luandrew in Vance, Missíssippi, a typical sharecropping community, on September 5, 1907. He taught himself piano as a boy, playing whenever he could take time out plowing with a mule team, or raising cotton. He was profoundly influenced by early piano giants Little Brother Montgomery and Roosevelt Sykes. As a youth, he worked fish fries and house parties, building up a local reputation and soon landed himself a job as house pianist at the small movie show in Lambert, Mississippi.

While still in his teens, Sunnyland, lured by the bright lights of the big city and the glamor of the blues life, took off for Memphis, at the time a thriving center for blues artists. He knew and worked with Memphis Slim, Memphis Minnie, Robert Johnson, Sonny Boy Williamson, Blind Blake and Blind Boy Fuller, and Ma Rainey. Sunnyland's powerful boogie-woogie playing and his true blues shouting made him a popular figure in the barrelhouses, and he rocked 'em steady in Memphis for fifteen years.

Sunnyland moved north to Chicago in 1942 as part of the great black migrations of that time. He gigged in clubs after a day of factory work or truckdriving and established himself as a regular part of the blues scene that centered around Tampa Red's house, himself a stellar blues guitarist and singer. Slim ran with Big Bill Broonzy, Lonnie Johnson, Peetie Wheatstraw and Little Walter. Then in 1947, fïve years after his arrival in Chicago, Slim was heard by a scout from Victor and recorded as "Dr. Clayton's Buddy." Clayton was a popular artist Slim had accompanied, who had just passed away.

By the late Forties Sunnyland was an unquestionable major force on the Chicago scene. It was he who helped young McKinley Morganfield establish himself as Muddy Waters. Throughout the 1950's Slim continued to play and record with stars like Robert Nighthawk and J.B. Lenoir.

He was "rediscovered" by the folkies in the Sixties, which meant a record on Prestige and more jobs including a tour of Europe with the American Folk Blues Festival. Sunnyland Slim represents the length and depth of the blues incarnate, from the Delta to the City. He is a living, breathing apostle of America's only indigenous art form.